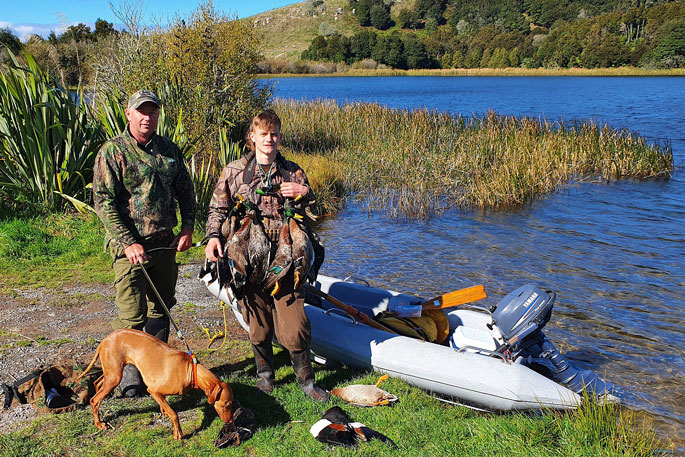 Nigel and Jack Sands of Rotorua with a good bag of ducks. Supplied photo.

Duck shooters are reporting success for the opening weekend of the game bird hunting season.

Hunters in the greater Rotorua and Bay of Plenty areas were greeted with less than ideal, clear weather conditions for the opening.

Gisborne and the East coast started the day with perfect, wet and windy weather for duck hunting.

Despite the conditions, many hunters around the region met with success, although duck numbers were generally down on previous seasons.

Around the Gisborne area, mallard and grey duck numbers were low with many farm ponds being dry.

“When it’s tough, hunters have to work a little harder and longer to get the results they’re after. Hopefully weather conditions will be a bit more favourable for hunting as the season progresses,” he says.

Some locations throughout the Eastern Fish & Game regions also suffered from low water resulting from a dry autumn period.

At times like these it’s often the permanent water bodies such as large lakes and rivers that tend to attract the ducks more.

Teams of rangers, assisted by police, were active throughout the region and reported good compliance levels.

Several new regulations have come into force over the last few seasons and hunters have generally accepted these new rules well.

Three hunters had their firearms seized by Fish & Game rangers, one because he was hunting without a licence and the others because their guns hadn’t been restricted to hold no more than two rounds in the magazine.

Rangers were pleased to see a number of family groups enjoying the weekend. Duck hunting is a tradition that goes back over 100 years in New Zealand with some families sharing time together to put healthy food on their tables.

The mallard and grey duck season runs until May 30 in the Eastern Region, whereas pheasant and quail can be hunted until August 29.