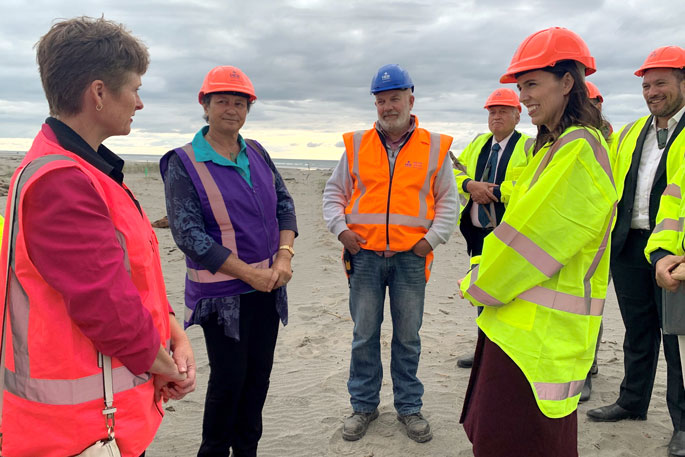 A major milestone in Opotiki's history has been marked with a visit from Prime Minister Jacinda Ardern.

Construction is due to start on the town's multi-million dollar Government-funded harbour project next week, and the Prime Minister with the Minister of Economic and Regional Development Stuart Nash visited Opotiki to mark the historic event.

Ardern says the various projects on the go right now in Opotiki, from the harbour, to the mussel factory, to marae upgrades were about more than providing jobs.

They provided hope for the community.

"These investments out here are about more than just building and driving a local economy, they are about hope," she says.

The Government has invested more than $117 million through the Provincial Growth Fund into the Opotiki community.

The PGF was originally a project of New Zealand First and particularly former MP Shane Jones in the last Parliamentary term. Neither was re-elected to Parliament.

While at Terere Marae, just outside of Opotiki, the Prime Minister was able to hear from those directly impacted through a show and tell of projects in the marae hall.

Williams says without the Government's investment the marae would not have been able to replace its boundary fencing, renovate its manuhiri (visitor) shelter, or replace its wharenui roof.

He says the work has employed 11 people and six completed NZQA construction certificates.

It has employed young people to renovate the housing and learn skills as they do it.

Youth mentor Troy Hart-Webb says without the funding it would have been much harder for the trust to do that.

He is now hoping the trust can get funding for a workshop for its young employees.

Funding has allowed the programme to purchase practical equipment, like saws, for their young people to use.

Ardern says there's nothing like hearing the difference a project was making in the lives of whanau and the community.

"To see and hear that was really moving," she says.

"We have been talking about these projects as ministers and MPs for a long time but here we see them not only underway but already making a significant difference in the lives of our people. To hear stories from our young people, the enthusiasm they have for the work they are doing, the legacy they know it's going to leave, knowing they will be able to drive past the harbour project they have been involved in and see the difference they have made - that's awesome."

Ardern says the Government has focused on communities where it knew funding would make the biggest difference.

"Opotiki had done the work, all they needed was partner to make it happen."

Nash says the projects in Opotiki represented true partnership between council, iwi and the Government.

He says the partnership would change Opotiki's deprivation levels - levels that weren't acceptable in a country like New Zealand.

"This partnership will change that," says Mr Nash.

"There are 1225 direct jobs. With every job comes opportunities. Opportunities for people to earn a living, for families, for communities to be part of something great."

Opotiki Mayor Lyn Riesterer says the last time she saw the Prime Minister she couldn't thank her, as she had broken down in tears of gratitude.

However, she was able to do so this time.

"What does hope and success look like to us," Riesterer says.

"Could it be the three cranes in our skyline at the same time? When have we ever seen that before? Thank you for your confidence in us and ensuring we have the capability to succeed. We've needed that." 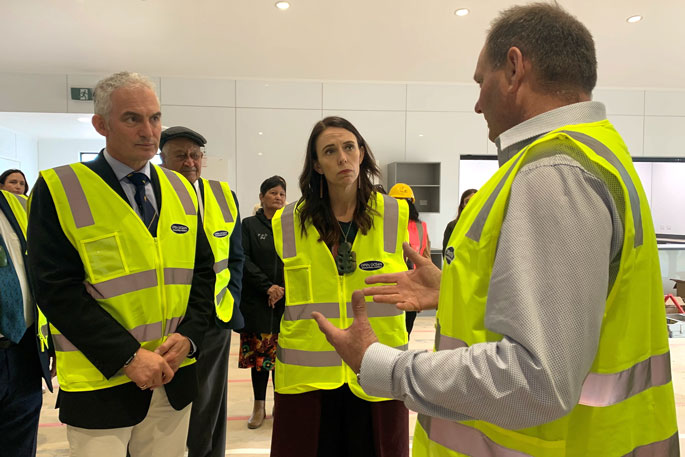 Those celebrating the milestone said Opotiki's next challenge was to ensure there were affordable homes and rentals for its growing workforce.

Only last month a protest march was held in the town about the cost of housing.

Local Labour list MP Tamati Coffey says by stimulating the economy there has been a knock-on impact on housing in Opotiki.

"But that's great, because no one was talking like this about Opotiki a few years ago," he said.
"People follow the jobs and there's heaps of jobs here in Opotiki."

Coffey says he has been talking with other ministers and the Prime Minister about the housing issue and what the Government could do to help solve it.

He says the problem shows Opotiki is now doing well but needed the homes to continue to attract skilled workers.

And when they find that it doesn’t produce long term sustainable jobs, they will simply borrow another $117m and do it again.

Throwing good money after bad. Trying to revive a dead donkey. There is nothing to celebrate in this.