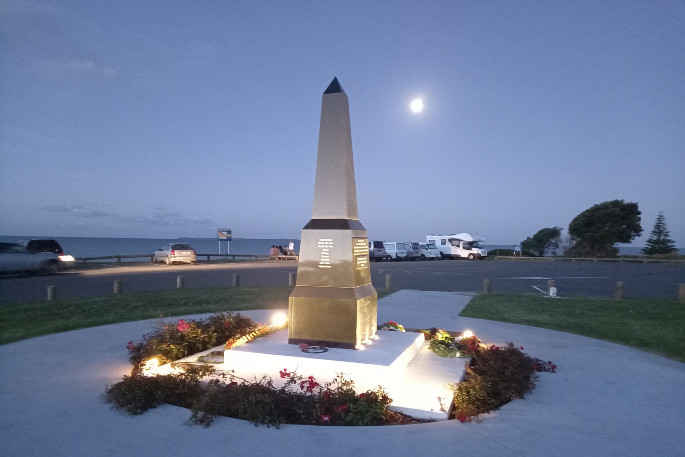 Over 2000 people attended the Papamoa Civic Memorial Service at the Papamoa cenotaph on Sunday, marking the first Anzac Day since the four stages of the cenotaph project have been completed, and the second time an Anzac service has been held since the cenotaph was erected.

“What a great turn out for the Anzac Civic Service, it was the best one yet,” says Michael O’Carroll who had raised the flags earlier at dawn.

The noon service, only the second Anzac Day civic service held since the cenotaph was installed in late 2018, began with people assembling on the grass near the Papamoa Pony Club. The march along Stella Place through the carpark took them to the memorial where the service was conducted. 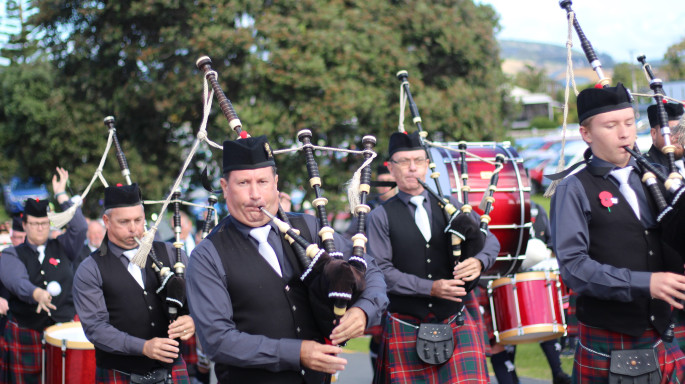 “Papamoa students, the local Army Unit and cadet force were absolutely outstanding. And Classic Flyers did a wonderful fly past,” says Michael.

Although there was no official dawn service planned, when Michael went to the cenotaph before sunrise to raise the New Zealand and Australian flags, he was joined by Warrant Officer Steve Clarke and Chief Petty Officer Rick Smith from the NZ Navy, and also by about 150 people. 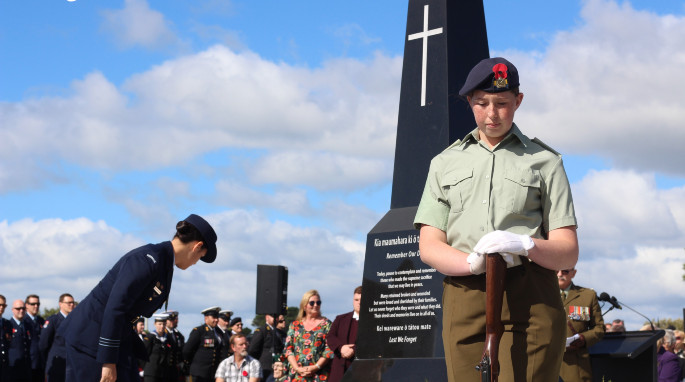 Michael has been a key driving force behind seeing the new war memorial cenotaph erected in Papamoa.

The black granite obelisk was installed in time for Armistice Day in November 2018, with the flagstaff in place for Anzac Day 2019.

“It is a community project which we fundraised almost exclusively from the Papamoa community,” says Mount/Papamoa ward councillor Steve Morris.

Steve says the cenotaph has been completed in four stages. 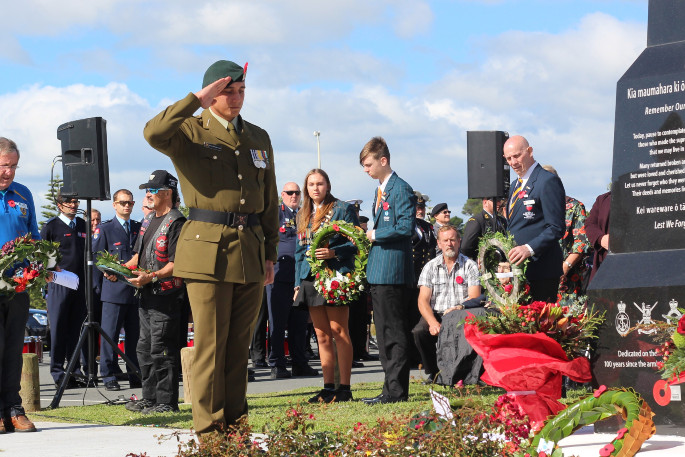 The first stage was when the three metre ground spire went in, followed by stage two - getting all the lighting hooked up, which was completed in time for Anzac Day in 2019.

“The third stage is the 12 metre flagstaff, donated by the Farmer Motor Group”, says Steve.

The flagstaff is similar to the flagstaff at Gate Pa, which was also donated by the Farmer Motor Group, but it is more suited to marine conditions being close to the beach.

The final elements of a wall, seating and landscaping were installed in October 2020, thanks to the generosity of many locals. 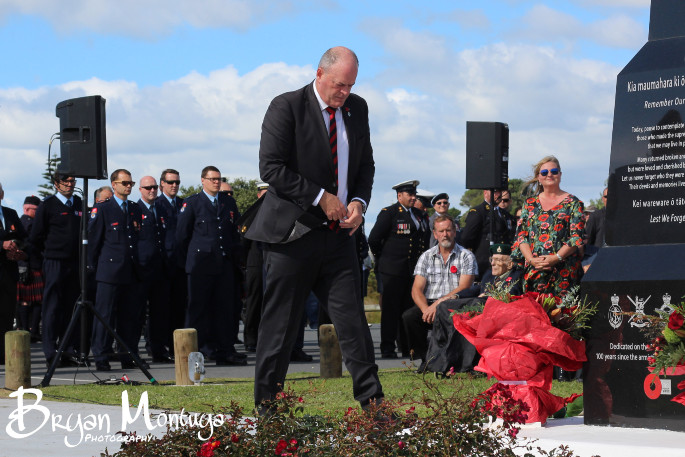 “The last part of the landscaping design is a World War 1 type trench,” says Michael.

“There is seating on the front part of the wall so local folk can go up to the memorial, sit down and spend time to reflect and remember our current servicemen and women and also our veterans and fallen heroes.”

The main sponsors for the wall and seating have been Robyn and Peter Whale from Spray Technologies Ltd, Bruce and Donna Crosby from Papamoa Beach Resort, and Baseup, with Tom Cullen and Jason Muir from BaseUp designing the seating plan. 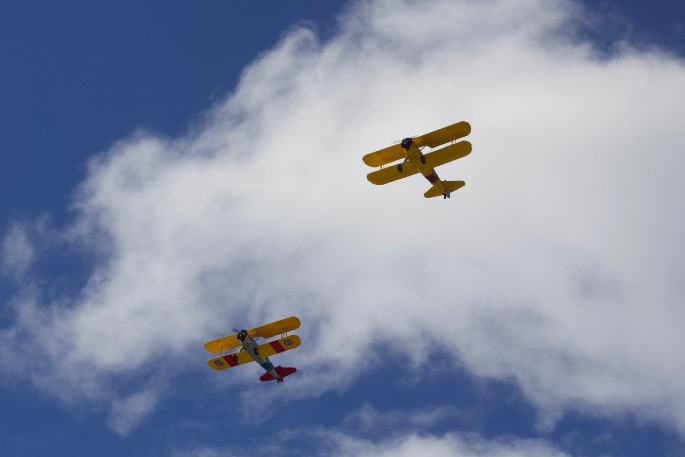 “It's been a long journey with Michael O’Carroll over the past few years,” says Mount/Papamoa ward councillor Steve Morris.

“We've raised more than $50,000 in cash and in kind for the cenotaph, flagstaff and landscaping.

“It's a place Papamoa can be proud of and I hope, honours our fallen heroes in a way they'd approve of. Farmer Motor Group didn't need much convincing to generously donate the $20,000 flagstaff.”

Steve says what once was a gravel pit has now become “a beautifully landscaped memorial overlooking the Pacific”.

“It's humbling to think of the generosity of our community but it's not surprising. This is the same community that mobilised 8000 volunteers to make our beach pristine again after the Rena Oil spill,” says Steve. 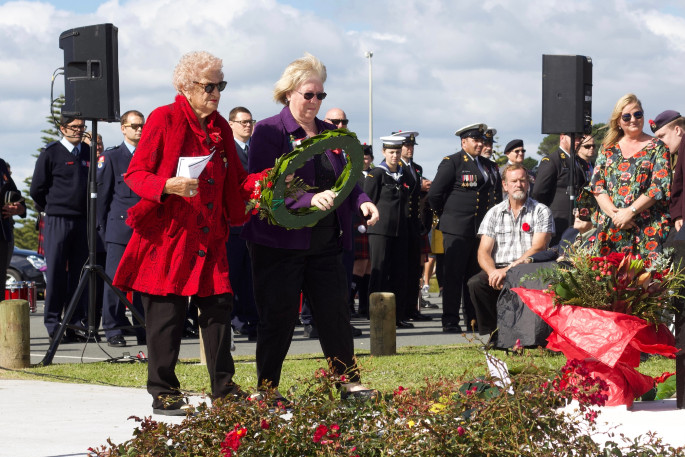 Last year, the Alert 4 lockdown meant that the much-anticipated Anzac Day service at the new Papamoa cenotaph was unable to be held. Not so this year, with Michael and the flags ready to go.

“I was up at 0530 to raise the flags for dawn, then people started to arrive even though there was no Dawn Service. Warrant Officer Steve Clarke and family brought along a boom box so we tuned into Radio NZ and followed their service up to the laying of wreaths,” says Michael.

“Then we turned off the radio, did the Last Post, and one minute’s silence followed by the Ode. On completion Steve’s wife played our National Anthem to finish off. About 150 Papamoa people turned up. It was amazing.”

Before ‘The Last Post’ was played, the two navy officers lowered the flags to halfmast. On completion of ‘The Last Post’ both flags were raised to the top of the mast. During the Civic Service later in the morning the procedure was repeated.

“Well done Navy. Thank you to all who attended the service,” says Michael.