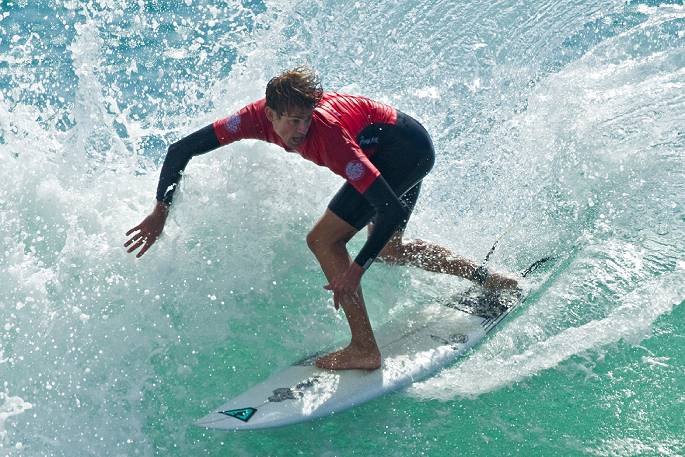 This weekend’s Backdoor Pro presented by Billabong marks the final qualifying event of the season for the NZ Surf Series.

Surfers from around the country are heading to Taranaki for the event and they are eyeing up valuable qualification points to make it through to the NZ Surf Series Final being held in two weeks.

The top sixteen males and eight females will contest the final event of the year at Piha and double that amount of surfers are in contention to qualify after a close summer season of events.

The Raglan surfer, now based at Mount Maunganui, has won back-to-back events at Raglan and Christchurch plus finished runner up in the season-opening National Championships at Piha.

"Hutchison’s dominant run this season is going to be hard to chase down for his opponents.

"One of his closest rivals would need to make a major push to bridge the 1600 point gap between Hutchison and the chasing pack.

"One such surfer is Taranaki’s Daniel Farr who currently sits in second position overall.  Farr will be in home waters this weekend and will search for his first finals berth of the season," says Surfing New Zealand.

"Tokyo 2020 bound Billy Stairmand (Rag) is fresh back from Australia and will contest the event this weekend. After a recent 14-day stint in quarantine, Stairmand contested the Christchurch event last weekend but came up short in the semifinals to finish seventh overall.

"He will want to bounce back this weekend with just the two competitive outings ahead of him before going to the Olympics in July."

At the back end of the qualifiers it will be the likes of Dune Kennings (Piha), Callum Chuter (Mnt) and Tom Robinson (Whngrei) that will be looking to hold on to their national rankings of 14-16 to make the cut for Piha.

That may be a hard task with the waves of Taranaki attracting the attention of ex-World Tour surfer Ricardo Christie (Gis) and Elliot Paerata – Reid (Piha).

Paerata – Reid is fresh back from Australia where he spent over six months surfing and competing on the Australasian Qualifying Series.

Vette’s counterparts are much closer behind than that of the chasing group in the Men’s Division and this will make for an intense finish to the season for the women.

"Hareb has only contested two events this season for a win at Raglan and a third place finish at the National Championships.

"A win this weekend would push her much closer to Vette and a final shot at the series in two weeks."

Local surfer Ariana Shewry and Georgia Wederell (Mnt) hold down the final two qualifying spots for the finals and they will be challenged by the likes of Aimee Brown (Grt Barrier) and Zhana Hutchieson (Tara) who will be looking to make the cut via a good performance this weekend.

The Backdoor Pro presented by Billabong includes the Under 18 Boys and Girls Divisions which have attracted a talented fields of the best young Kiwi surfers.

Mount Maunganui’s Jack Hinton goes into the event as the number one seed while Natasha Gouldsbury (Tara) goes in as the top seed for the girls.

The series started at Piha and has seen events held at Raglan, Dunedin, and Canterbury.

The final of the NZ Surf Series will be held at Piha on May 16.

The Backdoor Pro pres by Billabong will be contested over two days along Taranaki’s coastline with all finals being held on Sunday.

There is a building swell forecasted for Saturday afternoon and into Sunday with southeast winds expected to go lighter southwest on Sunday.

Please see below for the New Zealand Surf Series rankings.

Full rankings can be viewed here.