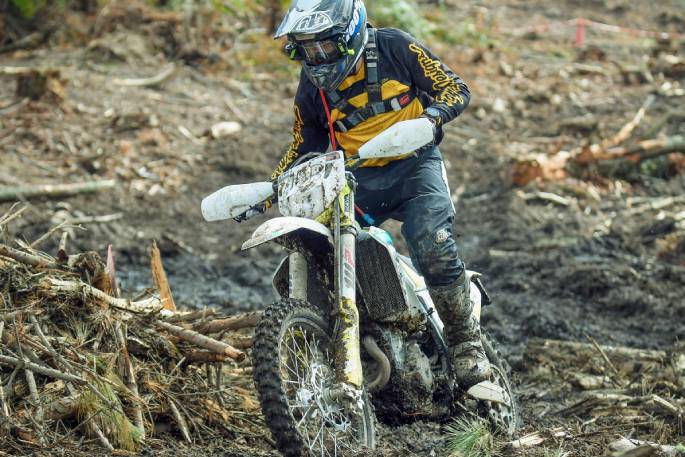 He was national enduro No.2 last season and Waikato rider Dylan Yearbury is on target for a podium finish this season too.

The 26-year-old builder from Cambridge took his distinctive white Husqvarna bike to finish overall runner-up in the 2020 New Zealand Enduro Championships and this year he's tipped to go even better, especially after his charge to the top of the standings in the early stages of the 2021 series.

Yearbury (Husqvarna FE350) finished in second position at the first of five rounds in the 2021 series near Tokoroa two weeks ago, completing the forestry course just 25 seconds behind the overall winner that day, Helensville's Tommy Buxton.

And so the battle lines were drawn between these two close friends and even closer rivals.

But the double-header round two in Marlborough at the weekend was time for Yearbury to provide an answer and his response was extremely positive, Yearbury winning the first of two days in Marlborough, 20 seconds ahead of Buxton, and then claiming second place overall on day two, returning to base at the end of racing just 54 seconds behind Oparau's James Scott.

These results were good enough for Yearbury to take over the series lead, a solid seven points clear of Buxton in second, with Scott third overall, just three points further back.

"It was not like a standard enduro in Marlborough," says Yearbury.

"For a start, it was an odd scoring system, with double points up for grabs once the results from both days were added together. With me finishing 1-2 over the two days, Tommy Buxton finishing 2-3 and James Scott 5-1, it meant I had the best combined score and won the Marlborough event overall.

"I'm in a good position now after finishing second at Tokoroa and first in Marlborough ... it couldn't have gone much better for me really.

"I have never before won the national enduro crown overall and that's the aim for me of course.

"I suffered a couple of crashes on Sunday (in Marlborough), but no real harm was done. In the first crash, I just hit a rock awkwardly and it skewed my front wheel down a bank. In the next crash, I was trying to get around a lapped rider in a rocky creek and didn't realise how deep the water was beside him and I went over the handlebars.

"It was all okay though and I didn't hurt myself or damage the bike. I just need to keep calm and carry on from here to get the job done."

There's a month-long break now before the competition resumes, when the riders head north again for round three of the series, another double-header, at Moonshine Valley, on the Kapiti Coast, on June 5-6.

All rounds are counted towards the championship overall, but riders are to count only four of their five results in terms of capturing an individual class win, ensuring it will also be tight to the finish in the chase for bike class honours.

In addition to holding the overall lead, Yearbury also leads the battle for the over-301cc four-stroke class title.