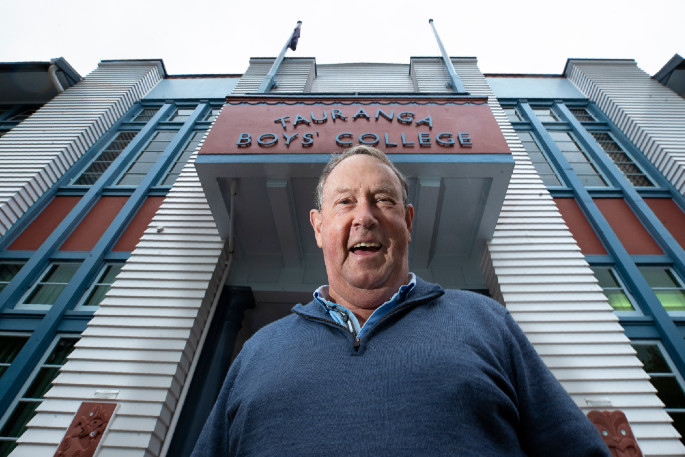 Students from a college and district high school that existed in Tauranga for just 11 years following World War II will be celebrating their 75th Jubilee in May.

“This may be the last year the annual reunion of the Tauranga College and Tauranga District High School will be held as many of the original pupils have now passed away,” says jubilee organiser Michael Sandlant.

Tauranga College existed from 1946 to 1957, before the female students left for the newly built Tauranga Girls’ College.

Secondary education in Tauranga dates from 1900 when the Tauranga District High School – TDHS – was established as a division of the existing Tauranga School at Fifth Ave.

The emphasis of the school at that time was to serve the needs of the vital agricultural economy and of a developing urban community dependent on the practical skills of carpenters, plumbers, electricians and other trades people.

By the mid-1930s it was becoming clear that the buildings were inadequate for the needs of the growing Tauranga district. Consequently the Education Board purchased the 10-acre block known as Hillsdene between Thirteenth and Fourteenth Aves and the adjoining ten-acre block.

Building the new school was delayed until 1944 due to the onset of World War II. By August 1945, the school was ready, and the movement of staff and students began, with the official opening of the new District High School in September 1945. There has been debate over the years about whether some of the students carried their desks the eight blocks from Fifth Ave to Hillsdene, with one resourceful student reportedly wheeling his desk on his bicycle.

Two days after opening, the education minister announced that the school at Hillsdene would become a secondary school with full independent status, and so Tauranga District High School became known as Tauranga College.

In addition to the furniture, the new school inherited the four houses Batten, Freyberg, Mansfield and Rutherford from the TDHS together with the tradition of sporting, academic, and cultural rivalries that went with them.

The new school did further distinguish itself from the old by extending the boys uniforms to include a school cap, which some students found to be useful for placing in their trousers before being caned.

The trees of Hillsdene provided a beautiful setting and were added to in 1947 with two kauris planted by the two head prefects. Years later at the 60th Jubilee in 2006, a new kauri was planted to replace one of them, with a plaque reading ‘Be like a tree in pursuit of your cause. Stand firm, grip hard, thrust upwards, bend to the winds of heaven and learn tranquility’.

Amongst the students was Lynley Dodd, author of books about Hairy Maclary.

In 1956, the student roll peaked at 1040. Building had commenced at a new site at Gate Pa, with Third Form girls starting the new school year there in 1957.  From 1958 onwards the Tauranga Girls’ College was a separate self-governing entity, and Tauranga College no longer existed as it became Tauranga Boys’ College.

The 75th Jubilee reunion of the Tauranga College and Tauranga District High School will be held on Sunday May 16 at the Citizens Club. Registrations can be made by emailing: tbc@tbc.school.nz or contacting Tauranga Boys’ College.