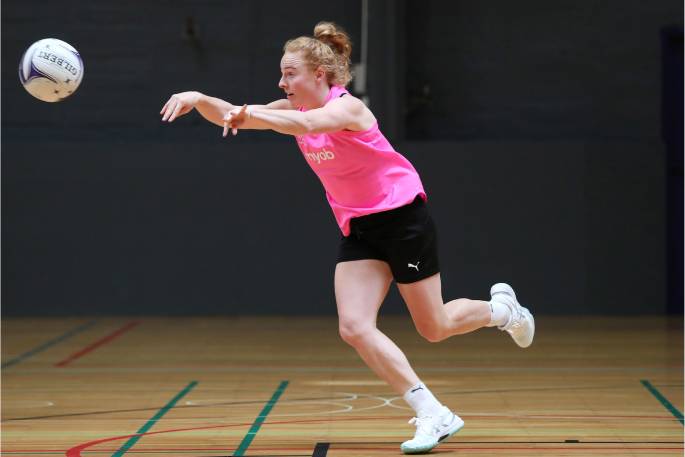 The new-look Splice Construction Magic have fittingly welcomed Australian shooter Caitlin Bassett into the ANZ Premiership with a 64-60 first-up victory over the Northern Mystics in Auckland.

In a game where the Mystics were always playing catch-up, but never leaped ahead, the Magic had enough firepower to pull away in the last five minutes.

Bassett, playing in her first domestic netball season in New Zealand, had a quiet start to the match but made her mark finishing with 36 shots from 41 attempts.

Magic captain Sam Winders was the calming influence in her side, bringing them back into focus whenever the Mystics launched a comeback.

The Magic got away to a flying start with new goal attack Chiara Semple, a Kiwi who’s been playing in England for five seasons, not afraid to turn and shoot when all the Mystics defenders were focused on Bassett.

With seven new players, the most for the 2021 season, the Magic established a five-goal buffer as the unsettled Mystics had trouble finding the hoop or the hands of goal shoot Grace Nweke.

The home side were under massive defensive pressure from Temalisi Fakahokotau and Erena Mikaere.

Bailey Mes, back from a long recovery from knee surgery, had to work overtime to get the ball into a safe shooting position.

After a game stoppage for a problem with a goalpost, when the Mystics were closing the gap to within two, the Magic rallied again to lead 14-11 at the first break.

ut a Sulu Fitzpatrick intercept turned into a goal in the dying seconds highlighted what the Mystics were capable of.

Grace Kara showed some of her old Magic, in her first game back since 2017, leading the visitors’ attack through the start of the second spell with sublime passing into Bassett.

The Australian captain began to find her feet, pulling in some crucial rebounds and flipping in her trademark under-the-hoop shots.

The Mystics fired in fits and starts. Fa’amu Ioane, the Star turned Mystic, showed no let up at wing defence, even with a bandaged hamstring, grabbing two intercepts. And a five goal difference was again sliced back to one.

Khiarna Williams came into the game at goal attack for the Magic and needed no warming up – quickly shooting and offloading to Bassett with precision.

The Mystics were quick to reply, replacing Mes with Filda Vui at goal attack. But at halftime the Magic were again in control by three, 31-28.

Georgia Tong came on as Magic goal keep for a quiet Fakahokotau after halftime, but with Vui getting her eye in and Toeava putting in some smart passes to Nweke, the Mystics drew level for the first time.

As the quarter wore on, Winders, the match MVP, became more adept at lobbing in to Bassett. And with the Mystics squandering ball into their shooters, the Magic pushed out to a 49-43 lead going into the final quarter.

But returning to the court fired-up, the Mystics went on a scoring blitz. Their midcourt and circle defenders Fitzpatrick and Kate Burley disrupted the Magic’s rhythm with Nweke more confident under the hoop, with 49 from 59 for the match, with Mes back as her shooting partner. Quickly they’d scored seven goals to the Magic’s one to get right back into the game at 50-50.

However, with the Magic reinjecting their starting line-up, they managed to take back control in the middle and owned the final minutes of the match to claim the win.