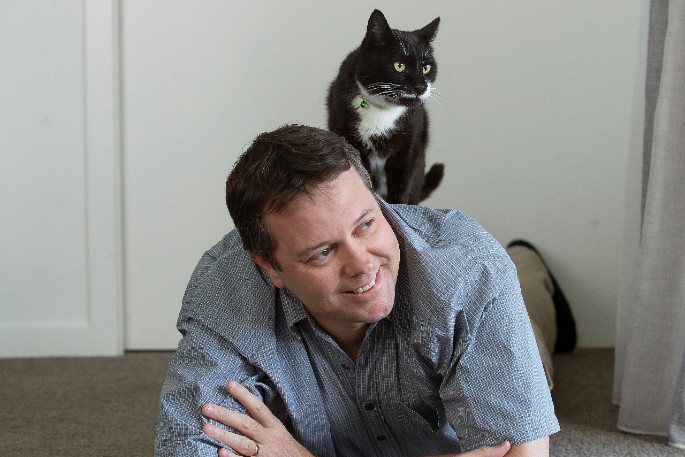 Peter Morgan is thrilled Dion recognised him after being gone for so long. Photo: John Borren.

A Papamoa couple feel like they are living in the twilight zone after being reunited with their cat, who disappeared four years ago.

Jo and Peter Morgan never expected to get a call saying their cat Dion had been found in Matamata; 70km away from where he went missing.

“It just feels like the twilight zone – he was here, he was gone and now he’s here again. Dreams do come true don’t they,” laughs Jo.

Four years ago, Dion went missing from their Papamoa home and Jo always held out hope that he would be found. She renewed the missing cat post fortnightly on Trade Me the entire time and paid his pet insurance for two years after he was gone.

“I've always said, I believe that one day someone will take him into a vet. And that's exactly what happened.”

Dion turned up on a Matamata farm around three weeks ago, after a week the farmer realised the tenacious cat wasn’t going away so took him to a vet.

After Dion’s microchip was scanned Jo was called and the following day Dion was on his way back home.

Jo and Peter have no idea how the mobile moggy ended up so far away.

“If only he could talk,” Jo muses.

Further adding to the mystery is another Papamoa cat, Tigger, went missing in September last year and he was found on the same Matamata farm six weeks later.

Tigger’s owner Pauline Broughton says it’s really weird he was found so far away because he normally doesn’t stray far from home.

She has no idea how he ended up there. Tigger has been known to sleep in their vehicles from time to time, so it’s possible he got in someone’s car.

Like Jo, Pauline remained hopeful Tigger would return; they called him every night and shook his treat jar because normally if he heard it, he would rush home.

When Pauline’s mum got the call that Tigger had been found they were overjoyed and emotional.

“We were all so happy. It's quite the relief to have him home.”

Jo’s husband Peter says it was a surprise to see Dion again unlike Jo, he thought Dion might have been hit by a car.

“It's been a long time. I'd actually given him up for lost.

“It was great to see his cheeky face again and he seemed to recognise me, even after four years.”

Dion is settling back into home life well, although it will take time to reintegrate into the ‘Morgan menagerie’ of two pugs and three other cats, he says.

“I think he wants to return to living the fine life rather than living out in the wild.”

He’s also a bit scrawny, with bones sticking out, so needs fattening up, says Peter.

Jo says finding Dion after so long proves the importance of having pets microchipped and that the microchip is registered with current owner contact details.

“That tiny little piece of technology is just so incredible.”

It’s unknown how many of Dion’s nine lives were used while he was away but he’s breaking the stereotype that black cats are unlucky.