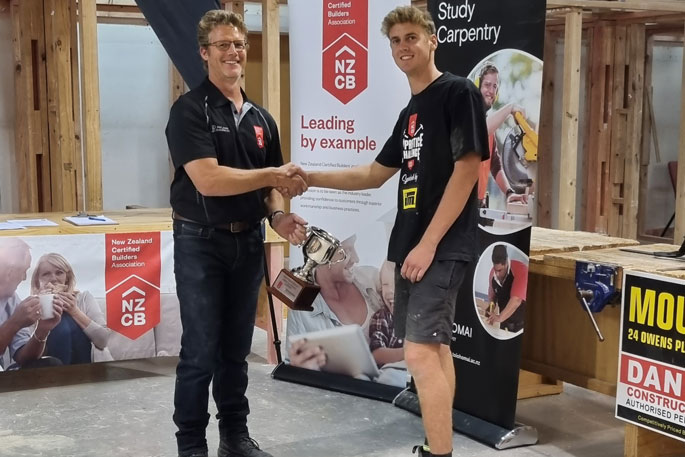 The 20-year-old competed against four other apprentices on April 10, where he was given just eight hours to build a picnic table that followed specific design plans and met minimum safety standards.

The picnic tables were assessed by a panel of expert judges who looked at technical aspects such as the quality of workmanship, measuring, cutting and assembly.

Other essential skills were also judged whilst the competitors worked against the clock, including their ability to follow a detailed plan and safe working technique.

NZCB apprentice challenge manager Nick Matthews says the show of carpentry on Saturday was a testament to the high calibre of apprentices currently in industry training.

“The future of New Zealand’s building industry is dependent on a robust pipeline of trade-qualified, and well-rounded carpentry professionals.

We encourage NZCB member builders to support this by taking on apprentices, as in doing so, they provide a pathway into the industry, and help to ensure there are highly-skilled builders coming through to meet the increasing demand for the sector,” says Nick.

“This sets apprentices up for a successful career in the building industry with a broad set of professional skills,” Nick says.

As well as winning the title of regional champion, Jared also won an ITM prize pack of trade tools and earned a place in the national final representing the Western Bay of Plenty.

There, he will compete against 18 other regional winners from across New Zealand for the Ken Read Memorial Trophy and $50,000 worth of prizes.

The national final will be held at the NZCB annual conference in Wellington on June 11-12.