Changeable weather continues into the weekend 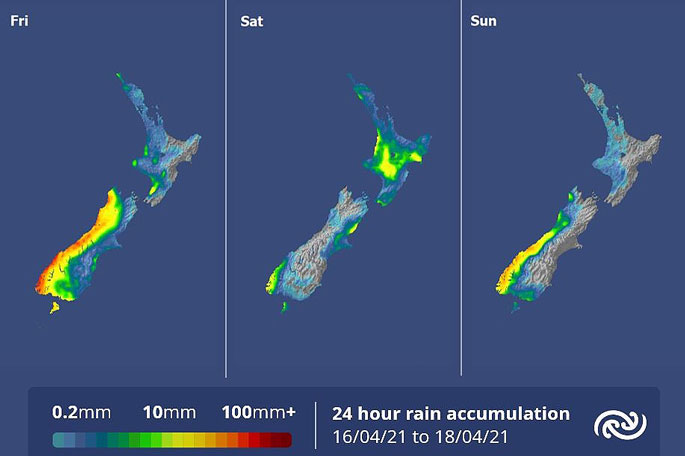 This week has seen much unsettled weather and MetService is forecasting this trend to continue, with cooler temperatures expected to kick-off the school holidays.

An active low-pressure system brought plenty of thunderstorms to the western and upper North Island yesterday, with 878 lightning strikes recorded over the North Island landmass from 10am to midnight.

"Though we are not expecting the next couple to days to be as active in terms of thunderstorms, the unsettled trend in weather is set to continue over the weekend," says MetService meteorologist April Clark.

"A number of fronts will bring rain, strong wind and even a bout of snow to the higher peaks through to Monday.

"Those just starting their school holidays will be relieved to hear in between these fast-moving features there will be plenty of fine weather."

Most of the wet weather associated with today’s front moving over the South Island (and the North Island tonight and Friday) is expected to remain confined to western regions.

However, a strong southerly change with a second front, which is forecast to move north from Friday, doesn’t spare the east from at least a short burst of rain.

These small accumulations are unlikely to help the very dry eastern regions.

This southerly change also puts a stop to the warmer than average temperatures many regions have seen this week with temperatures looking to fall by as much as 8C behind the front on Friday or Saturday, says Clark.

"But temperatures rebound again during the weekend in see-sawing fashion typical of Autumn.

"Though strong winds, showers, or rain continue to affect the South Island and lower North Island during the weekend a ridge of high pressure starts to build over the upper North Island with Sunday looking to be the pick of the weekend for those regions.

"Monday signals a break down in the ridge over the upper North Island, making room for a rain bearing low to sink south.

"How quickly the rain is expected to develop over the northern portion of the country is still uncertain so keep updated at metservice.com for the latest information."