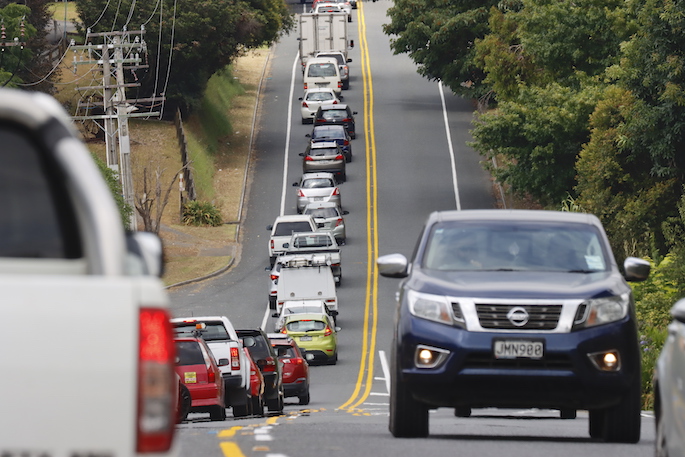 A half-a-billion-dollar pothole in road funding has been patched over but key projects remain in jeopardy.

This has come at a crucial time when the country's transport plans for the next three years are being drawn up, and as the Transport Agency tries to find new revenue sources amid a funding review.

"Our frustrations are at bursting point," he says.

"We just keep on getting kicked to the back of the queue. And this is regardless of which political party has been in play."

The rural town has fought for 30 years for a bypass to get big trucks off the main road that does dangerous double duty as the State Highway link to the Port of Tauranga.

"Like all things, that will go into the concrete mixer, and I wouldn't be at all surprised if it comes out the back end, 'Sorry, hear your frustrations. But there is no money'," Webber says.

"It's almost a charade. Every three years we have to go through this process of doing a hell of a lot of, you know, executive and councillor time working out what our priorities are.

These meetings are taking place throughout the country, as council regional transport committees work on regional land transport plans to add to NZTA's national plan.

But they are working under an even darker cloud than usual.

The Transport Agency, its revenues hit by Covid, has warned there is "very limited funding" and "very little room".

Already 90 per cent of revenue until 2024 is committed to existing projects or just to keep the wheels turning.

Planning could be a road to nowhere; as Stuart Crosby, head of Local Government New Zealand, puts it: "We know, at this point in time, that many projects will not get over the line.

"Particularly in the State Highway area in the growth areas in particular," says Crosby. 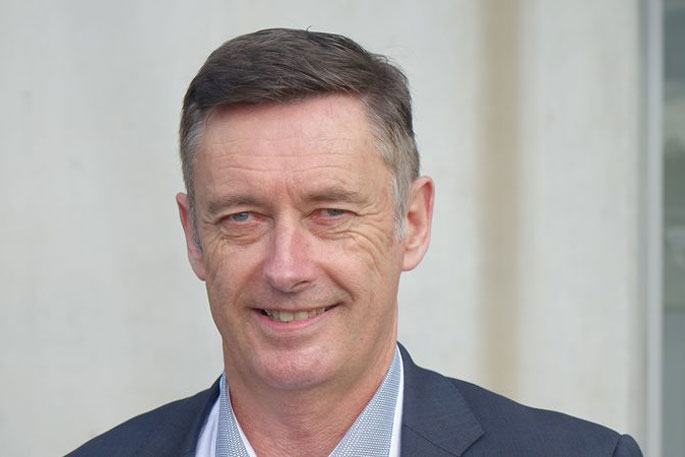 NZTA is expecting more will be spent on highway and local road maintenance, and on public transport services - as opposed to infrastructure.

However, that in part is just playing catch-up from recent underspending: By three per cent and seven per cent respectively on highway and local road maintenance in 2019-20, accompanied by a 30 per cent underspend on cycling and walking, with many projects suffering from Covid disruption among other things.

Things had looked worse still in February, when NZTA warned councils it faced "a very difficult situation", and would start the three-year period $250m in the red.

Local Government New Zealand responded to that with a policy note telling councils that maintenance and public transport faced an "acute funding crunch".

It says it has been raising the alert since mid-2020 about the pressures building on councils to meet their share of the three-year-plan costs (typically 50 percent on local roads).

The $500m hole now appears to have been plugged, from NZTA revenues rising to $13.5 billion from $13 billion.

"And the forecasts may continue to improve," an upbeat Transport Minister Michael Wood says. 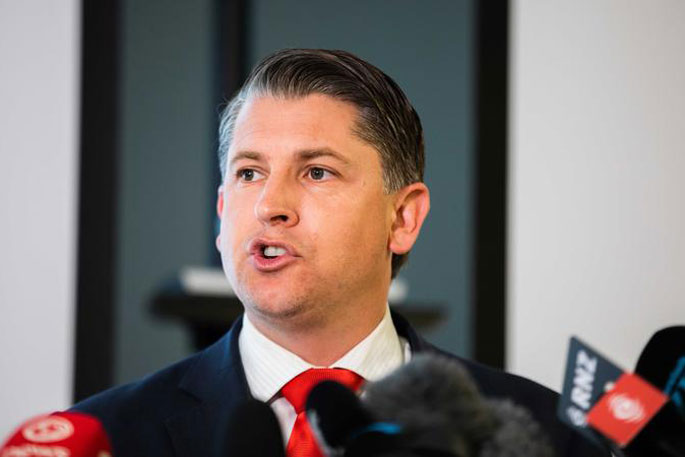 "Overall, transport investment today is at record levels. However, there are always more possible projects than it is possible to fund," he says.

The "record high" of $21 billion is bolstered by $7 billion of Covid rescue money focused on a few select transport projects, mostly in Auckland and Wellington, though including a new stretch of state highway south of Katikati.

The South Island councils are suffering from FOMO - fear of missing out - as they, mostly, are forced to compete for the regular fund away from the Covid billions.

"Certainly looking at North Island roads, they do look in a better state generally than ours," Tasman deputy mayor says. He chairs the South's overarching regional transport committee.

"This is more frustration coming to us from NZTA.

"Obviously, they're not getting the funding from government, or haven't been," Stuart Bryant said.

"No one really wants more of the same. Everyone's got projects that they've been waiting some time for now."

In the national transport programme for the last three years 2018-21, project targets were regularly missed, with, ironically, budgets regularly underspent, sometimes because a road-builder could not be found.

Nelson is caught in a stop-start dance trying to sort out its nightmare of tangled roads around the port.

"We're getting a bit tired of our issues always being the can that gets kicked down the road," Mayor Rachel Reese says.

"We have a very narrow State Highway route around our waterfront that carries the bulk of heavy transport to the port and from the port.

"It's a dangerous place to cycle and walk. It's an incredibly unpleasant place to do that."

They had done a decade of planning with NZTA but the agency has advised the project, including a Rocks Rd walking and cycling path, is running significantly behind time.

"We need to move to the next stage," Reese says.

"We've been saying to our public... 'Yes, we can get the plans, but there needs to be some money to deliver those plans'.

"My concern is that that waterfront project may get pushed out."

Reese is calling on the government to put more money for roads in the Budget next month.

"Our local road network is actually carrying much of the load of the state highway because it's so compromised.

"What we want is for Waka Kotahi to make a sound investment in their network."

Councils have until June to submit their plans, with NZTA telling them it was "critical" they sharpen their pencils.

However, at the same time, the agency told RNZ that, on average, signs were that councils were asking for a fifth more money than they got in the last three-year period, with some asking for up to 70 percent more.

Crosby says communication about the state of NZTA's finances had been patchy.

But the agency told RNZ it had been "advising for over a year that there are significant funding constraints for the 2021-24 National Land Transport Programme".

Waka Kotahi is aiming to increase total transport investment 15 per cent, including the $7 billion of Covid projects.

It has been looking for months for new sources of revenue, with help from the Transport Ministry and Treasury.

Crosby of LGNZ says the funding mechanism is fundamentally broken, for instance, relying on taxes on fossil fuels, when motorists are being told to go electric.

"We're still today hearing from mayors up and down the country, who are absolutely frustrated with the whole national transport funding system."

How priorities are set is a problem, as is just finding contractors, Crosby says.

Road funding is prone to political influence, too, he adds.

"It's a confusing system."

The national system would insist on rigourous criteria, then "suddenly a handout will arrive" with different thresholds.

"This has been going on for 20 years by various governments, and many of them are political [decisions] ... you have two sets of criteria operating at the same time.

"It needs to be sorted and sorted quickly."

However, the signals about the funding mechanism of NZTA are confused.

Waka Kotahi says it has almost completed a review ordered by the former Transport Minister Phil Twyford, who said in 2019 it must find a new model.

The agency in its statement to RNZ gave nothing away, such as whether motorists might see fees and charges rise.

But Minister Wood, his portfolio buffered by the government's unexpectedly healthy revenues despite Covid, says his advice is the current funding model "is largely fit for purpose until at least the end of this decade based on forecasts".

"Officials will continue to monitor revenue and expenditure levels and consider what, if any, system changes are required," he says.

Rachel Reese, though, says she has a message for the NZTA Board and Minister.

"Really, is this region of any interest or priority to the government?"

It’s a cynical laugh from me as cycleways and public transport budgets are underspent ! Hence the Cameron road ( would be debacle) 45 million dollar spend has priority over far more important traffic flow restrictions. Everyone can name several I’m sure . But no you will get a a green Cameron road , lovely space for walkers, cyclists , buses and even trees, though not for evil business and shopping vehicles etc

You put your finger right on it. It is about PRIORITIES and the Fairyland description of Cameron Road should not be on the list. It is being designed to accommodate the massive Buffalo Buses that the Council thinks are a "good Idea" and it is just one BAD idea after another. You are right that this money could be used for roads that REALLY need it.

Mr Webber,as a WBOP Katikati ratepayer all the hot air over 30 plus has got no were with regards to a Bypass for Katikati It will happen but it will be a tunnel under the Kaimai Rangers in the next decade I believe The Katikati shop owners want a Bypass a lot of ratepayers do not care please dont waste our money, Rates are bad enough now ,You also want to increase our Rates now for Rubbish Sorry you can keep your Plastic Bins

I feel a few blockades at the Uretara Stream bridge coming on.

Instead of spending money ruining the Greerton roundabout, and the stupid intention to change Cameron Rd, put the blimmin money where it needs to go. TURRET RD. Get on and 4 lane it. The longer you leave it, the more it will cost. As per all roading projects, costs escalate the longer you leave them. Fix what needs to be, and don’t bloody touch what’s working

Their revenue went down because of a few weeks of covid but then so did their spending as no one could work on the roads. Govt’s revenue was up. They have been forced to waste road money on replacing perfectly good street lights, building walkways and cycleways when that’s the councils job. But we have no money to build roads to ports for our exports. The Greens and the Govt and NZTA want booting out. Completely dishonest and inept.

Head in the sand approach

The ridiculous amount of funds poured lavishly into a hobby undertaken by a very small group of very vocal individuals, is coming home to roost. Just what is the cost per kilometre for bicycle infrastructure that is being used by one or two ideologically driven mobile hazards...? Try delivering goods to the stores on a pushbike. Try getting the groceries for a household on a pushbike.... It’s a dangerous hobby that more and more are undertaking in the comfort of their garages, linked together with a computer system and cycling around the world. That’s the only place that a cyclist is safe and the health and safety industry should be limiting their access to roads with high traffic volumes.

So why waste 45 million

So why waste money on bike lanes and bus lanes on Cameron road that will undoubtedly slow and choke Cameron road. Omokoroa road needs work, Cambridge road and State highway 29 intersection needs work it’s been diabolical for years. State highways through Tauranga need work to improve flows. Barnes corner, etc etc. . Yet we get our main Street to South Tauranga stuffed up. Just like Greerton

Well, maybe if the Government charged all people returning to NZ for their MIQ, the pot would be a little less empty!!