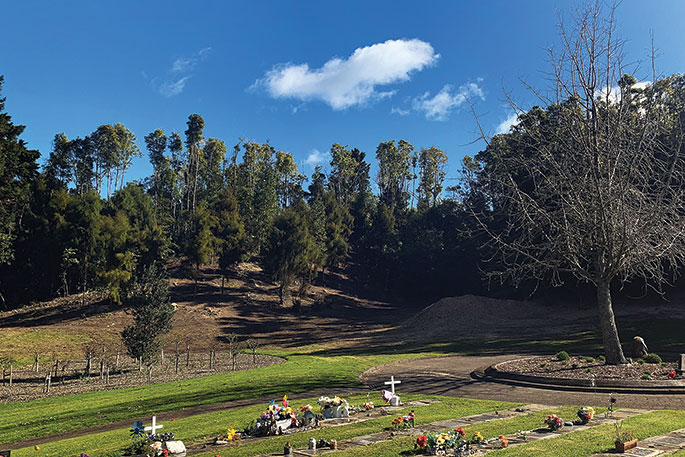 Six months after they were made legal, the first natural burial has been held in the Whakatane District.

“Those who have been involved in its establishment are grateful to have been a part of making this unique opportunity available for individuals and whanau,” she says.

“This includes the staff who assisted through the planning stages, and the parks and cemetery staff who prepared the grove with great care.”

The central principle of natural burials is to return the body to the earth for the benefit of the environment without the introduction of anything which would interfere with or pollute environmental processes.

“The grove is the result of a partnership between Whakatane District Council and the not-for-profit organisation, New Zealand Natural Burials,” says Fletcher.

“The grove will eventually become a living memorial to those buried there, a home for native flora and fauna, and a beautiful place for family and friends to visit.”

Whakatane councillors voted to allow natural burials in September last year after being asked to do so by the community.

When buried naturally, a body is placed in a shallow plot, in an environmentally friendly coffin made of soft, untreated wood or cardboard or a shroud.

Compost is placed with the body and a native tree planted on top.

Eventually the natural cemetery becomes native bush and a permanent living memorial to those buried there.

Willetts Funeral Services facilitated the service for the whanau.

While the loss of a loved one is always painful, Whakatane natural burial campaigner Jill Needham said it is great people can be buried in the way that they want.

“It is fantastic the first one has taken place, no one really wants to be number one, but now that one has happened, we may see more happening,” she says.

“That may set the precedent and we may have more people choosing that as an option.”

Whakatane council has set aside 50 to 100 natural burial plots on the hillside at the Hillcrest Cemetery.

It is an ideal spot as it is tranquil with established flora and fauna.

It costs $3035 to be buried naturally in the Whakatane District and people can choose between several species of native trees to be planted on their plot.