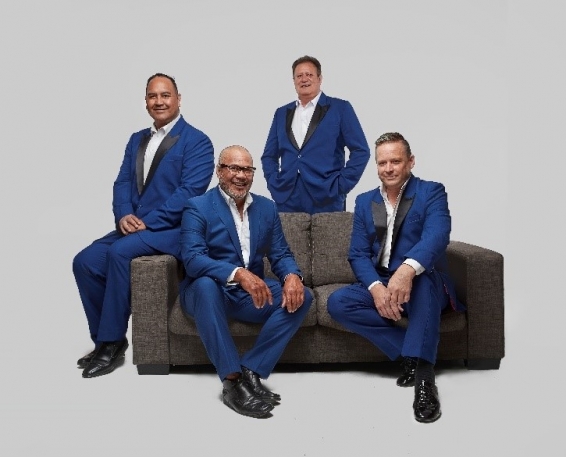 Fantastic reviews have seen ticket sales shoot up for the Rotorua performances of the Howard Morrison Quartet – Hoki Mai.

So much so that the quartet are adding an extra evening cabaret performance on Saturday April 24 2021.

Howard Morrison Junior is delighted with the reaction so far with the Rotorua shows signalling a homecoming and a heartfelt ‘thank you’ from the Morrison family.

“We are so humbled by the response to our forthcoming concerts. Lots of people missed out on our sold out Take Two tour, so we are looking forward to putting on great shows in Rotorua.”

“I feel it very appropriate that the final concerts be staged in Rotorua, not only because it is the birth place of the original Howard Morrison Quartet, but also the new show falls on the eve of ANZAC Day – hence the name for these shows,” says Howard Morrison Junior.

The shows will recreate the magic of the New Zealand phenomenon that was the original Howard Morrison Quartet, bringing the old quartet back to life with harmonies, humour and family stories.

Considered this country’s most successful show band, The Howard Morrison Quartet helped to establish the New Zealand entertainment industry. Combining family-friendly music with uniquely Kiwi humour, they toured constantly during the 50’s and 60’s, reformed regularly, and remained hugely popular. The charismatic lead singer, the iconic Sir Howard Morrison, also enjoyed a stellar solo career over many decades, and won the love and respect of his country for the huge amount he gave back to the community.

Performances at the Energy Events Centre, Rotorua, will include a matinee on Friday April 23 2021 and now two evening cabaret shows on Friday April 23 and Saturday April 24 2021. Tickets are available from www.ticketmaster.co.nz or from the Ticketmaster Box Office now located at the Rotorua iSite in Fenton St.

Anyone who purchases tickets to any of the three Rotorua shows can enter the draw to win brunch with the Howard Morrison Quartet on Saturday April 24 2021. Enjoy a delicious meal at Terrace Kitchen overlooking Lake Rotorua. The group of six winners will join the hilarious quartet and be serenaded with some of their favourite songs in this beautiful location.

Once you have purchased your Hoki Mai tickets go to http://bit.ly/HokiMaiComp to enter. Complete one entry for every Ticketmaster order/confirmation number and each seat on that order number will give you more opportunities to win! Entries need to be received by midnight, Sunday April 18 2021, with the prize draw the next day.

This talented quartet will faithfully recreate a trip down memory lane for the followers of the original showband, as well as adding new songs and some magic of their own.