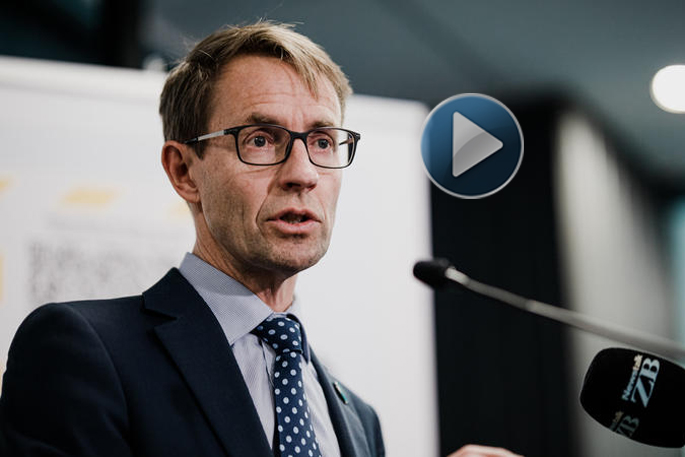 UPDATED 1.04PM: A border worker has tested positive for Covid-19.

Director-General of Health Dr Ashley Bloomfied says they were notified of the positve case overnight.

"The case is a 24-year-old border worker, working at the Grand Millenium managed isolation faciliy.

"They reported a sore throat four days ago and have not been vaccinated."

The person returned high CT values which can mean it is either early on in their infection, nearing the end, or the case is historical.

An urgent repeat test is being carried out today to give health officials a better understanding of this person’s infection. Whole Genome Sequencing will be carried out.

Ashley says the worker lives alone and travels to work via a private car with a colleague.

The colleague is currently self-isolating and has been fully vaccinated.

Health authorities are investigating any possible contacts of the positive case.

Locations of interest will be released as soon as they are identified.

As previously reported, a cleaner at the Grand Millennium managed isolation facility tested positive for Covid-19 on March 22.

Whole Genome Sequencing results for that case indicated the person was infected with the B.1.1.7 variant, and was found to be a close match to a returnee who had been in the facility.

As a result of this earlier case and today’s case, an out-of-cycle Infection Prevention and Control audit of the Grand Millennium facility will be carried out, similar to that previously done at both the Pullman and the Grand Mercure facilities.

There are also four cases which have been classified as historical.

These cases were previously under investigation and have now been confirmed as historical, and therefore counted in today’s tally.

Historical cases are deemed not infectious.

The seven-day rolling average of new cases detected at the border is seven.

The total number of confirmed cases is 2199.

These cases were previously under investigation and have now been confirmed as historical, and therefore counted in today’s tally. Historical cases are deemed not infectious.

On Wednesday, 6646 tests were processed.

In the past seven days, 24,694 tests have been processed, with a seven-day rolling average up to yesterday of 3528 tests processed.

The total number of tests processed by laboratories to date is 1,927,613.

Up-to-date information on all testing locations nationwide is available on the Healthpoint website: https://www.healthpoint.co.nz/covid-19/.

The newest version of the NZ Covid Tracer app is now available for download from the Apple App Store and Google Play.

Version 4.1.0 includes a number of new features that make the app faster, easier to use and more useful. Information about the new features was provided in yesterday’s media release.

Director-General of Health Dr Ashley Bloomfield will be fronting media this afternoon to provide the latest update around Covid-19 in New Zealand.

He will be live from the Ministry of Health building from 1pm.

The live stream will be available above.

SunLive will also be providing updates throughout the afternoon for anyone who is not able to tune into the live stream.

What we know to date

On Wednesday, New Zealand had 81 active cases of Covid-19, all in managed isolation.

The Ministry of Health is reported an additional seven new positive Covid cases in MIQ since the last update on Tuesday.

The total number of confirmed cases is 2175.

Since January 1, there have been 43 historical cases, out of a total of 363 cases.

In addition to the numbers above, the Auckland February cluster was considered closed.

This is based on Tuesday being 28 days after the last identified case in the cluster was classified as recovered.

"The cluster was made up of 15 community cases.

"All the cases in the cluster were able to be linked epidemiologically and through Whole Genome Sequencing."

The source of the outbreak has not been determined.

Sadly, I agree with the Prof.

I will be pleasantly amazed if the opening of the bubble with Oz is successful. It is still too soon, in my opinion. Hope I’m wrong but I won’t be surprised if we are back in level 4 lockdown by August...

Boing boing boing. Why is this fulla not vaccinated? We have had the damn stuff in the country for over 2 months. Pathetic.

Can’t see the bubble lasting far past the end of April.