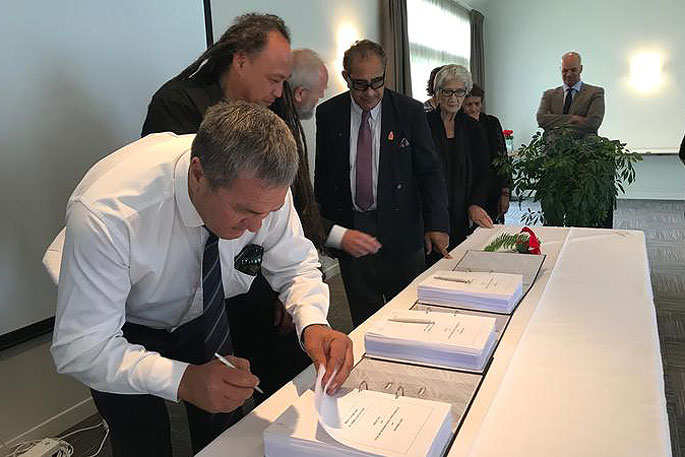 Ngāti Hinerangi, whose rohe includes the Matamata township, the Kaimai Range, and through to Tauranga Moana harbour, will receive more than $8.1 million in financial redress, after its settlement legislation passed its third and final reading in Parliament Tuesday.

The settlement provides Crown apology redress, including an agreed historical account, and Crown acknowledgements of its historical breaches of the Treaty of Waitangi.

As the settlement legislation passed into law, the 130 iwi members from across the country who had gathered in the public gallery of Parliament rose to sing a waiata and do a haka.

Lead negotiator Dianna Vaimoso was overcome with emotion saying it's a proud moment for the iwi which had found its identity through the settlement process.

"I can't believe that we're finally here and I know that as far as our identity as Ngāti Hinerangi, this has hit the top ... it can only get higher from here," Vaimoso says.

"We are tuturu Ngāti Hinerangi and everyone's seen it now." 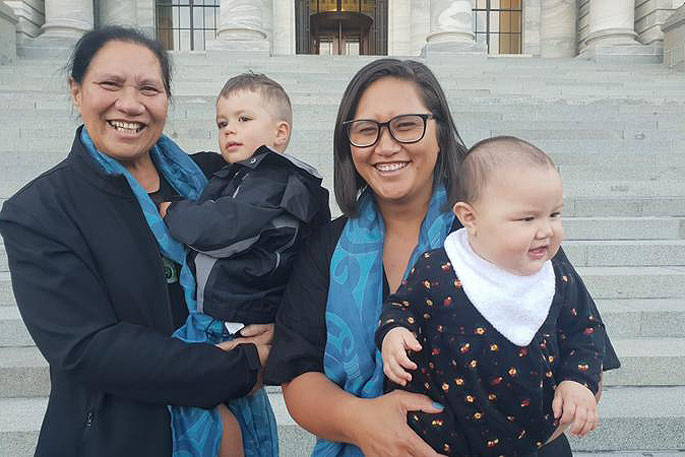 Vaimoso's uncle Matua Kore McMillan Koperu started the negotiation process back in 2004-2005 when he pushed for Ngāti Hinerangi to be recognised as an iwi in its own right, rather than a hapū of Ngāti Raukawa.

She says it took her a "while to hop on the waka", but she finally joined the Te Puāwaitanga o Ngāti Hinerangi Iwi Trust in 2008-2009.

Her uncle passed not long after, leaving her to carry on his legacy.

"That's certainly what I've tried to do everyday, is carry his legacy through, and of course if my uncle had not said that, one more generation and we would have been extinct, we were close to it.

"The reasoning for that is a lot of our women had married into Raukawa so it became Raukawa kawa (protocol) for us and we had forgotten who we actually were."

Surrounding iwi, including Ngāti Haua, Tauranga Moana, Raukawa and Hauraki, had supported them through the settlement process, despite the challenges of overlapping claims, but she felt that everyone had come through the process with their mana intact.

The iwi now had its sight firmly on encouraging its people to return home, with the iwi membership already growing from 220 to 1400 in the past five years.

Its labour hire crew, Wairere Mahi, employs 22 kaimahi who try to set iwi members up with full-time employment while connecting them with their marae and ahurea (culture).

Already, 27 iwi members have secured jobs, and Vaimoso hopes with their iwi settlement they will be able to grow that number.

It also runs Wairere Toi, a collective of haka, reo, art and history enthusiasts in the iwi who work in seven schools in the region to revitalise their culture.

Minister of Treaty Negotiations Andrew Little says it marks "a new beginning in realising the settlement promises made to Ngāti Hinerangi".

“I want to acknowledge ngā uri o Ngāti Hinerangi and the Crown negotiations teams for working tirelessly during the negotiations process. This is a significant milestone to see this legislation passed,” says Little.

“This marks a new beginning in realising the settlement promises made to Ngāti Hinerangi.

“When the Deed of Settlement was signed in May 2019 at Te Ohaki Marae, the Ngāti Hinerangi Chair Phil Smith likened it to a new Treaty between Ngāti Hinerangi and the Crown. In many ways that is true.

"Today we are reaffirming our relationship with hope and a vision for the future generations of Ngāti Hinerangi.

“This settlement signifies a new phase in the partnership between the Crown and Ngāti Hinerangi."

Copies of the Ngāti Hinerangi Deed of Settlement are available at: https://www.govt.nz/treaty-settlement-documents/ngati-Hinerangi/

The Ngāti Hinerangi Claims Settlement Bill can be found at: http://www.legislation.govt.nz/