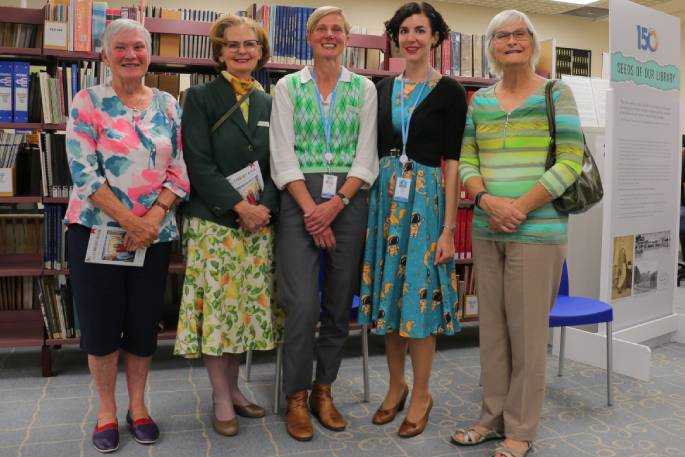 Tauranga Library is celebrating the 150th anniversary of libraries serving the community.

The event is a celebration of the progression made by the library system since, on April 7 1871, three men had a meeting at the Masonic Hotel about providing reading material to the local community.

That meeting sowed the seeds that would eventually become the Tauranga Library as we know it today.

Several former members of staff, such as former library managers Sue Pharo and Jill Best, were in attendance at the library on Willow Street to look at how libraries have changed in the 150 year history.

Seedlings growing into a vast forest of information for all members of the community is certainly the theme of the library’s celebration.

Abby Wharne, an archivist and heritage specialist with Tauranga City Council, delivered an informative love letter to the library system in the form of a presentation complete with photos from down the years.

What was initially known as the Tauranga Mechanic’s Institute soon blossomed into a service for the community and Abby has clearly been moved by some of the stories she unearthed over the 150 year history of libraries in Tauranga.

“I am passionate about the library,” says Penelope, who is dressed as a mechanic to celebrate the institutions origins. “28 years ago I came to Tauranga with my family and the first thing that we did was to come to the local library.”

Joanna Thomas, the current Tauranga Library manager, is also dressed up, in a flawless builder costume to signify the different edifices and structures which have incorporated the Tauranga library service for a century-and-a-half.

“I would like to say that I think librarians are some of the more influential workforces in New Zealand today,” she claims. “Why? Because they engender places of equity, of social connection. When you look at the world today you can see how important that is. Librarians help make that connection.

“In countries that invest in their libraries, they are in a different space.

“In the UK, Brexit was a bit of a muck up. In a decade, Great Britain closed 800 libraries. Do the math. No wonder people didn’t know how to vote, particularly if you are relying on social media.”

Hillary then explained how with looking back to the genesis of the library the future 150 years becomes clearer.

“As I understand it, 150 years ago a group of people led by three men, probably with three wives behind them asking for a library, decided to establish a library in Tauranga.

“150 years ago. That thinking was advanced at that time. Digital media is the future and our libraries have been at the forefront of digital inclusion. I am so proud to represent this organisation.”

To view the presentation ‘Seeds of our Library: 150 Years of Engaging with the Community’ visit facebook.com/taurangacitylibraries.