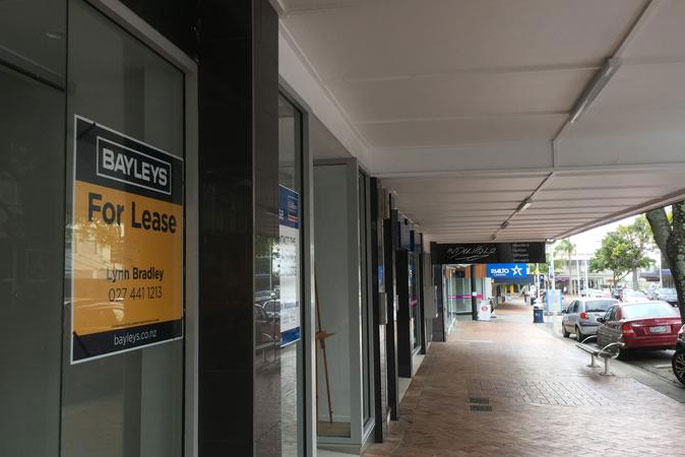 Tauranga businesses are hoping new leadership in the city will help revitalise the CBD, which has been hit hard by lockdowns and a lack of cruise ships.

Over the last five years, many have shut up shop or relocated as shoppers avoided the CBD in favour of heading to nearby malls.

A now-revoked begging ban was one of the more controversial moves made to make the city centre more welcoming to visitors.

When RNZ visited the CBD around lunch time on a week day last week, there was modest hustle and bustle at cafes and shops.

But there were also a number of vacant premises decked out with multiple 'for lease' signs. Some signs directed shoppers to new stores at two of the malls in the area, Bayfair or Tauranga Crossing.

She says people came to the city centre to work, but not for a shopping trip because it's hard to find a park.

"If you just want to pop in for an hour or two, get something and catch up with whatever you need to do - it's very hard to do that." 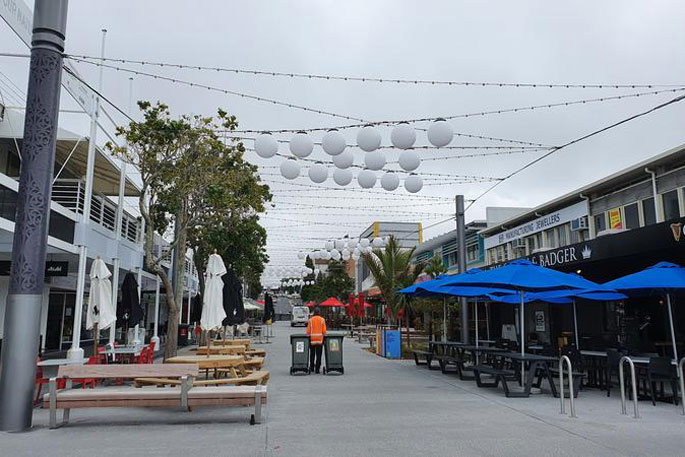 Wharf Street has been made into a pedestrian mall but was empty when our reporter visited. Photo: RNZ/ Jean Bell.

Meanwhile, Hammon Diamond Jeweller has been located in the central city for the past 35 years.

Owner Julie Hammon says the last few years have been a struggle, but her customers have been loyal.

Hammon believes business will improve as life returned to normal after Covid.

"It looks a lot worse than what it actually is at the moment. We've found that customers have been very supportive and loyal and keen to support the CBD," she says.

"We are enjoying good business as a result of that despite the appearances of the CBD, which of course is pretty ghastly."

She says there are a number of factors that have contributed to the city centre's decline, including banks and other essential services moving out of the CBD.

"There are many, many factors that have culminated in this perfect storm and we've got this eyesore of a CBD. But [it's] changing I hope."

Many in the city hoped that changing force would be the team of four commissioners who took over the failing city council earlier this year. 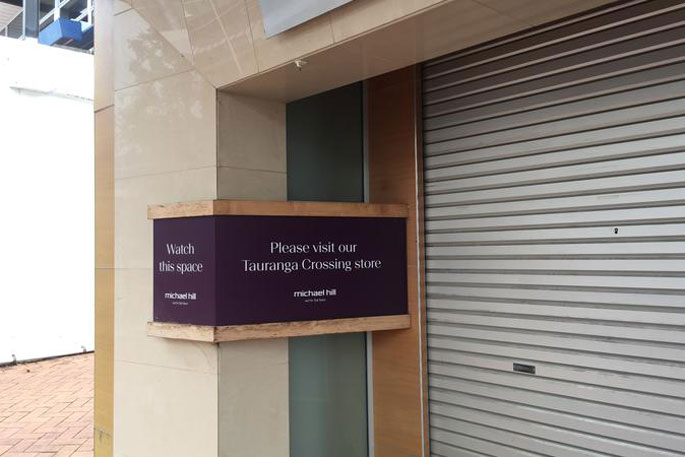 Some businesses have shut their CBD premises and are directing customers to their other shops Photo: RNZ/ Jean Bell.

Commission chairwoman Anne Tolley told business leaders at a hui last week she's astonished at the state of the CBD.

"I took a walk up the road and I've never seen anything quite like it for a city of 150,000 people. I understand there is a stack of plans of what to do with the CBD and the foreshore - a lot of hui, but not a lot of do-ey."

He believed more people would be out and about shopping as the vaccine was rolled out.

"But also businesses were prepared to commit to new leases. We've had a bit of an influx in the last few months of small office tenants who were coming into the CBD."

Berry says the Farmers development - a $130 million building that includes retail space and residential apartments - were among the projects underway and companies were encouraging staff to work in the office rather than from home.

The organisation was looking to liven up the city through its Activate Vacant Spaces programme which filled empty sites with pop-up art installations, social enterprise shops and laneway murals in partnership with the council.

Mainstreet Tauranga records showed about 75 per cent of the CBD's 699 spaces are occupied.

Downtown is the pits. Every time I go there another shop has bitten the dust. Goddards Arcade has only the cinema and the Thai restaurant left. Don’t blame Covid, it just kicked the corpse. The likes of the Jazz festival show that if you put on something, people love to spend time downtown. Where are the festivals, the markets, the concerts, the entertainment?

Well said. I’m exactly the same. Close central Devonport Road in as a mall, cover it and bring it on.

Too Dumb to think.

Car parking is a major. No places people just go away. That’s what malls etc win. Now we pulled down the council building and what did we do. Filled it up with containers etc and subsidized those fine people to be there. Why oh why didn’t someone in council turn it into a carpark. Christchurch did that with buildings they pulled down and council would have made money instead of ripping the taxpayers off once again. No one down their thinks these days. Just follow the clip board.

The demise of many CBD’s (Commercial Business District) can squarely be blamed on the ineffectiveness of the RMA. Many offices fled to the main arterial streets into houses. These are the life force of the CBD. Are these businesses paying commercial rates.? There should be a moratorium on ending leasing in these houses and returning them to residential to ease the rental shortage and offices return to the CBD.

Remove consent over say a 3 or 5 year period for accountants, lawyers and the many small businesses that operate in the residential streets surrounding business area, convert them back to residential housing. Make mainstreet run some exciting competitions as previously happened, it worked. Leave the streets alone, leave the pedestrian and bike path thinking to a flat and condensed city, not ours. The buses and depot are hardly supported because of the riff raff that annoy the people that do use them. I was a 30 year business owner there in nicer times, it has potential but has been let down by the council over recent years.

All thjat money $2million + for wharf st for crying out loud TCC said this would benefit the CITY yeah right only the (CON)TRACTORS MADE MONEY THERE,probably a buddy buddy thing, just saying and my thoughts only on this,it makes me sick all this stuff,and 2 weeks ago TCC going to spend $45million on doing up a swimming hole this should be spent on WATER AND dont get started on Cameron rd what a bleedin nightmare ,(ITS) PROBABLY ALREADY SIGNED OFF,golly gosh and TCC are giving themselves a pay rise with OUR RATES,SURELY we can up to these theives,us pensioners are already battling,but they dont care,anyway my 2 pennies worth,i noticed last time my thoughts were not printed,no free speech any more on how we the people feel, thankyou 10-4 out. phew.

What you have in Tauranga is a organization "Mainstreet" where the committee does not understand the process of the "Revival of Strip Shopping Centers" and therefore a lot of wasted money. Just look at Te Puke the same as Tauranga,empty shops

demise started years ago, and maybe the ’Mainstreet has failed’ comment needs closer scrutiny. I can’t be bothered going downtown, it’s too depressing. Would rather go to Tauriko, or Whakatane, both have great positivity. Personally, I think it’s long past revival time, too much damage done.

Return make a difference.?if not turn into inner city housing and invest into our waterfront with hospitality catering for dwellers and tourists alike

Recently, a friend and I decided to try out Downtown, and also The Crossing, to compare experiences. It is delightful to sit by the harbour and watch the kids in the water and the playgrounds. Good restaurants near the water, but awareness that parking is ticking... The waterfront should be the focus for CBD revitalization: it is a fantastic asset. The Crossing has no parking hassles and the range of shops and restaurants is superb. We spent several hours there and enjoyed all of it. BOTH these experiences were pleasant, even if they were different. Add to that the fantastic rural and ocean environment and why would you want to live anywhere else? Now all we need is a competent, responsible, transparent, management team, that we can trust, to take care of it.

Self help would be nice.

How many of those downtown businesses choose to be open over the weekend when most shoppers have the time to shop? There are some on Saturdays but very little on Sundays. Provide a service, just saying.

Make ’areas’ in carpark buildings and on Dive Crescent for those who work in the CBD and they must park there. They need to have a sticker which confirms that employment. They can park there free but must not park anywhere else in the CBD. This will free up CBD street car parks for shoppers/ clients etc. Secondly let every citizen who holds a driver licence choose a 2 hour time frame anytime between 8am and 8pm Mon-Sun. This 2 hour slot is free but stays the same every week. This will allow anyone to park free any week for that 2 hour time-frame of their choosing Again their can be a windscreen sticker showing their chosen time slot. Thanks.

The Council needs to stop funding businesses like Mainstreet and Priority One. All that does is provide jobs and hot air for the “boys, “ a platform for their own benefit. Now we have Elizabeth Street being dug up after over a year of Durham Street being a shambles and the bureaucrats said that would benefit the city. I have news for them, and I predicted it, all that has happened is it added to the demise of the CBD. How about all the road closures. Plenty of meetings going on and no action to do something beneficial.

It seems that everyone avoids putting the blame for the CBD ghost town in the correct place. Central Government and Tauranga City Council are to blame. Making seismic strengthening compulsory within a 10 year timeframe did it. Retailers wouldn’t renew their leases as they didn’t know how long they would be unable to trade and of course they had staff to pay. Landlords were unable to put the work off to a more convenient time. The result, empty shops. I don’t know how Council couldn’t see it coming. So now parking gets the blame, the public get the blame, anyone but themselves.

Mainstreet has failed, despite all the money

Despite being given millions of ratepayer dollars in recent years Mainstreet has ruled over the decline of the CBD. Whatever happened to the days when they did actual promotions that bought people to Downtown Tauranga? Downtown businesses whose rates go to Mainstreet or Downtown Tauranga should be asking for there money back. They could learn a lot from busy Greerton. No more Council money for the CBD. Let them compete with the malls and Greerton with there own money.

Maybe open a mobile stall in a park or at the side of a cycleway, because that’s apparently where all of our community is spending their time and where council is spewing rates money... Just a thought.