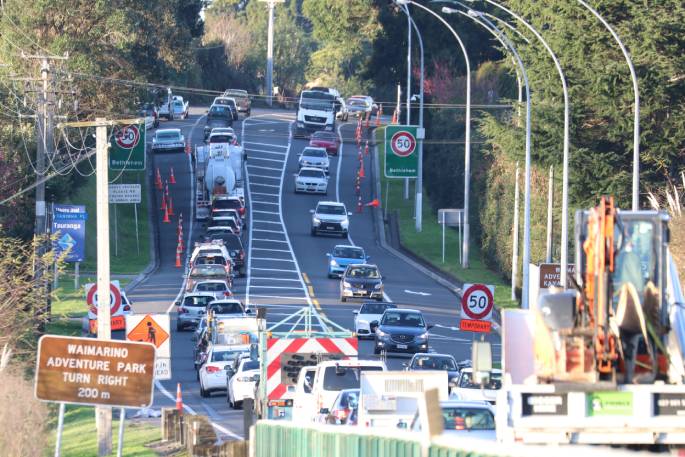 Traffic was a major issue for Tauranga residents in the Quality of Life Survey. Photo. Daniel Hines.

Nearly every Tauranga resident believes that traffic is a problem in the city.

That is according to the results of the 2020 Quality of Life Survey.

It measures the perceptions of almost 7000 New Zealanders on topics such as overall quality of life, housing, transport, crime and the community.

Conducted every two years, the 2020 survey also took into account the impact of Covid-19.

Traffic was by far one of the biggest concerns for Tauranga residents.

The survey asked residents whether they felt an issue was either a big problem, a bit of a problem, not a problem or don’t know.

In Tauranga, 80 per cent of residents polled responded that traffic was a big problem, with 18 per cent stating it was a bit of a problem and just two per cent claiming it was not a problem.

It equates to an overall total of 98 per cent of people in Tauranga feeling that traffic is a problem, easily the most significant result across New Zealand with Wellington second on 86 per cent.

The figure of 80 per cent suggesting traffic is a big problem was well clear of Wellington in the same bracket, with just 42 per cent believing it to be a big problem.

In the 2018 survey, 82 percent of residents in Tauranga indicated that traffic congestion was a reason why the area had become a worse place to live.

Other significant results from the survey included 80 per cent of residents suggesting limited parking in the city centre/local area was a problem.

Homelessness is also a major concern for Tauranga residents, with 81 per cent believing it to be a problem, the highest rate in the country.

It also represents a significant rise from 2018, when only 20 per cent considered it an issue that has made the area a worse place to live.

Dangerous driving is also considered an issue as well as alcohol and drug use. Tauranga residents also have the least confidence in their council’s decision making, with 56 per cent disagreeing that the council make decisions in the best interests of their city.

Overall, 53 per cent of locals suggest that Tauranga has become a worse place to live over the last 12 months from the point of the survey in 2020.

Meanwhile, despite rising house prices, only 35 per cent of people feel housing costs are a problem in Tauranga with residents in Tauranga the most satisfied across the nation with the suitability and location of their homes.

Tauranga residents are also the least stressed across the nation and, overall, 87 per cent of residents say they have a good quality of life.

How can all this mis-information be based on such a small statistic? The percentages are extremely skewed. TCC should get some real and valid information. 5 million people in NZ, but only 7000 responded. Exactly how many from Tauranga? You need true statistics to base a survey on. Diana

Where is the plan?

In these comments we see some really sensible ideas & some nutty ones, but everyone is singing from the same song sheet! 90+ % of people in Tauranga are p***ed off with the traffic congestion & there is not 1 viable plan in play to fix it. (reducing lanes on Cameron Rd does not count) It is long past time that our overpaid officials at least came up with some solutions, no matter the cost or how "dreamy", then at least from there we can hope for a plan of action. You can multiply all the people & all the money and all the good intentions in the world together but as soon as you multiply that by 0, then you will get exactly 0 every day of the week. Welcome to Tauranga... Fastest growing city x Great beaches x brilliant weather x 0 growth plan = 0

Millions spent on the Wairoa bridge bike attachment. Ive seen maybe 3 cyclists use it in last 6 months while hundreds of workers sit in traffic. Tauranga central city is dead and an embarrassment. Reduce the rent to try to make Tauranga a nice vibrant place to visit and shop. Isn’t some rent better than none. Probably too late now. What business owner would open a shop in a dead city. Free parking to attract not deter.

Give us the bus numbers

Why isn’t the Cambridge road and Highway 29 intersection a priority is been bad for so long. Why has the road from Omokoroa not had priority ? yet NZTA $ 45 million government money is for bike lanes and bus lanes to impeded traffic on Cameron road. Seems the flow of traffic in and out and through Tauranga is less important.! ? Surely the dangerous roundabouts at The crossing and route K need remedial work , another entrance at the historic village would ease traffic on Cameron . Our council and commissioners should be telling government what we need not the governments green agenda but priorities on traffic flow and proper design so lacking. If Greerton is a model we are doomed. Stand up to government for sensible design not slowing traffic on Cameron road . Integrate other routes in upgrade Fraser street etc

Not here to cause an argument or to defend myself. The LAAAARGE majority of peoples comments here are in agreeance me. It’s on you to convince us. Which you are failing to do. Now 1) Council represents local ratepayers and have more responsibility to us than the govt. If that means they reject central govt law. Then that is what they should do. (Similar to Northland council fluoridation stance) not saying fluoride should or shouldn’t be in our water. Just that they have represented the peoples wishes. 2) Nic J’s career didn’t start a year ago. He is doing that he is told. Not what we need. 3) Busses have done very little so far, most traffic are cars, realistically they need to accommodate cars and council themselves call these a "trial". Soooo it is an experiment.

Why did they not vote for candidates that stood up for the issue, Hewletts road traffic phasing is a joke

How to solve traffic, Council style

go back to the future

NZTA and TCC should give the roads back to cars and trucks and raise the speed back to what it was 2-3 decades ago and the police concentrate on careless,phone and drug drivers.Workers are wasting time in traffic jams

Hey Tom, I’m interested in your thoughts on these three questions. 1 - since bus lanes and cycling investment are part of the national transport policy how would you suggest Tauranga avoid making this investments as they form part of current law? 2 - How is Nic J an old boy when he’s only been on the role for a year? 3 - Why do you call buses an experiment, when by every fact, public transport is the only way to make a meaningful difference to traffic (there isn’t enough money or land to simply keep building roads)?

We unfortunately live in a country with a culture of accepting incompetence around other peoples money. Central government, regional councils, city councils and boards of directors (Mainzeal being the perfect example) If financial remuneration were reliant on fiscal responsibility we would have a council being paid minimum wage. Instead we throw huge salaries around HOPING to attract quality candidates. In the case of the unelected management, that process has failed miserably. Councillors and MP’S only know what they’re told, with very few having the nouse to do anything imaginative or thoughtful of their own accord. Sit down, do as you’re told and watch the bank balance increase.... Say nothing controversial

Morepork for Mayor please!! Agree completely with all the comments on this, so far.

It would be very interesting exactly how many Tauranga residents were part of they 7,000. I think these results are just nonsense. Well done Tom Ranger, smaller mini buses is the obvious answer. I am so glad I am 75 and can walk everywhere. Disillusioned with the council. Diana

Only fools state the obvious.

And yet it appears that the obvious is NOT being taken up by our City management. So, it HAS to be stated (again): 1. Traffic management is NOT a success here and nothing is being done about it. 2. If 6% of people use the buses, then stop running them. Sell the fleet and replace them with smaller, more efficient, and less costly to run minibuses that can respond flexibly to variance in demand. (As buses report occupancy getting close to maximum, more buses can be released into the network.) 3. The biggest problem the current administration are facing is complete lack of public confidence. They need to restore it. That means implementing a culture of responsiveness, transparency and responsibility in City Hall, that extends from the most senior Management to the lowliest clerk. NO unnecessary projects until confidence is restored.

I nominate Tom Ranger, 2Up, Merlin,First Responder, Kancho and Lets get real to run Council :-) Way way more sense coming from these guys than from the Clowns I Council.

If they aren’t gonna do what we all generally know the city needs. We need to get rid of them . Just like the others. NO more bus lane experiments. Just more double lanes that are continuous. I can’t make it any more simple than that. Nic J has to go. He is one of the old boys club at TCC maintaining the old status quo ideology. Fire the lot of them in fact. Had enuf. Just wait...the rates increases will come through. They will destroy business just like in the CBD. Call it a glorious success (by central govt’s green standards) and then give themselves a big salary increase. We all know it’s coming. They think we dumb. My gawd. It’s not an environmental success to have cars piled up every bloody where going nowhere!

And yet here we all are stuck in traffic and paying all our trade staff to sit in traffic. The question now is when will it be fixed?

Tauranga residents have the least confidence in their councils decision making. Wow, no surprises there. These are the clowns that state the Greerton roundabout is working fine, even though traffic is often banked up to Gate PA. These are the clowns enforcing new rubbish bins, that spent $1000s on 15th Ave, but left bus stops in the traffic, that run a fleet of empty buses around town, that want to turn Cameron Rd into a pedestrian motorway, even though they killed the town. No, they don’t listen. About time this city stood up, and said "Tis is Enough" !!!

And we are about to see it get worse as traffic engineering is proven to be a failure in Tauranga. Greerton problems will be extended along Cameron road and affect traffic in Fraser street and contacting roads. Buses are not the answer for many people public transport isn’t working . Infrastructure is stressed water supply etc as the city hasn’t dealt with growth. Council failures has been obvious to all so confidence it will be better is low. Commissioners are still led by staff to rubber stamp projects and government money has strings attached to cater for impractical green theories about what people should be doing

I wonder which part of the survey will be focused on by the seat warmers in council offices...? Particularly those with Green interests rather than community interests at heart. How many Green awards festoon the managers offices...?