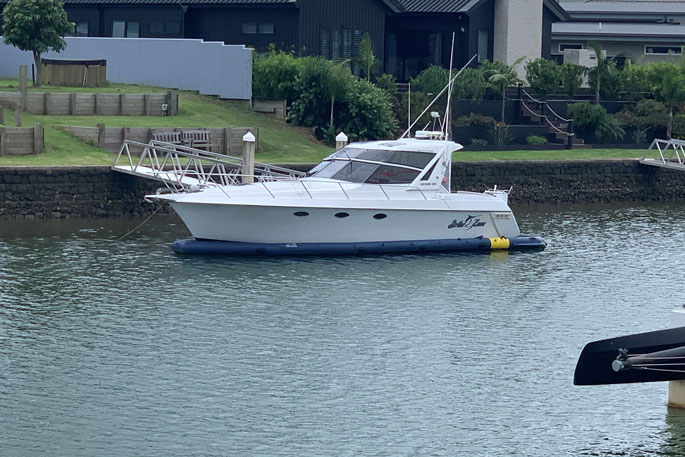 Owners of jet docks and other structures in Whitianga Waterways say it's illogical for their environmentally-friendly devices to be outlawed in existing stages of the canals, while they are permitted in the newly-consented areas.

A group of Whitianga Waterways residents is questioning the logic of an order to remove 34 docks and devices that are deemed to be non-complying structures.

The structures include floating docks and sea pens, used to bring smaller boats out of the water, but are not included in resource consents for the early stages of the waterways development.

A group of 20 canal residents say it makes more sense to have the consent amended, rather than force the removal of about $900,000 worth of equipment which is beneficial to the environment.

Some of the structures that must be removed are similar to those allowed in the consents for the more recent parts of the waterways development.

In a statement the group says anti-foul is the conventional marine growth control method. However, it is copper rich “and in enclosed marine areas can behave as a heavy metal toxin to marine life”.

The group says some Waterways residents have installed alternatives to anti-foul hull protection, especially in light of the invasion of a tube worm pest in the waterways.

These alternatives isolate boat hulls from the water by floating the vessel above the surface on plastic bricks or by inflating a bib beneath the hull that is pumped out, so the hull is dry when not in use.

“Environmentally, these methods of marine pest management are considered superior to anti-fouling, says the group.

However the Waikato Regional Council has mandated that “all the devices for getting boats out of the water are not allowed.”

Whitianga Waterways project manager Peter Abrahamson says in order to change the current resource consent to allow the new structures, all residents would need to agree.

“Judging from feedback received during this process that would be highly unlikely.”

He says the Waikato Regional Council completed an audit in April last year and found an “assortment” of unconsented floating dock systems.

The council has recently ruled that additional structures do not comply with the 2006 resource consent conditions and must be removed before April 30, 2021.

Peter says the date was at the request of Whitianga Canals Management Ltd to give residents plenty of time to make other arrangements.

He says there are 249 privately owned canal front lots that have the ability to install private pontoons.

“Of these, 34 have unauthorised structures. Since notification 14 have been removed.”

She says the management of unwanted marine organisms is carried out by the council in collaboration with the Ministry for Primary Industries.

“Of course, vessel owners have an important part to play too, by ensuring their vessels are antifouled and cleaned using appropriate facilities.”

If Whitianga Waterways wishes to change its existing consent, an application would need to be lodged with the council, she says.

That process will assess any positive or adverse effects of the structures, including any biosecurity or marine pest effects, as well as any visual, amenity, or recreational effects.

In the residents’ statement they say many people were not aware they were not allowed to have these structures, and there had not been any regular audits by the council in the past.

“Legally we have not got a leg to stand on but ethically I think they [Whitianga Canals Management] have behaved poorly.

“It appears both the developer (Whitianga Waterways) and the WRC have made a misstep. When presented with a good environmental solution to protect the marine environment, just saying it is unconsented is not good enough.”

On its website, under the heading ‘Clean below? Good to go!’, the council is currently seeking submissions on a joint marine pest control strategy with Northland, Auckland and Bay of Plenty.