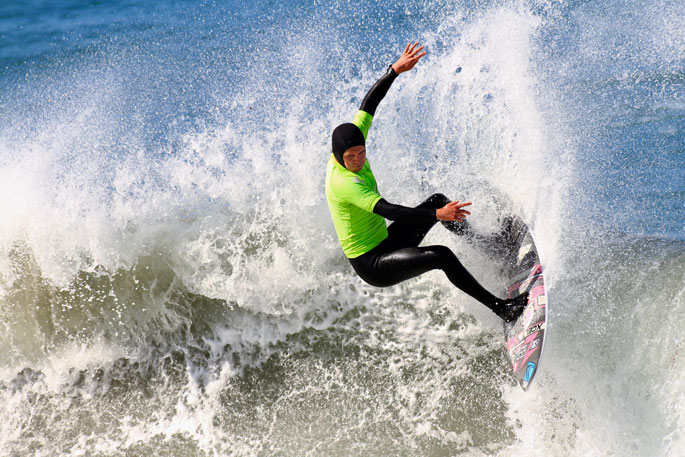 The 41-year-old joined Gisborne’s Saffi Vette who won her second event of the year in the Open Women’s Division after winning the National Championships at Piha in January.

The final day of the event was held in solid 1.5m waves with strong northwest winds making life challenging for many of the finalists.

Hancox claimed the win on his last wave ridden in the final, scoring in the excellent range, and over the required 6.78 for victory.

“It is surreal to win, I didn’t know if I had won or not until the prize giving.  I needed a 6.78 toward the end and I knew my last wave was there abouts but I didn’t want to get my hopes up,” says Hancox.

“Once we were at prizegiving, they called out Dan Farr in third then I heard them say ‘in second Max Marshall’ and I was like damn, I did it.”

Hancox first competed at a national event in 2001, making the semifinals in his first attempt.

He has competed ever since, only bettering that result at home in 2019 with a third-place finish at the Backdoor Pro.

“I set winning a national event as a goal in this January.  Instead of focussing on the goal, I focused on what I needed to do to get there, surfing heats as if I am free surfing etc. It is good to get a win before my surfing goes backward the older I get.” he says.

Hancox pipped Max Marshall (Chch) who, himself, was in line for a maiden victory.

Saffi Vette battled her way to a win in the Open Women’s Division.

Vette took out the final with an 11.4 point heat total.

“I was nervous going into this event, I’m not going to lie. Watching all the girls at Raglan was eye opening, it is cool to see how they are surfing.  I was just nervous, you never know what is going to happen in comps.  But I tried to stay focused and I am stoked to get another win, it gives me confidence going into the final two events of the season.”

Vette took the win over Taranaki surfer and double finalist Natasha Gouldsbury (Tara) who finished with a 9.83 point heat total to continue her good run of form over summer.

Titles in the senior divisions went to Sean Peggs (Tai), Reuben Woods (Mnt) and Richard Ayson (Dun) in the Over 30s, 40s and 50s.

The longboard finals went to Piha surfers Zen Wallis and Gabrielle Paul who will both retain their leads on the New Zealand Longboard Series.

Participants in the junior divisions had to battle some testing conditions throughout the weekend and made the most of the final day.

Natasha Gouldsbury (Tara) backed up her runner up finish in the Open Women’s Division with a win in the Under 18 Girls Division.

Ava Henderson (Chch) claimed the Under 16 Girls Division while the Groube sisters Chloe and Lola won the Under 14 and 12 Division respectively.

The three-day event is hosted by South Coast Boardriders and is dual sanctioned by Surfing New Zealand and the South Island Surfing Association.

The event features 17 divisions ranging from Open Men and Women through to Under 12 Boys and Girls, Longboard and Seniors.

The Emerson’s South Island Surfing Championships is the third of seven events on the 2021 New Zealand Surf Series for the men and fourth for the women.

See below for remaining events:

Please see below for results from the 2021 Emerson’s South Island Surfing Championships held at St Clair Beach, Dunedin from the 2-4 April 2021.