The agony of a hidden disease 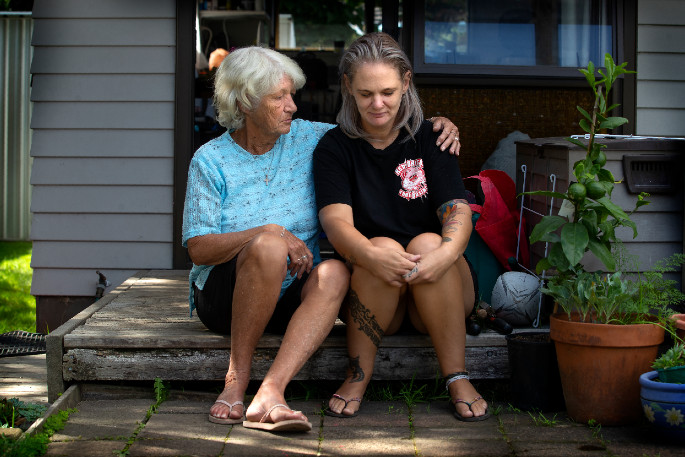 “There's been many times I've wanted to die.”

Andrea Martin is talking about the days when the pain from her endometriosis is so bad she can no longer bare it.

All her life she has suffered from the disorder, where tissue that normally lines the uterus grows outside of it. The tissue is commonly found on the ovaries, fallopian tubes, the intestines and the tissue lining the pelvis.

The Tauranga woman recalls the day she got her first period, at age 14, the pain was like nothing she’s ever felt before.

For five years she suffered, going to different doctors and trying different contraception pills, none of which seemed to help.

“The doctors just didn't believe me, they all said it was in my head and they still do now.”

This continual disbelief is frustrating for Andrea.

“You know your body, you know when there's something wrong with you.

“They make you feel like you're going mad and you’re just banging your head against a brick wall.”

At 19, a friend suggested she see their doctor. She was then referred to a gynaecologist and laparoscopic surgery was done to diagnose the condition.

She was put on a different contraception pill which helped somewhat but at age 35 Andrea was told she had to come off it because of the risk of blood clots.

One of many surgeries was performed to remove tissue and Andrea was fitted with a Mirena intra uterine device.

Since that day five years ago, Andrea has experienced constant pain. She tries to manage the pain with paracetamol and ibuprofen, if it is bad enough she’ll use codeine and other days it is so bad she needs GABA, a drug normally used for epilepsy, but it will cause her to sleep for three days.

“When I am in pain, I’m just crying constantly.

“The pain can come on whenever. I’ve just got to take one day at a time.”

After her fifth surgery last year she woke up without pain, it was the first time she actually felt better, but this feeling only lasted two hours.

The condition has ruled Andrea’s life; she missed school, has only been able to work for 15 hours a week and recently she lost her barbering job of 12 years.

Her boss said it was affecting her work and when she gets better things could change. This was also a blow because Andrea will always have endometriosis.

“I will never get better, I have to live with it. Even if I have a hysterectomy, the chances are it won't cure it because the scar tissue is everywhere in your body.”

The 40-year-old also suffers with depression and anxiety and trying to find a new job is incredibly daunting.

“I get quite anxious because I have to sit there and be like well, I can't work full time. I can only do 15 hours a week and who's going to want to employ someone that's sick all the time.”

Thin white scars are scattered across her left arm, evidence of the times she has self-harmed. An orange flower, a pink lily and barber’s comb tattoo cover most of the scars.

Those scars and the anguish in her eyes are the only outwardly reminder of Andrea’s continual pain and struggle.

Muay Thai and gym sessions five times a week are a release for Andrea, it helps with the pain and her depression and anxiety.

Her mum Diane says it has been heart breaking to watch her daughter go through it, from being bullied at school, disbelieved by doctors and dealing with the agony.

Andrea’s harrowing experience of endometriosis is just one story of the one in 10 women in New Zealand living with the disease.

Insight Endometriosis educator Annette Evans says on average it takes seven or eight years for a woman to be diagnosed with endometriosis.

This is because often women normalise symptoms and put up with it until it has affected their work, fertility or the pain is overwhelming, says Annette.

Also because symptoms are so varied for each sufferer, general practitioners don’t connect those as endometriosis, she says.

“Women of all ages need to seek help as soon as period pain begins to affect their lifestyle. Their GP can refer them to a gynaecologist specialising in endometriosis, or women can self-refer to a gynaecologist in private practice,” says Annette.

Insight Endometriosis is a charity that provides evidence-based information to help women and teenage girls make informed decisions about treatment options and lifestyle changes. They run support groups and events to raise awareness and reduce isolation.

Currently they have support groups in Tauranga, Hamilton and Auckland, as well as online.

Annette says the groups enable women to share and learn from each other’s experiences and get first hand advice about treatments or doctors that have been helpful.