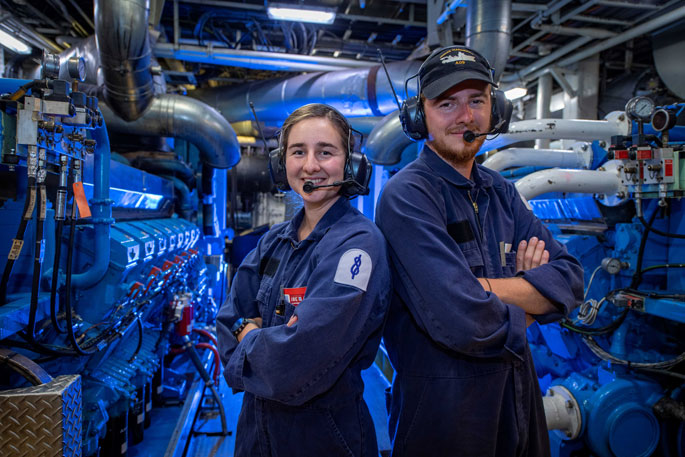 Anelies and Matt Duffy are carrying on a proud family tradition of service in the Royal New Zealand Navy and are both serving on board HMNZS Manawanui.

A Taupo brother and sister serving on board HMNZS Manawanui are the fourth generation in their family to embrace a career in the Royal New Zealand Navy.

Anelies and Matt Duffy are both Able Marine Technicians (Propulsion) posted to Manawanui. Their father was a marine engineer officer, their grandfather an engineer and their great-grandfather a gunnery officer.

Their mother was a Navy musician.

The pair went through Taupō-nui-a-Tia College and Anelies, the oldest at 25, joined the Navy in 2015.

“When I left high school, I had a gap year to work and think about university,” she says.

“But I couldn’t think of anything to go to university for. I didn’t have a lot of interest in engineering until I left school. Dad has got this massive shed and he had this old V8 engine which I started pulling apart. I found I quite enjoyed it.

“Then, six months through a diploma in marine engineering, I was offered a spot in the next Navy intake. I hated study and was keen to get into the practical side of things.”

Their parents certainly talked up the good aspects.

“They said, they’ll look after you, and that the job is rewarding. But they never pushed it. We’ve had so many generations do it, it seemed a natural fit,” Anelies says.

Anelies, who posted to Manawanui at the start of 2021 from HMNZS Otago, is starting her Leading Rates Development Course, the “final tick in the box” towards promotion to Leading Rate.

“You’re constantly working, constantly learning on the job. I’m still learning the systems in Manawanui. The other engineers look after you. It’s a cool ship and there’s a real sense of family.

“You make life-long friendships. And it’s a very rewarding job when you are at sea.”

He was in a similar situation to his sister. He knew he enjoyed engineering and took an engineering job for a year after school before enlisting.

“I thought, instead of training in engineering outside of the Navy, and paying for it, I could get qualified through the Navy.”

He first served in Inshore Patrol Vessel HMNZS Hawea, but said Manawanui was a great platform for training opportunities.

“I’ve learnt so much here. It’s a really rewarding job. When there’s a malfunction or an issue, you’ve got a process of fault-finding and rectifying. It’s really rewarding finding out what’s wrong and fixing it.”

Being in the Navy is about experiencing new things every day, he says.

“Even on a voyage to another port like Napier, you learn something new. It’s awesome being on a ship with a great group of people, because it creates a family.”

Matt went to Exercise Rim of the Pacific around Hawaii in Manawanui last year, earning his promotion to Able Rate and celebrating his 22nd birthday during the deployment.

He, along with the rest of the crew, had the unusual distinction of being a ‘golden shellback’ - a sailor who has celebrated “crossing the line” at both the Equator and the 180-degree meridian at the same time.

Anelies and Matt are close and while they might poke fun at one another, Anelies says it’s “pretty cool” being on the same ship.

“Mum and Dad are very proud and absolutely stoked.”