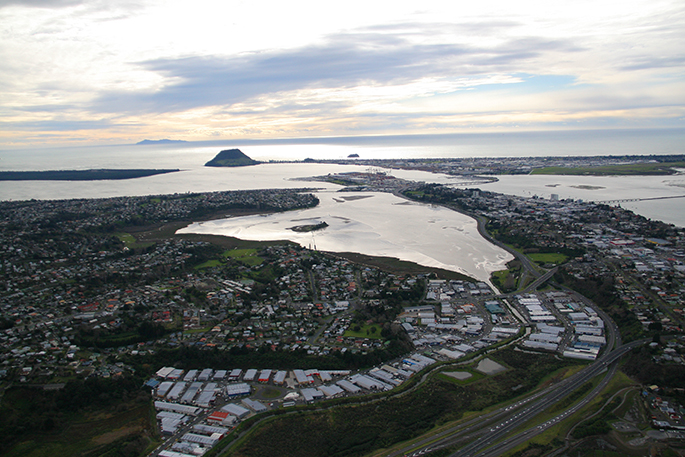 Tauranga’s house prices are still on the rise, with prices increasing 3.9 per cent in March alone.

Last month, market valuations company QV predicted a cooling off in the market.

However, QV says that announcement may have been somewhat premature.

The average house price rose 3.9 per cent in March alone, up from 0.7 per cent in February.

The majority of that price growth (17.2 per cent) occurred during the last six months.

QV says the Government’s new initiatives to quell the rocketing housing market were announced last week, just as house prices hit a new high for the end of March.

The average value increased 7.8 per cent nationally over the past three-month period, up from the 6.8 per cent quarterly growth we saw in February, with the national average value now sitting at $884,447.

This represents an increase of 18.2 per cent year-on-year.

All the major urban centres are showing strong gains in value, with the twin Hawke’s Bay cities of Napier and Hastings leading the way on 15.2 per cent and 10.6 per cent value growth respectively over the past three months.

Palmerston North prices also continue to rise at a rapid rate with quarterly growth of 10.3 per cent. 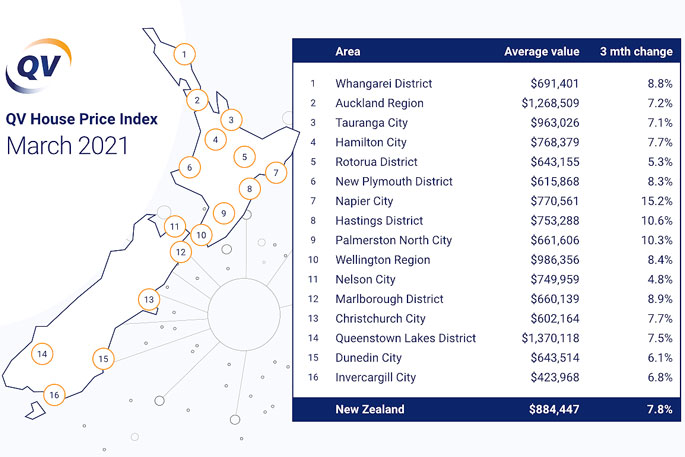 Time will tell whether the new measures announced by the Government last week will have an impact on rising house prices.

Buyers, sellers, politicians and commentators continue to debate the merits of the changes and the likely impacts on house values and rents.

“This is not going to be a quick fix, but certainly the changes will impact the buying and selling habits of some investors,” says QV general manager David Nagel.

“But any fall in activity from investors will likely be backfilled by increased demand from first-home buyers in the short term, so it’s hard to see prices coming down in a hurry.”

“It certainly sounds like it’s been a tough year so far for investors, with new Healthy Homes legislation impacting compliance costs for landlords in February, followed by the return of LVRs in early March. Last week's announcement to extend the bright-line test to 10 years, as well as phasing out interest deductibility will certainly make residential investment less attractive in the future. However the capital gains for seasoned investors have been quite exceptional for the past couple of years,” says Nagel.

“March 2021 is a really great time to take stock of all the predictions and opinions on how the market will react to the Government announcements. It is exactly 12 months since the country went into level four lockdown, and everyone, including ourselves, feared for a catastrophic drop in the property market. Twelve months on, we have seen record breaking growth in many locations, which has led to the government taking action to try to moderate this growth.

“This week, many commentators have given their opinion on how the market will react in the medium and long term, but the truth is – we don’t actually know. Any evidence of quiet open homes, empty auction rooms or values already on the turn is purely anecdotal at this point. The reality is that many investors will simply be taking stock of the new guidelines, digesting what it means for their property portfolio before making their next move or looking at alternative investments.”

Of the 16 major urban areas QV report on, all except Queenstown reached double digit annual growth. But even the Queenstown market, which was forecast to struggle after Covid-19 hit, has increased 9.7 per cent over the past 12 months, which corresponds to the time of our first lockdown.

The biggest mover was Palmerston North with annual value growth of 26.8 per cent, followed by Hastings and Marlborough with 25.9 per cent and 25 per cent respectively.

The Wellington region performed best of the main centres with annual growth of 24 per cent.

“Property has been a proven investment performer and one would expect a certain inevitability that residential rents will rise over time, to at least partially counter the changes, which is no doubt an unintended consequence of the government announcements,” he says.

“The extension of the bright-line test probably won’t have a huge impact on investor behaviour given the majority already have a buy-and-hold approach to property investment. But the removal of interest deductibility will impact many investor appetites to grow their portfolio and may also deter new investors from entering the market.”

The Professor wasnr very clever with that last post....From 1957 to the late 1980s the average New Zealand house price was between two-to-three times the average annual household income. So for those who are rich, retired or set up with 1 or more homes, it is not the same easy street for our young and you probably dont care except for yourself. I am worried our chn may never own a home now, it may be 20 times there income when they are ready to buy. The govt must do more to close the huge inequity between the rich and poor. Tauranga is out of control and people need to show love and compassion in these times and see for what this real situation is and support the govt. Do you really think house prices are fair, eg for the teacher on 90k in Tga 11 x income -

Thank you New Zealand. You have made me rich beyond my dreams.

Change the bloody record. Every single day we hear about the housing crisis, the price of houses, how much they have gone up by. Nothing much we can do about it this week. It going to take years to fix the problem....we need cheap flats built in cheap areas. And first home buyers need to drastically reduce their expectations....they need to climb the property ladder....not enter it halfway up. We don’t want values to drop....that’s not good for the people who have bought recently - negative equity is not a good position.