Nothing slowing down bike racers 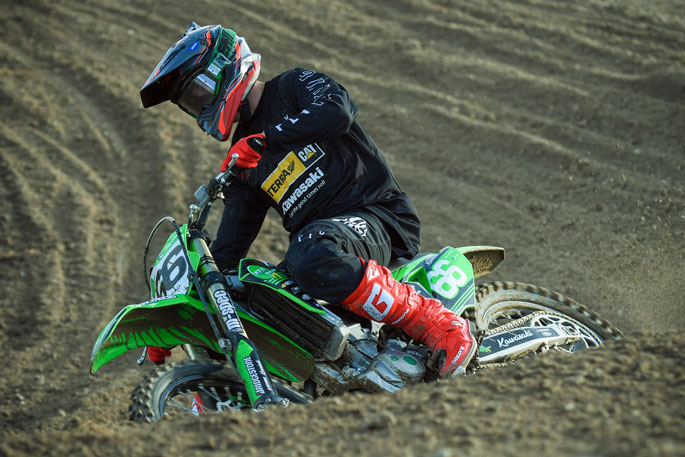 Hamilton's Seton Head (Kawasaki), likely to be among the leading riders at Taupiri this weekend. Photo by Andy McGechan, BikesportNZ.com

With only common sense to slow them down, riders will no doubt have their throttles twisted right round to the stops at the annual New Zealand Miniature TT Championships near Huntly this weekend.

Riders from all the various dirt bike codes – including a few road-racers too – will likely flock to the popular course at Taupiri, just north of Hamilton, this coming Saturday and Sunday for the TT nationals.

TT racing is like superbike racing on soil instead of tarmac – the racing is off-road and the competitors use dirt bikes or quad bikes, but, unlike motocross, there are no steep hills or skyward launch ramps to slow things down.

The Kawasaki-sponsored event typically attracts champions of the past and present – and possibly the future too – and it has always delivered the highest quality of dirt bike racing entertainment.

The host Patetonga Motorcycle Club is renowned for preparing the track perfectly and running proceedings like clockwork.

The event will again be staged on rolling farm property at 456 Rutherfurd Road, Taupiri, made available by land owner Mark Fuller, who is a former national enduro and cross-country frontrunner and the father of rising star on the road-race scene, the 2021 national 600cc Supersport class No.3 Zak Fuller, a ranking that he remarkably achieved on his debut in the class this year.

There is little doubt that this father and son duo will also be racing at the TT nationals this weekend.

"We are grateful that the Patetonga club has again stepped up to host the TT Champs and next year we are looking to run the event in the South Island," says Motorcycling New Zealand motocross commissioner Ray Broad.

"We are pleased that so many riders support this event. It's a great two days. There's normally camping at the track and bonfire at night, so it's more of a fun, family atmosphere. It's good to be able to offer a more natural terrain motocross meeting to MNZ members."

With racing for 10 separate championship classes over the two days, as well as support classes being run, the term "flat track" may be a little misleading, with the track expected to be rough and rutted by late Sunday afternoon, when rider fitness will play as much a part in the outcomes as any riders' bravery, skill or horsepower advantage.