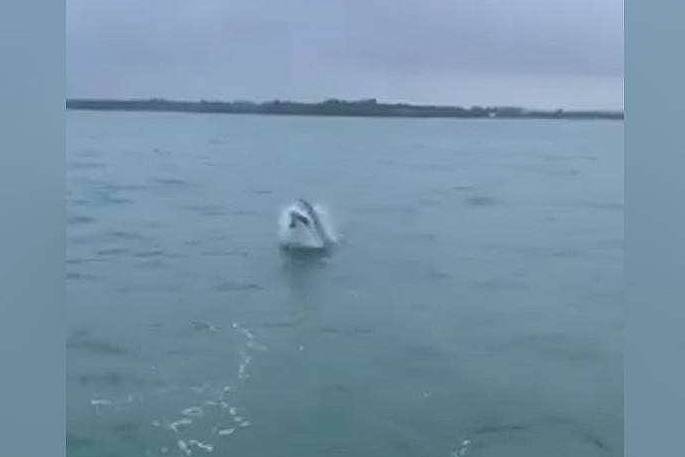 A screengrab from Josh Lonergan's video of a great white shark breaching near Bowentown. JOSH LONERGAN/SUPPLIED/Stuff.

A fisherman reeling in a feed for his 21st off the Bay of Plenty coast has captured something that’ll last much longer than a bin full of fish.

Josh Lonergan from Waihi was about to finish his daily quota in preparation for the coming-of-age celebration, when he noticed a shark eyeing up his dinner on Monday night.

The four-metre great white began chasing the fish three metres away from the boat near Anzac Bay at Bowentown.

“I was just gathering heaps of fish to smoke up and then vacuum pack for my party on April 16,” Lonergan told Stuff.

“At around 8pm I was reeling my last trevally and then I felt a powerful tug.

“At first I wasn’t sure if it was a bronze whaler or a white, so I quickly brought in my lines.”

Teasing the white with a kahawai head that he’d caught earlier, he managed to get the “huge beast” on video.

He says the harbour was “quiet and eerie” before the shark leapt up out of the water.

“I just held my phone recording just waiting and waiting.

“I’ve never had a great white jump above the boat like that. It was huge.

“I’ve caught a few sharks when I’ve gone game fishing - hammer heads and mako - but nothing like that.”

The area has been a hot spot for shark activity in recent months.

In early January, Hamilton 19-year-old Kaelah Marlow died in a shark attack at Bowentown. It is believed she was pulled from the water alive after the attack and paramedics administered CPR on the beach before she died.

Lonergan, who has been fishing in the harbour since he was a kid, says sightings of great white sharks have increased in the area.

“My old man was reeling in a snapper the other day, and it came right up to the boat, so they’re not shy. I’ve even had one circle my boat in the harbour. It’s pretty scary.”

“Normally this time of year it’s really hard to get your quota of snapper, but I’ve had no issues.

“I think that’s why so many great whites are around because the harbour is so healthy.

“I’ve never seen so many whites.”