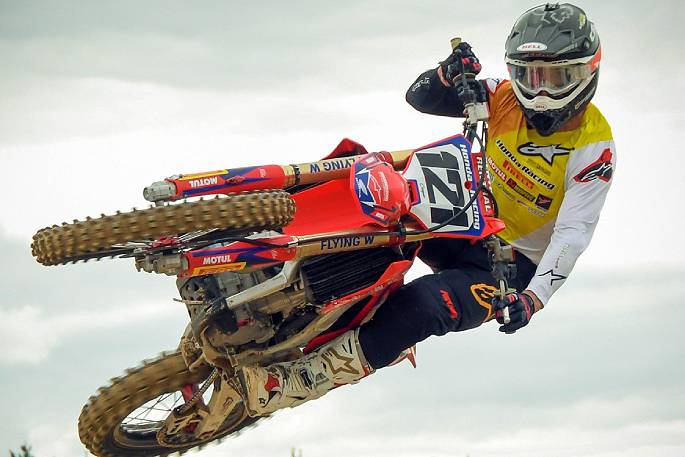 Mount Maunganui's Cody Cooper (Honda CRF450), on his way to an impressive hat-trick of MX1 class wins in Taupo on Sunday. Photo by Andy McGechan, BikesportNZ.com

Honda stalwart Cody Cooper was unstoppable at the fourth and final round of the 2021 New Zealand Motocross Championships in Taupo on Sunday.

With three wins from three starts in the premier MX1 class on Sunday, the seven-time former New Zealand MX1 champion showed that he still has what it takes and rubbished any suggestions that retirement might be beckoning for the man who will turn 38 later this year.

"I'm still loving the sport and, of course, I love winning races too," he exclaims, although it turned out, even with Sunday's dominance, he came up 10 points short of claiming national MX1 title number eight this year.

Perhaps it was a case of leaving his charge until too late, because four wins in total in an 11-race series isn't quite enough if your key rival wins six.

West Auckland's Hamish Harwood did just that and with that he celebrated winning his first national championship title in the premier class, leaving runner-up Cooper to rue a couple of missed opportunities earlier in the campaign.

"It was a great way to finish up the season," says Cooper. "We made a few changes to the suspension during the week and I was really happy with the bike today.

"I felt good all season, but I wasn't always getting the starts. Even if I don't always win, I'm still loving this sport. When you get older, it's all about the experience you're having at the track on the day, rather than being focussed on winning titles.

"I felt really fit today and certainly don't feel like I'm 37. I'll be back next year to do it all again."

Only three individuals won MX1 class races this season, Taupo's Wyatt Chase winning the other outing in the 11-race series and he claimed the third podium spot for 2021. 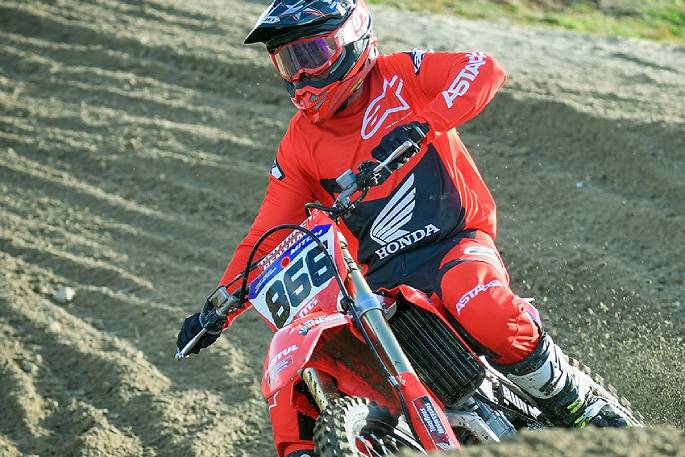 Riding a Honda CRF450, Rees decided he's better follow through on the challenge he'd issued to his 1000cc superbike rivals that they should front up and race the motocross nationals finale.

Only one of his superbike rivals did accept the challenge, Taupo's Scott Moir, although he opted instead to race in the non-championship MX3 class on Sunday.

With motocross obviously not Rees' main focus these days, Sunday's event at Taupo was the only round of the series that he entered and, despite lining up in the premier MX1 grade, he said it was "all just for a bit of fun".

Rees got better as the day wore on, eventually finishing 12th overall for the day at Taupo and, even with just Sunday's three races to his credit, he actually finished the four-round series ranked 21st overall out of 39 entrants.

"I was always going to come and race here. The results didn't really matter, but I qualified 19th, then twice finished 14th, before scoring a 10th in the last race. I'm pretty happy with that," says 28-year-old Rees.

"My goal was to get a top-10 result and I achieved that. My fitness was good, but I didn't have the raw speed. I was as fast in the last race as I was in the first race, so that was good too.

"Riding a motocross bike is good training for superbikes. There is that different kind of danger factor to consider, but any of these sports can be dangerous in their own way. It was good to come here today and hang out with the Honda boys. I had a blast."

Scott had finished third overall in the MX2 class last season, so this represented a solid improvement for the teenager.

Silverdale's Hayden Smith won the MX125 class crown, his second victory in that class after previously winning it in 2017, and Tauranga's Brodie Connolly was crowned Under-19 champion.