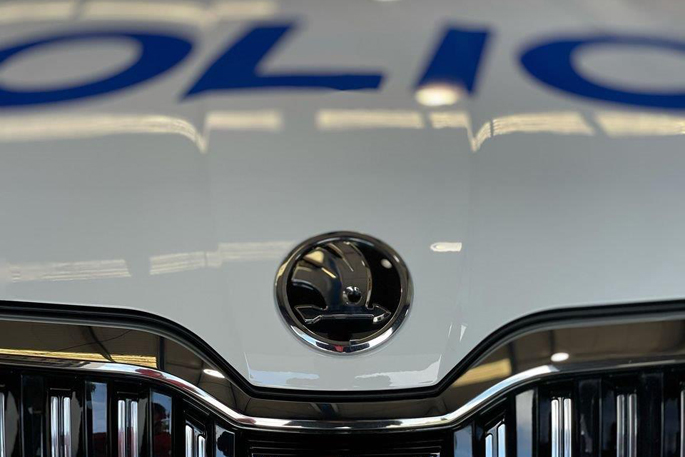 Skoda has been selected as the new fleet supplier for the police. Supplied image.

Police had to go to the market for a new fleet supplier after Holden announced it was pulling out of Australia and New Zealand.

Škoda was selected in November 2020 following a rigorous evaluation process.

The first Škoda Superb to be fitted out with police equipment and livery was unveiled by Commissioner Andrew Coster in central Wellington this morning.

“For frontline staff, their vehicles are their primary place of work.

“The Škoda Superb provides a safer, more comfortable environment for them while being value for money and reducing our carbon emissions across the fleet,” says Commissioner Coster.

Each vehicle submitted was tested against rigorous criteria by a team of staff from across policing groups and roles.

The first Škoda, unveiled today, includes several new prototype features, which will be field-tested during the vehicle’s initial months in operation including internal perspex barriers for officers’ safety and real-time location information on each vehicle to assist with deployment.

There are more than 2000 primary response vehicles currently in the police fleet, all of which will be replaced when they reach the end of their useful life.

The first 101 Škodas will be rolled out before the end of June with a further 386 scheduled to hit the road by the end of the year.

Vehicles will be initially deployed to training staff in districts and at the Royal New Zealand Police College.

The full roll out is expected to take four years.

Police will use two versions of the Superb as patrol vehicles, depending on operational requirements - the 162KW two-wheel drive and the 206KW four-wheel drive.

Both will be station wagons, which provide greater flexibility for deployment and were preferred by staff.

“We’re committed to reducing our carbon emissions even further and, as part of our ten-year plan to achieve an emissions-free fleet, we’ve begun discussions with Skoda around what opportunities there may be in the future,” says Commissioner Coster.

“While not currently a viable option for our fleet, hybrid technology continues to develop and open up further opportunities.”

You just made my day :-) I hadn’t thought of the humiliation of boy racers getting caught by a Skoda - absolutely BRILLIANT, LMAO.

It is hard for those of us who remember the first Skodas arriving here back in the 60s and 70s, to think of them as credible Police vehicles. But, the acquisition of the company by VW has led to modern innovations, and the current models are obviously good enough to impress our cops. There’s still going to be some humiliation for boy racers who get caught by a Skoda...

why dont they put bars on the front. then they can push fleeing drivers off the road

Who would ever have thought a Skoda would be a Police car chasing criminals and in pursuits. OH MY GOSH. Can’t leave this without an old Skoda joke - What do you call a Skoda with twin exhaust pipes . . . . . . A wheelbarrow :-) (Well not anymore)