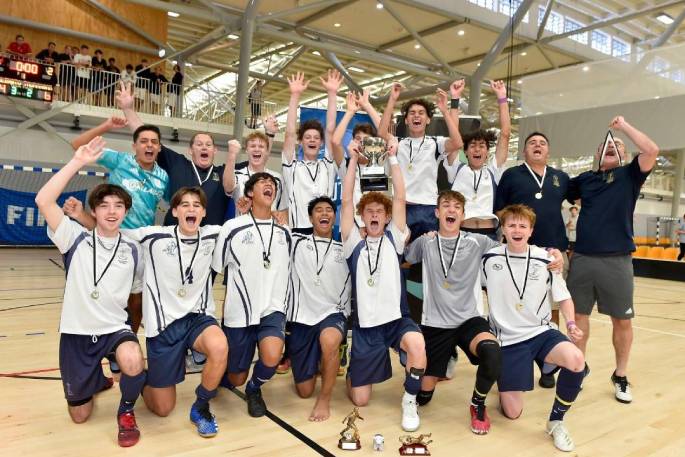 The senior boys’ team conquered top-ranked Wellington College in a thrilling final at the ASB Sports Centre on Friday.

TBC came into the tournament with high hopes, having won the Super 6 competition in Auckland and Regionals.

Wins over Rongotai College in the quarter-finals, Hamilton Boys’ in the semi-finals and then Wellington College in the final secured the trophy, with friends and family watching on from the sidelines and through Facebook, with New Zealand Football live streaming the tournament.

The excellent performances of the boys has been matched by the management of John Page and coaching of Mario Ramos and George Gall.

“We were pretty blessed to have both Mario and George on the coaching team,” says John. “We are just lucky to have that depth and skill.

“It was the perfect knit. Both him and George both have a very good idea of what they want to get out of the boys.”

Futsal is a relatively new sport in New Zealand but also one of the fastest growing. Vastly popular in Brazil, John describes it as “football in fast forward.”

Having Brazilian native Mario as part of the coaching team certainly gave the boys something of an edge.

With TBC trailing in normal time they utilised the fifth man, or goleiro-linha, which is when the goalkeeper essentially abandons his defence of the goal and joins the playing attack.

“With one minute to go everyone was shouting to have a shot,” Mario laughs. “But I said to my boys that if they play the fifth man we know how to do that so keep calm and keep on playing.

“There was someone behind me shouting ‘coach, they need to rush.’ I said ‘they know what to do’.

“We have been training for two months. We scored a goal with 30 seconds to go and turned around and said ‘I told you so’,” Mario laughs.

“I knew they would do everything right.” 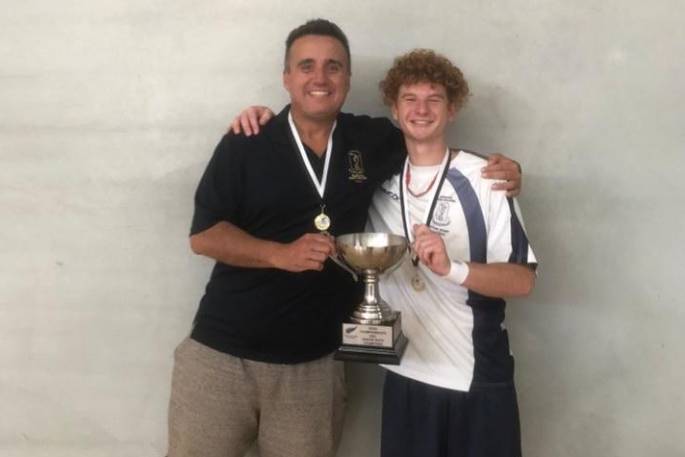 Whilst the coaches have been working hard to improve the development of futsal the main credit, as John and Mario both make clear, is with the boys.

“I can’t be more admirable of the good mandate that they were focused on,” says John. “They had a job to do. That is what the week was about there was no mucking around. They were just focused and on the ball.”

As Mario mentions, when they arrived in Wellington early last week, TBC were the only team to head out and train on the eve of the tournament.

“It all paid off,” he says. “All the hard work. On the court two times a week for four hours.

“When we arrived there on Tuesday I took the boys for training. We were the only team from the 44 that were training. Of course it was a light training but the boys needed to feel the energy.

“The other teams said the ‘boys need to relax’ then after we won all the other coaches said ‘next year we are going to train the day before as well.’”

John backs up his coach.

“We sat in the van for nine hours coming down so they needed a run around,” he jokes.

TBC goalkeeper Jackson Gilbert was awarded the ‘Golden Gloves’ award as best goalkeeper at the tournament whilst Vincent Phirun was given the highest individual accolade, winning ‘Tournament MVP.’

“Vinny was just outstanding,” says John. “But we are lucky we have great depth in the team. Any one of those boys could have stood up. They are a good bunch of young men.”

It is the first time a team from the Waikato/Bay of Plenty has won the senior competition and with Hamilton Boys’ College winning the 2021 juniors category the future is bright for this fast emerging sport in the WaiBop area.

“Hopefully we are just raising the flag of what futsal is and how cool it is,” says John. “It is seen as something of a side sport here but hopefully this will now make it a little more mainstream.”