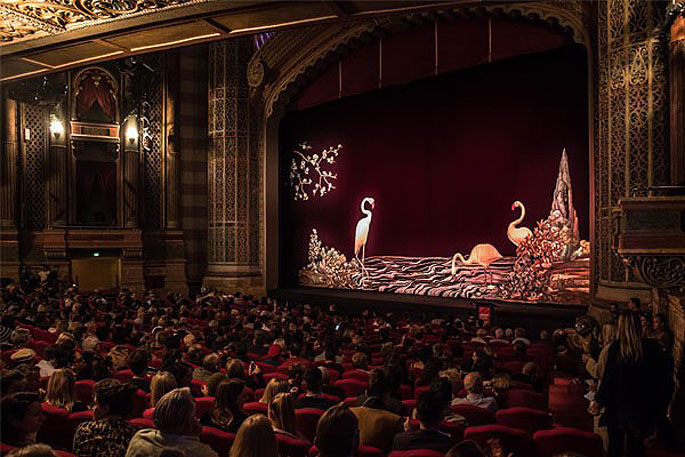 The 2021 film festival will see a return to The Civic with its iconic flamingo curtain. Pictured here is opening night from 2019. Photo: Veronica McLaughlin/Supplied.

The New Zealand International Film Festival has confirmed its dates for 2021 and the festival will now take place from late October this year.

The film festival normally opens in July/August. In light of the severe impact of Covid-19 on live events, the New Zealand Film Festival Trust and management have been carefully considering the national film festival’s shape and timing for 2021.

As anticipated, the 2021 festival will return to a fully cinema-based event to take place in 30 cinemas and venues in 13 towns and cities nationwide including the festival’s four flagship venues - The Civic in Auckland, The Embassy in Wellington, Isaac Theatre Royal in Christchurch, and Dunedin’s Regent Theatre. In Auckland, the film festival also returns to SkyCity Theatre.

Two critical factors are behind the decision to move to dates later in the year: the timing of the Covid-19 vaccination programme and supply of high-profile international films.

“The Government's rollout projections indicate that vaccinating all border and MIQ workers will soon be complete, and this critical step will effectively ringfence our ports and borders. By late October/early November, the Ministry of Health confirms vaccination against Covid-19 will have been made available to around 80 per cent of New Zealand’s adult population.

“This wide roll out ensures audiences can feel safe coming back into cinemas and also reduces the likelihood of the crippling lockdowns we've experienced in the past months.”

Additionally, the move also considers the recently announced postponement of the Cannes Film Festival from May to July.

“As a vital source of many high-profile festival titles, the later dates for NZIFF 2021 will allow us to select films from a delayed Cannes in addition to Venice and Toronto festivals which take place in late August/early September.

“By moving our dates, we can confidently expect to present the world-class film festival our audience expects and deserves. We can’t wait to be back in cinemas and venues around the country and satisfy what we know is a growing hunger for the very best of world cinema.”

The dates for 2021 will also see a condensing of the film festival across the country. “In the past, the festival has had a very extended run-time, opening in Auckland in July and running right through to October in some centres,” says Marten.

“Historically, this arose primarily to accommodate 35mm print traffic of films that often had only one travelling print imported by the festival to service all cities and regions. With digital projection, we can now present the same festival almost simultaneously nationwide to create a truly national film festival.”

NZFFT Chair Catherine Fitzgerald says the 2021 festival will include gala opening nights, Q&As with filmmakers and other live events.

“We know our loyal film festival fans will be thrilled to hear this news today, and we’re especially pleased that we will be back in full festival mode for 2021 to mark the festival’s 50th anniversary in Wellington.”

Catherine adds the decision to move the festival by three months for 2021 follows a string of postponements and delays of events in New Zealand and globally.

“Sydney Film Festival has also just announced a three-month delay, and many film festivals around the world have either been cancelled or forced online. We believe we are taking the best course of action having the good fortune in Aotearoa of a really viable window to present the film festival opening up in the spring.”

The film festival will open in Auckland on Thursday, October 28, followed by Christchurch on the following day, with Dunedin and Wellington to follow a week later.

The remaining nine centres span November and the first week of December.

Marten says this move to later dates is a one-off for 2021, and he anticipates the festival will return to its usual July/August timing in 2022.

Confirmed venues and dates for the 2021 film festival are: 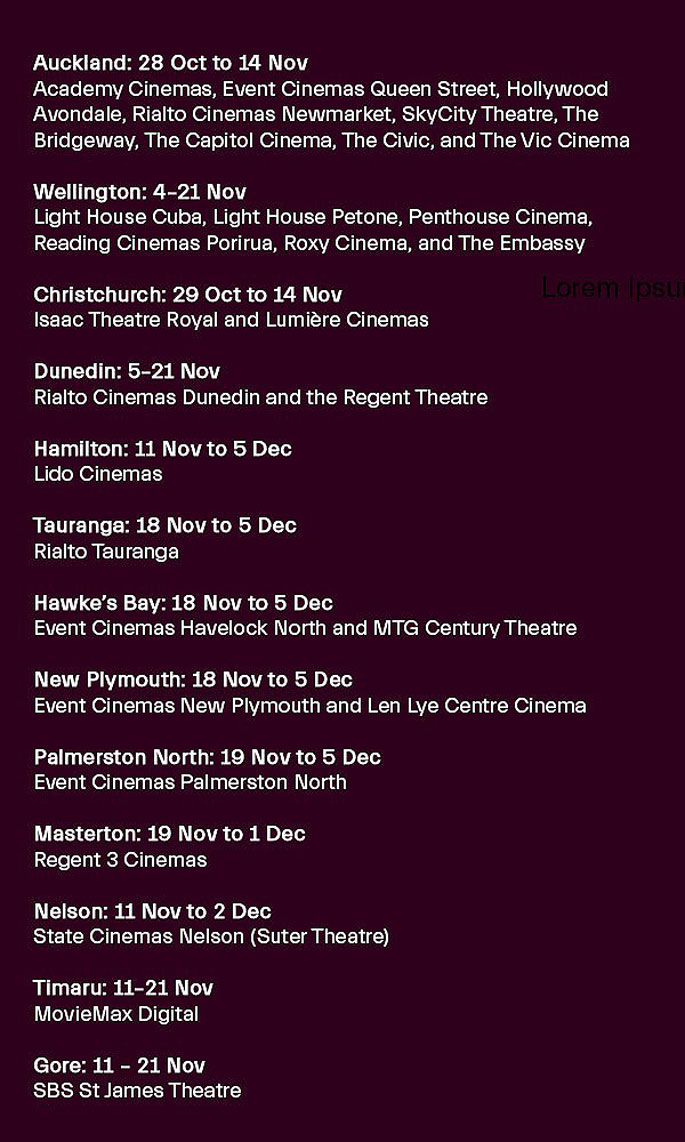