Motocross title glory to be decided at Taupo 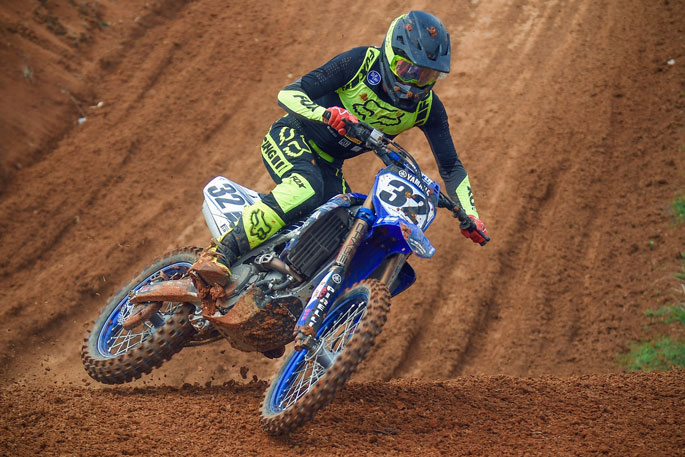 Taupo's Wyatt Chase (Yamaha YZ450F), hoping he can move up at least one more step on the MX1 class championship podium when he races on his favoured home turf on Sunday. Photo by Andy McGechan, BikesportNZ.com

The New Zealand Motocross Championships head to Taupo's popular Digger McEwen Motocross Park this Sunday, for the fourth and final round of the 2021 season and there's plenty still left to fight for.

Even if two of the main classes look to be fairly cut and dried, this sport is renowned for danger and drama in equal doses and nothing should be taken for granted.

Cooper is currently placed second in the MX1 standings and Chase is just another 10 points further back, with Hamilton-based former Mangakino rider Kayne Lamont and Te Puke's Tyler Steiner also with a good chance of moving up on Sunday.

The MX2 (250cc) class is there for the taking for Mangakino's Maximus Purvis and it could really only be a case of atrocious bad luck that will prevent him from collecting the silverware in this class for a second consecutive season.

Defending champion Purvis is a gigantic 40 points clear of his nearest challenger, Oparau's James Scott, and that means he has almost two races up his sleeve with just three races due to wrap up this class on Sunday.

Even if Purvis decides to play it safe, he should be mindful that Scott – the winner of two out of three MX2 races at the previous round in Pukekohe last weekend – Silverdale's Hayden Smith, Mount Maunganui's Josiah Natzke and Matamata's Brodie Connolly, to name just a few, certainly won't be backing off on their throttles just yet.

The MX125 class is another hotbed of young talent – double-class ironman Smith took over the championship lead in this class at round three last weekend, but Clevedon's Cobie Bourke and Tauranga's Madoc Dixon are well within strike range.

The racing has been extremely fierce in this class and the battle for the final podium spot is far from settled, with Hamilton's Dylan Westgate, Invercargill's Jack Symon and New Plymouth's Rian King lurking with intent.

The second of two rounds for the Women's Cup competition will also be run at Taupo on Sunday and Motueka’s Roma Edwards, Opunake’s Taylar Rampton and Hamilton’s Amie Roberts are likely to be the leading title contenders.

"We are all certainly looking forward with great anticipation to this weekend," says host Taupo Motorcycle Club president Bevan Weal.

"Taupo's Wyatt Chase and Mangakino's Maximus Purvis have certainly stepped up their game this year and, with plenty of noisy support from the local fans, they are sure to turn it up another notch on Sunday.

"We have a great bunch of club volunteers making sure this event runs smoothly. I'm just the guy who wears the tee-shirt with the word 'president' on it, but it's 20 or 30 other people behind the scenes who really do the hard work. They all know what's required and just get on and make it happen.

"Racing in Taupo this weekend is not to be missed."