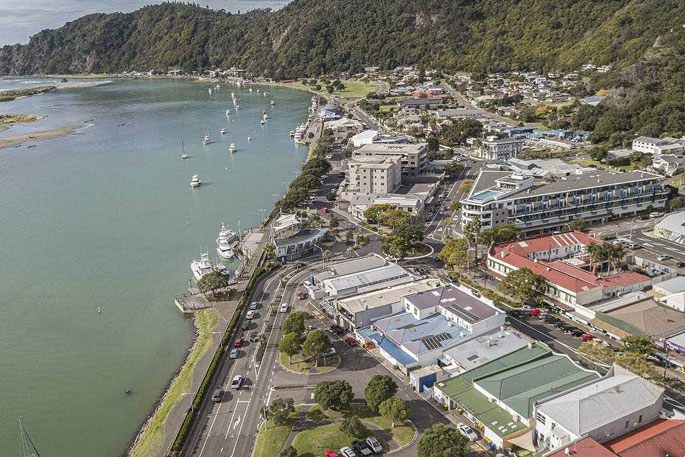 Whakatane township has been hit hard, losing tourism business after the Whakaari/White Island eruption in December 2019 and then with Covid-19. Now the local mill will close in June. Photo: CHRISTEL YARDLEY/STUFF/Waikato Times

A worker at one of Whakatane's biggest employers has warned at least half of the 200 people being made redundant will struggle to find work.

The Whakatane Mill confirmed this week it will close at the end of June, a huge blow for the Bay of Plenty town.

For more than 40 years, Rua Williams has worked at the Whakatane Mill, but soon he'll be clocking out for the last time.

The First Union delegate will retire now the mill is closing, but he's worried about how his other colleagues will fare.

"We've got middle-aged people, it's going to be difficult for them to find employment - young fullas, they should be able to make a go of it," says Williams.

While the fitters and electricians will easily find a new job, Williams says it will be difficult for those working on the production line.

But he hopes their strong work ethic will hold them in good stead.

All of the 210 staff at the mill, which makes paper and packaging products for export, will lose their jobs.

Over half of them are Māori.

Williams says many are trying to find jobs now, but are faced with a tough choice.

"People are racing around looking for jobs now but the company has put out a thing that if you're not here ... you don't get your redundancy, so it's a bit harsh on our workers because some of our young fullas, they've got to secure their futures."

Whakatāne Mayor Judy Taylor says the town has been left reeling, and the closure will affect more than just the mill workers.

"There's all the private contractors who rely hugely on the mill for their work programme, and their workers, and the implication there and we have no sense yet of how many other jobs are going to come into question now that it's a definite closure," says Taylor.

The mill decided to shut down after losing its biggest customer, Swiss packaging company SIG.

"My sincere hope is that there is a commercial party that will come to the table and see this as a prospect for the town, so that we can retain those jobs and retain that mill as an operational mill," she says.

If that doesn't happen, Allan's confident people will be able to find jobs on regional projects such as the new commercial boat harbour.

"Those types of those industries... heavily rely on skills that are transferable from industries like in the mill; welding fitting, engineering and the like," she says.

The Minister for Economic and Regional Development, and Forestry, Stuart Nash, says closing manufacturers such as the Whakatāne Mill is not sustainable for local economies.

He's working with companies and unions to reform the forestry industry.

“The importance of the closure of the Whakatāne Mill to our community and Aotearoa’s forestry industry cannot be underestimated,” says Labour’s Tamati Coffey.

“Everyone here knows someone that has or works at the mill. We need to come together in the face of this latest adversity set against Whakatāne, to ensure the continued resolve of our whānau to recover and survive.”

“After Whakaari, the Apanui School fire and the restrictions brought by Covid-19, we can’t leave any stone unturned. As we focus on immediate ‘whānau first’ support, we must also look to solution-focused opportunities for our future, that offer our rangatahi just as many pathways to rewarding careers at home without moving away."

Waiariki MP Rawiri Waititi wants to set up a "transit lounge" for kaimahi, where social services and upskilling is readily available to those leaving.

"These services will be requested and determined by them and that is what the Whānau Ora approach is, that this particular process must be driven by those kaimahi to support them and their whānau," he says.

Local iwi are also stepping up to help.

These include, Kainga, a new cultural hub and visitors centre, and Te Ara Mahi, a technical marine training school.

Funny how we read the same article and you say there are better jobs out there go back onto the job market? Yes it may have been inevitable the mill would close but with the tourism down turn I doubt there are two hundred plus jobs especially for middle aged people who have spent years on the production line. The way I read this article it’s very tough and people and are struggling a d will continue to struggle. I hope you are right that magical jobs will appear but I remember being middle aged ( and skilled) in a bigger job market and didn’t fare well for a long time. My sympathy and thoughts to those deeply affected by the closure

Glad that sanity prevailed. - If the business was running at a loss and was going to moving forward. There was no point for staff to be working there. No chance of decent progression. Slight to no chance of getting a decent wage packet. Right decision to let these people go back into the job market. Better jobs are out there for them.