Pickleball taking off in Tauranga 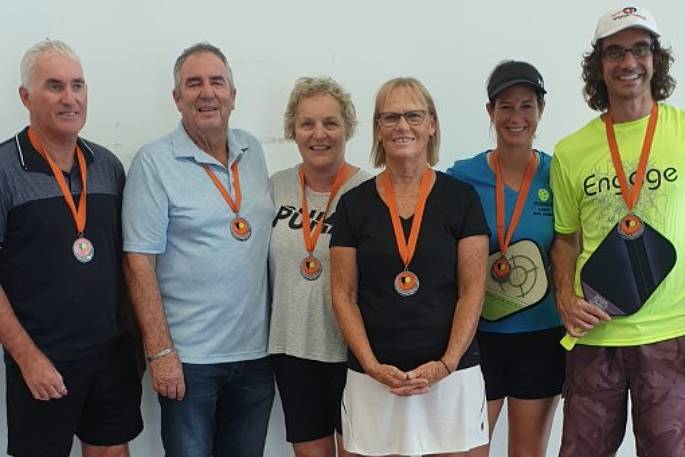 Mount Pickleball Club players have been the surprise package of their first outside tournament, bringing home five medals from Auckland.

The club’s only being going 18 months, but at the Te Pai Pickleball Open members made light of their inexperience.

Completing the medal haul was Paul Cubitt, one of only two recognised pickleball coaches in New Zealand.

Paul and his partner from Kerikeri were runners-up in the Open Mixed Division.

More than  60 players from around the North Island competed at the event, which was one of a growing number of pickleball competitions throughout the country.

Pickleball is now being played three times a week in Tauranga, at the Mount Sports Centre, Baypark and at the Queen Elizabeth Youth Centre.

Inaugural President of the Mount Pickleball Club, Bob Smith, says the sport has taken off.

“We started with just six players. A year and a half later we have nearly 70 people on our books – and it’s getting bigger all the time”, he says.

“We’re even starting to get enquiries from schools,  so look out for a whole new generation of pickleball addicts.”

Anyone wanting to try one of the country’s fastest growing sports can contact Bob at 0274786282, or just check out the Mount Pickleball Club’s Facebook page for details.

When I was at Primary school here locally in the 80’s it was called "Padda Tennis".

What in the world is pickleball?