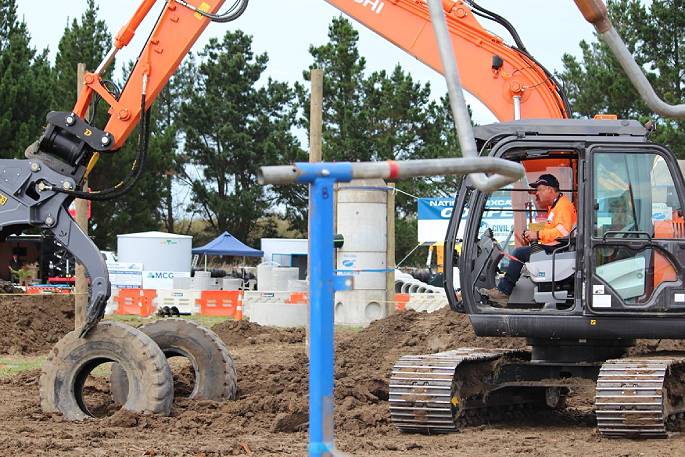 Bay of Plenty man Craig Crowley will take part in a heavy metal showdown in Feilding later this week.

He will climb into the cab of a 13-tonne digger to represent the Bay at the CCNZ CablePrice National Excavator Operator Competition.

Craig is one of 12 champions from around New Zealand who will test their excavator skills at a series of entertaining and highly challenging tasks.

These range from tests of ‘real-world’ skills such as traversing a trench or lifting and relocating a manhole cover, to crowd-pleasing tests of precision such as popping a champagne bottle using an excavator’s bucket, and slam dunking a basketball into a two-storey concrete pipe.

“The nationals would have to be the hardest two days of work you do in the whole year,” says Craig.

“The machine operating side is pretty easy, it’s the civil stuff I find a bit harder because we do a lot of farm work.”

The finals event will take place on March 19-20, during the Central Districts Field Days at Manfeild Park.

This year marks the 27th anniversary of the annual competition, which is organised by Civil Contractors New Zealand to raise awareness of the skill involved in excavator operation and the rewarding careers available in civil construction.

Craig qualified for the event after his success in the Bay of Plenty regional competition in June 2019.

He is a veteran owner-operator who has been behind the controls since he was 18.

Environmentally sensitive earthworks are his speciality and many Bay of Plenty orchards and vineyards have been prepared by his business Crowley Excavators.

He will now drive a Hitachi Zaxis-130 excavator in front of a crowd of hundreds as he battles for the title of New Zealand’s best multi-skilled excavator operator.

“Every year the competition gets bigger and better. It’s an ideal way to showcase the outstanding skill of New Zealand’s excavator operators and the capability of the impressive machines they operate. Whether you’re considering a career in the industry, or just looking for a fun day out with the family, this is the place to be.”