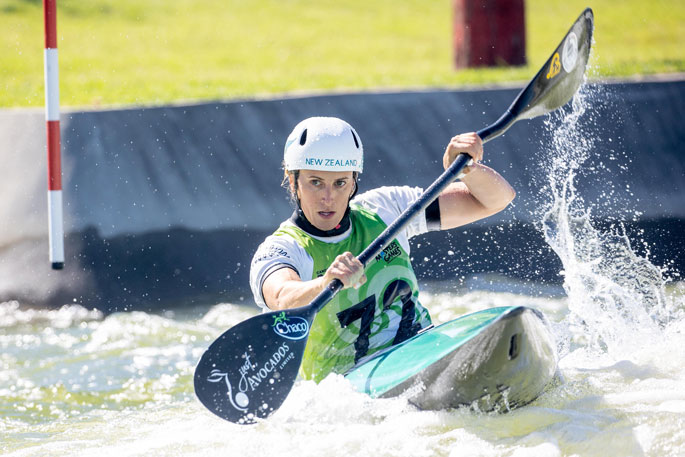 Olympian Luuka Jones on her way to victory at the Oceania canoe slalom championships in Auckland today. Photo by Jamie Troughton/Dscribe Media

The prospect of a fourth Olympic Games is helping Luuka Jones maintain a steely focus, despite spending the past 18 months in her own little canoe slalom bubble.

Jones capped an all-too-rare full weekend of racing in Auckland today, winning both the women's K1 and C1 titles at the Oceania championships.

Unable to travel overseas for much-needed competition, the 2016 Rio silver medalist relished the chance to test out all those months of training.

"We've been told the Olympics are going ahead, which is really motivating because all the rest of the international events are quite uncertain," says the 32-year-old Tauranga paddler.

"It's nice to have at least one big event on the cards and that's definitely what's driving me. It would be really nice to race against an international field again - when you haven't seen any of those competitors in two years, of course you're wondering what form they're in but ultimately it's just me against the clock and I love training and seeing how good I can get at this sport."

Jones still plans to head to Europe before the Olympics, after a three-week training block in Tokyo, but that will ultimately come down to advice from the New Zealand Government and High Performance Sport New Zealand. At least she knows the rest of her rivals aren't getting a jump on her.

"Everyone is in the same boat but for different reasons. Some people have restricted training, because Covid is such a problem in their country, and others can't get access to enough water so they can't race. Everyone has something that is limiting them, to a certain degree, but we are very lucky in New Zealand to be able to train here every day, in warm conditions, without Covid."

The men's racing was tight, with the other Olympic-bound Kiwi Callum Gilbert producing a surgeon-like performance, taking out the men's K1 with a 95.28sec run.

Of note was the minor placings, with 18-year-old George Snook (Rotorua) finishing second in 100.78secs and Tauranga 17-year-old Ben Pilbrow producing the performance of his young career with a clean 107.64sec run to grab bronze.

Gilbert's main rival, Otago's Finn Butcher, clocked the fastest raw run of the final with a blazing 92.04sec effort but picked up two 2sec penalty touches and was judged to have missed Gate 22, which dropped him back to eighth overall.

There was something of an upset in the men's C1 final, with another teenager, Finn Anderson, heading off Jack Egan by just 0.25secs.

Egan's run was easily the fastest but he picked up 10secs' worth of touches, while Anderson only had 4secs' worth.

"I'm pretty stoked with that - I recently moved to Auckland and I'm training most days on the course here and it's really paying off," says Anderson.