Batsman Taylor on a high 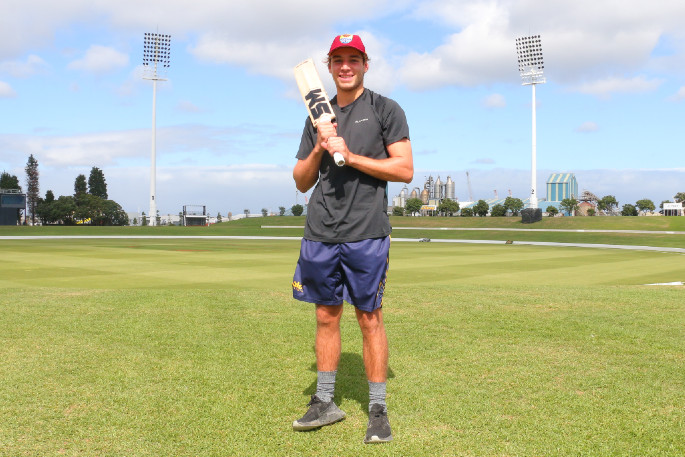 Since the Bay of Plenty’s first representative game in 1932, only three players have managed to earn double-ton bragging rights.

The most recent inductee into this illustrious club also happens to be the youngest. At just 19-years-old, Taylor Bettelheim is a name New Zealand cricket fans would do well to remember.

He crafted an impressive 211 not out against Waikato Valley at the end of last month, joining Alex Lees and Joe Carter as Bay of Plenty batsman to have smashed a double century.

The fact that it followed a century in his previous innings just further highlights this run-scoring opener’s talent, as he also claimed the February BOP Cricket Player of the Month Award.

Taylor is fairly modest when discussing the feat. The Tauranga Boys’ College alumnus, who also spent time at Saint Kentigern College in Auckland on a cricket scholarship, simply smiles when remembering his impressive recent knock.

But whilst humble, Taylor is also clearly ambitious when it comes to his future.

“I mean, hopefully, the dream is to play for the Blackcaps,” says Taylor.

“But first I am just trying to make the Northern Districts Knights side and go from there. That’s the long-term plan.”

Immediately, comparisons to Kane Williamson spring to mind when thinking of a free-scoring batsman from Tauranga.

Taylor admits that it would be “really cool” to one day play alongside the Blackcaps captain at the Bay Oval.

“Obviously Kane Williamson is the main one I model my game around.”

But his BOP coach Daniel Flynn, himself a former Blackcap, believes Taylor is forging his own path.

“He’s got his own way of going about things,” says Daniel. “He’s got a real solid technique, but it is also unique as well, which is good.

“He is not trying to imitate anyone. He just goes about his own business.”

Taylor and the Kiwi sporting star do share one trait in common, other than being prolific at the crease. Taylor is not afraid to work hard for his goal. He recently took the step of putting his higher education studies on hold to focus on his cricketing dream.

“It is pretty impressive to watch the way he goes about things,” admits Daniel, “and his form this season is a pretty good reflection of the hard work he has been putting into his game.

“It goes hand-in-hand. You can have all the skill in the world, but you have got to have the work ethic to back it up to make the most of it. He has certainly got that.”

The next step for Taylor is to establish himself in the Northern Districts set-up, and he hopes to be making his first-class debut soon.

“Hopefully, in the next couple of years, that would be ideal,” says the teenager. “Then I can start pushing for the Blackcaps.”

If Taylor keeps scoring runs at his current rate, it seems like a matter of when, not if, he earns international recognition.