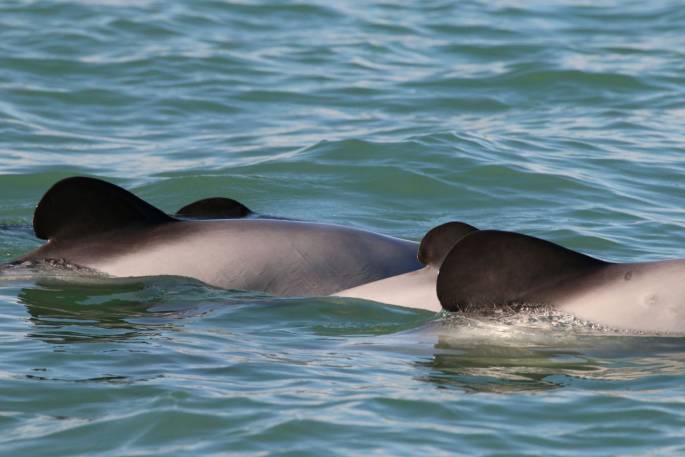 The Maui dolphins are one of the rarest breeds in the world. Photo. Department of Conservation and Auckland University.

The Department of Conservation is encouraging boaties enjoying the ocean off the Waikato’s west coast to report sightings of the Māui dolphin,

The call comes amid as a survey to determine the population of the rare mammals continues.

The Māui dolphins are among the world’s rarest, and their habitat is limited to the waters of the Tasman Sea off the west coast of the North Island. The area near shore between Auckland and Taranaki, particularly from the Manukau Harbour to Port Waikato, is where they are most frequently seen.

The WWF estimate there are roughly 63 Maui dolphins left in the wild, a figure which helped spark two young Tauranga fundraisers into action this month – which you can read about here.

The Māui dolphin abundance survey work comes during Seaweek, which urges New Zealanders to enjoy responsible recreation in the marine environment, be safe and aware on and near the sea, and to respect the ocean.

“The last population estimate was completed in 2016, and indicated there were only 63 individual dolphins over the age of a year,” says Ian Angus, the DOC’s manager of marine species.

“This is the third abundance estimate using this method, and from this we hope to get an indication of population trend for this taonga species.”

The abundance estimate work, is done over the course of two consecutive summers. The 2021 work is the second year of this survey.

The work is undertaken in late summer and early autumn, when the dolphins are known to be in the area, allowing direct comparison between years to estimate the population size.

The survey requires taking a little plug of skin and blubber from free swimming dolphins off the coast.

“The size of the sample is just 2mm in diameter and 5mm long, and from what we’ve observed over a long period of time the dolphins are not harmed,” Ian says.

“The dolphins usually continue to interact with the DOC boat, behaviour which wouldn’t be expected if this caused them distress.”

The DOC staff who carry out the survey will make 10 voyages, basing themselves and their vessel out of Raglan Harbour and Manukau Harbour.

“This year’s survey has not been without its challenges. Apart from the usual issues of weather, lockdowns from covid-19 have also caused disruptions. However we are still on track to complete these important surveys as planned.”

The samples obtained as part of the abundance estimate are analysed to identify individual dolphins through their unique DNA, whether females are pregnant, the age structure of the population, and calculate the total number of dolphins.

Staff involved in the survey have already seen several calves, which is an encouraging sign.

Ian says boaties and surfers can help with the understanding of the distribution of the species by reporting sightings.

“Māui and Hector’s dolphins have a unique shaped dorsal fin – somewhat like Mickey Mouse’s ear - that makes them distinguishable from all other dolphin species in New Zealand waters.”

The Hector’s Dolphin Sighting app is specially designed for the public to report sightings of both Hectors and Māui dolphins in real time. App users can upload photographs of the dolphins they see to help with identification.

If you see a dead Māui or Hector’s dolphin on the beach, urgency is crucial says Ian: “We can obtain a huge amount of vital information from a dead animal, potentially including cause of death and identifying diseases the dolphin may have had.”

DOC and the Ministry for Primary Industries recently completed a review of the Threat Management Plan for Hector’s and Māui dolphins. As part of that review, additional management measures were implemented in late 2020 to further protect Māui and Hector’s dolphins.