Day 1 of America’s Cup ends in a tie 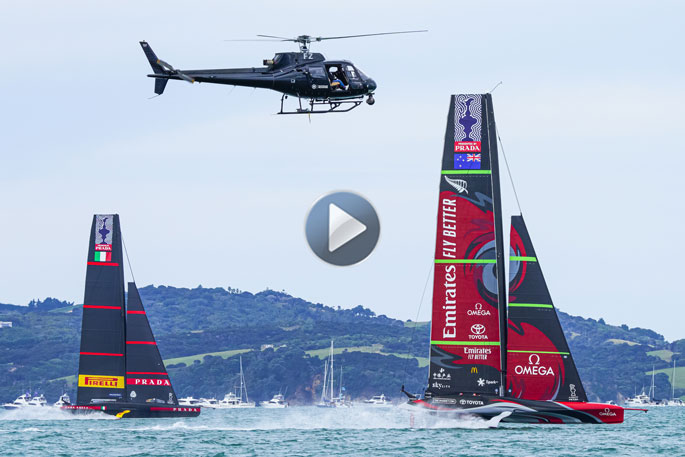 Emirates Team New Zealand and Luna Rossa Prada Pirelli are sitting at one/one after both teams won a race on the first day of the America’s Cup.

Day one of the 36th America’s Cup presented by PRADA didn’t disappoint with the defender Emirates Team New Zealand and the challenger Luna Rossa Prada Pirelli sitting on a tie after two races.

Pretty even performances between the two boats once again confirmed that there is no space for mistakes.

Race 1
With Emirates Team New Zealand entering on port, they chose to sail deep, then lead out to the boundary.

Luna Rossa Prada Pirelli followed, engaging them below the line, and giving Emirates Team New Zealand skipper Peter Burling a glimpse of the line to windward of the Italians - and he took it, starting strongly to windward at speed and on time, quickly gaining a lead of 18 metres on their opposition.

For race one of the 36th America’s Cup presented by Prada, this forced the Italians into a choice - hold on to the leeward position and try to gauge the speed of Emirates Team New Zealand, or throw a high risk manoeuvre to try for a foul.

Luna Rossa Prada Pirelli co-helmsman Jimmy Spithill luffed hard, trying for the protest and failed, slowing him and allowing Emirates Team New Zealand to ease ahead. Heading up to the first windward gate that lead extended to 160 metres, and rounding the top gate 14 seconds ahead of Luna Rossa Prada Pirelli, the focus now for Burling, Tuke and Ashby was to sail cleanly and keep a close cover on their opposition.

This they did, extending to 380 metres on leg two and 314 metres on leg 3. Both teams split at the bottom gate of leg 4, but this had little impact, with Burling heard to say, “lets take the easy option”, keeping it simple and rounding the final top gate 230 metres and 20 seconds ahead. Emirates Team New Zealand kept it tight to extend on the final leg to the finish, extending to 550 metres, winning race 1 by 31 seconds.

As Peter Burling commented on race 1. “Really happy with the pre-start and how the team has the boat in good shape. We should have probably hit them harder on the second beat, but happy with the boat and to finally get into racing. It’s been three months or so since we last raced - and great to compete against another boat rather than our chase boat.”

Race 2
With both teams changing down to smaller jibs for the increased shifty and gusty conditions, they were keen to reset and get into the second race of the day.

Luna Rossa Prada Pirelli entered on port, heading out to the boundary to gybe back to the line, with Emirates Team New Zealand staying high, tacking back in then soaking down to engage.

Coming back in late allowed Luna Rossa Prada Pirelli the lead to the line, and as in race 1, control of the race course in these conditions was strongly with the boat in front. Both boats sailed in the high mode up the first leg, looking for a chink in their opponents armour, but the boat speeds looked similar and so it was all about minimising mistakes. Luna Rossa Prada Pirelli kept it tight and headed into the first gate extending a 70 metre lead out to almost 300 metres after rounding the first gate ahead by 13 seconds.

Legs 2 and 3 saw Emirates Team New Zealand work hard to get out of phase with the covering Italians and make some gains.

This they did on leg 5, eating hard into the lead of Luna Rossa Prada Pirelli, with 12 seconds the gap at the final top gate.

With Burling and Ashby pushing hard looking for added breeze, the gap on the finish line was reduced to just 7 seconds, levelling the scores on the opening day of the 36th America’s Cup presented by PRADA to one win apiece.

As Jimmy Spithill commented at the end of the day “We just kept the boat going well, and it was a good sign of strength to bounce back after that first race. I think it was one of those race tracks where the lead boat had the advantage - picking the time to tack or gybe. It is great to be competitive!” 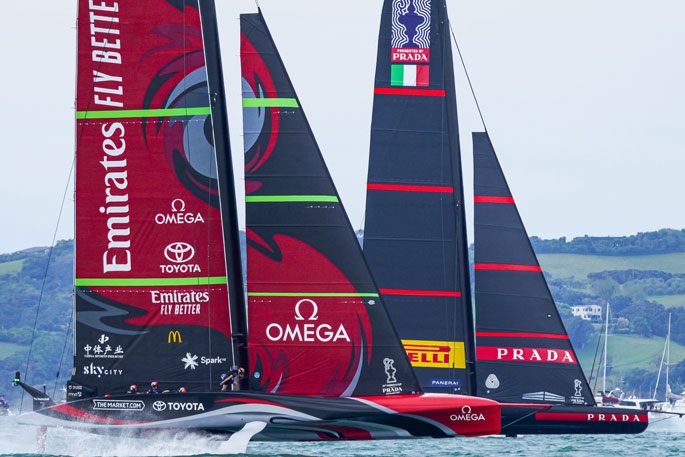 For Peter Burling, it was an honest appraisal of race 2. “We didn’t get the best start, not quite doing the best job of the roundup, and ending up skidding sideways and falling into them - which was a shame, and we looked a bit rusty there. What was really good was to be able to get back into them on that last beat. It is no secret we haven’t raced for a while - it was great to get the first win, but one mistake and life is pretty hard for the rest of the race.

“There is plenty to debrief and we know the team that wins the last race wins the event, so we are happy to get a win on the board and move onto the weekend. It felt like the boats were pretty even today - but we are happy we have a tool to win this.”

Yesterday’s results clearly show that there is a long way to go in this first to 7 points America’s Cup Match.

Old English proverb: “you only sing when you’re winning”. And just in case you lose you find a tenuous link to NZ somewhere in the winning team, just to steal some of their glory. The world’s worst winners AND losers.

Old Chinese proverb: "Keep your words soft and sweet, for you may have to eat them." :-)

Watch the start then have a snooze because whoever wins the start wins the ‘race’. Boat speed is irrelevant because the leader just blocks. Boring. Jimmy is the better sailor so Luna Rossa will win. End of.