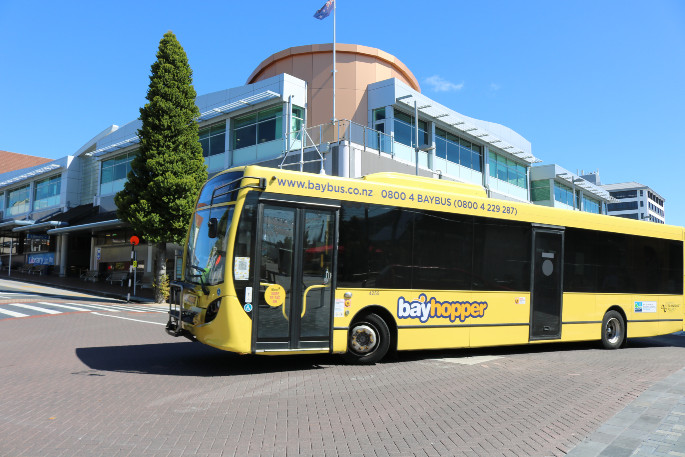 A yellow bus in Tauranga’s CBD.

The Bay of Plenty Regional Council say encouraging children to catch the bus may help them view public transport favourably.

The Long Term Plan is currently accepting public submissions, and one proposal is to have free bus fares for school students, tertiary students and community card holders.

Public Transport committee chair Councillor Andrew von Dadelszen says encouraging children to catch the bus may help them view public transport favourably and they will continue to use it during their adult life.

“We see value in getting our children to catch a bus, so that this habit becomes engrained.”

He says they are seeing a growth in traffic congestion across the region, but particularly in the Western Bay.

“The value imperative is that getting more students on buses may see less cars on the road during peak traffic times, especially around school drop-off and pick-up times.”

The initial fare-free trial held in Tauranga was put in place to help with traffic congestion in the city.

A statement on the Bay of Plenty Regional Council website says there are several reasons which prompted bus fares to be included in the LTP.

There is already a trial in place with free fares for Tauranga school students, which began in January last year.

When I looked into it all...Safety was the main reason given. 3 lanes merging. I know it was just smoke and mirrors but that was the reason given to us at the time.

@Lets get real If it’s stationary traffic they are after. They have done a good job. lol The thing is there. It is dangerous to have busses flying up the left hand side. Motorcyclists for example - They will use that lane no matter what and are entitled to as the signage does not say "Busses Only"(TCC can’t even do signage correctly) - It does up the hill in Hairini. But not lower down the hill where those 3 lanes merge. (I’ve checked sign requirements). So it is very very dangerous for motorbikes whom are legally weaving through stationary traffic and coming to use that lane. Busses are a lot quicker down that lane than the other traffic I assure you.

It’s not about three lanes of traffic there, it’s about a two lane bridge and a row of trees. Another two lane bridge at Maungatapu and Matua. We have a build for now, rather than the future mentality. But stationary traffic doesn’t cause accidents or fatalities and that is the focus.

@Lets get real. Hairini/welcome bay affects traffic imo. I see it daily. Lots of money spent to funnel everyone towards the same 2 round-abouts here. Reason given. It’s not safe to have 3 lanes merging. So they make one of those lanes a bus lane, as if busses are not traffic.

The buses in general are no faster around town than your private car.... Only three bus lanes in the city and only those on Hewlett Road make any difference to travel times.

The majority of bus stops dont have shelter let alone a seat which makes it very tiring at times Who wants to stand in the full sun or rain, definitely not me. Tauranga does have 8 electric buses which is great but surely they dont all have to be so big. Surely some runs must warrant smaller buses.

Should be much smaller than the great yellow leviathans that have to negotiate our streets. And they should be eco-friendly electric or hybrid. Smaller buses cost less to buy, run and maintain and you can easily add more units to cope with peak demand. I lived in Hampstead Garden Suburb for a while and was very impressed with the minibuses that serviced the narrower streets of the suburb, and the informal way people could get off at their house, or be picked up by signaling the driver.

Well done for Cr Andrew von Dadelszen encouragement to change the publics behaviour re car use. Is Andrew a current bus user? Probably the same response as Cr Clout, " I love my car" when he was challenged about bus use, during mayoral debates Set an example before you want to change behaviour

I used the bus on a regular basis for three destinations but two trips now back in my car as the route changes have be worse for my purpose. From one bus trip to get me to where I was going now require a bus change and a wait time up to twenty minutes as the connection time doesn’t coordinate at times. Not great in all weathers. This of course means a longer travel time maybe double or more. As I also carry stuff it’s no longer worth the effort. Maybe the extra connections suit more people ? not that I see anything in except near empty buses during the day. Hopefully route design and connection times are reviewed and improved . For me still bus if I have plenty of time not carrying anything and good weather. "Winter is coming"

I completely understand that some people rely on buses. But, there is no way any Council or Government will persuade me to use public transport. It is unreliable, a health risk (e.g. COVID-19, the Flu etc), and relatively expensive. Additionally, there isn’t a bus sitting on my drive at my disposal so that I can go wherever I want, whenever I want 24/7. Convenience plays a major role in the hectic lives of people......and buses/public transport does not offer that.

I’ll finish the headline for everyone. "By creating traffic congestion".

In exchange for a 30 something % rate increase for everyone and a sub-standard bus service. Get off the grass. User pay. Go away.