Superbike champs to wrap up in Taupo 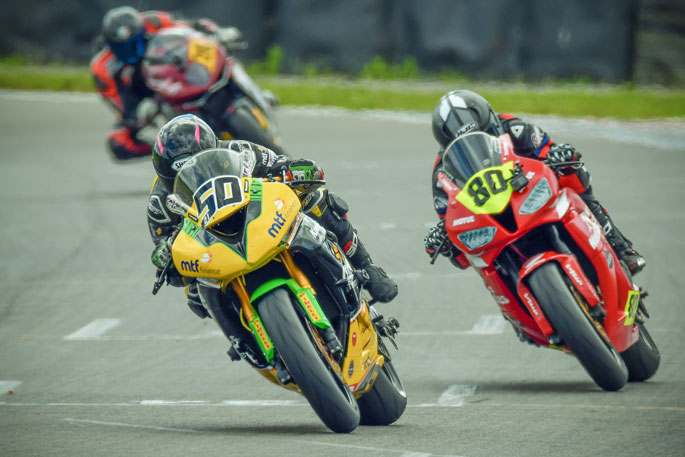 Expect close action such as this when the racing resumes at Taupo's Bruce McLaren Motorsport Park in a week's time. Photo by Andy McGechan, BikesportNZ.com

The 2021 New Zealand Superbike Championships event set for Taupo this weekend, will go ahead as planned.

A spanner was thrown in the works last week when the latest efforts by the Government to curb the Covid-19 pandemic forced Auckland into Alert Level 3 and the rest of the country into Alert Level 2.

This resulted in the abandonment of the planned Mike Pero MotoFest at Hampton Downs last weekend, a popular motorcycling extravaganza that also included on its packed programme the third round of four in the New Zealand Superbike Championships.

While plans may be continuing for the Mike Pero MotoFest weekend to be rescheduled at another time, the sport's governing body in this country, Motorcycling New Zealand, has decided next weekend's NZSBK racing at Taupo's Bruce McLaren Motorsport Park will be the third and now also the final round of the national championship series.

MNZ road-racing commissioner Grant Ramage says it's a shame to have to cut the series short.

"It's disappointing it has to be wrapped up in this way, but rider and spectator safety in these uncertain Covid-19 times and our keen efforts to ensure this is still a worthwhile championship have been the thoughts foremost in our minds," he says.

The Taupo event will follow the same format as previously advised, three races for each class over the two days.

A practice day at the track will also be offered on Friday.

The Hyosung and Ninja 400 Cup support classes will also run their final rounds at Taupo.

The first half of the 2021 NZSBK series was wrapped up in the South Island in January.

The four-round NZSBK series kicked off at Mike Pero Motorsport Park, Ruapuna, on the outskirts of Christchurch, on the weekend of January 9-10, with round two followed just a week later, at Levels International Raceway, near Timaru, and that set the series up for an exciting North Island phase to follow.

Whakatane duo Damon and Mitch Rees packed up their Honda bikes at the conclusion of racing at Levels with the two sibling rivals positioned 1-2 at the top of the Superbike class rankings.

Christchurch's Dale Finch (Triumph) has been unbeaten in the Supersport 600 class, winning all his races at Ruapuna and Levels, and Upper Hutt's Rogan Chandler (Yamaha) is safely second overall after the two South Island rounds.

One of the most impressive riders in the series so far has been 14-year-old Invercargill rider Cormac Buchanan (Yamaha), who won all but one of his 11 races at rounds one and two in the two separate classes he is campaigning this season – the Supersport 300 and Supersport 150 classes.