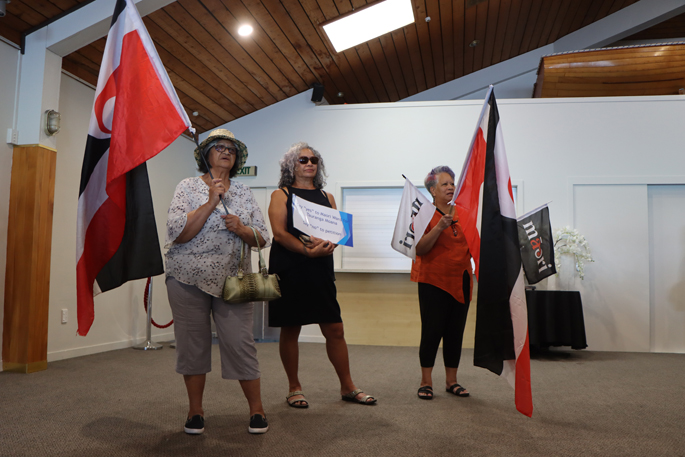 Protesters at the Tauranga Yacht and Power Boat Club during a public meeting about Maori Wards. Photo Mackenzie Dyer/SunLive.

A referendum on the establishment of a Māori ward for Tauranga has been formally cancelled after a change to local government electoral laws came into effect.

The Concerned Citizens Group submitted a petition opposing the establishment of a Maori Ward.

Emotion ran high at a public meeting discussing the implementation of the ward in late January.

Hundreds of people both in favour and against the petition attended.

Protesters standing with signs and Maori flags filled the back of the Tauranga Yacht and Power Boat Club room, behind rows of seats filled to the brim with other meeting attendees.

They argued their views are in favour of equality and Maori bettering themselves.

Some of the remarks were visibly difficult for protesters to hear, with many shaking their heads, and tearing up during the speeches.

The change, to the Local Electoral Act 2001, removes a provision in which a council’s decision to introduce a Māori ward can be overturned by a process in which at least 5 per cent of voters sign a petition requiring a binding poll.

A valid petition was received in February, by which time Local Government Minister Nanaia Mahuta had indicated that a law change would remove the poll provision. The council was obliged to continue preparations for a poll until the law change formally came into effect.

Tauranga City Council Electoral Officer Warwick Lampp says the law change had now occurred. This meant there was no longer provision for the poll to continue, and it had therefore been cancelled.

National or Labour. Hmmm. To me its like they are two sides to the same coin. Taking turns to screw us all from both angles, while also providing the required scapegoat for the other side of the house to place blame upon. They are the same entity!

... the Minister responsible, and her Government, next time you are filling in a ballot form. "You have to fight to keep your country..."... now let’s all take a little walk down to Wellington... (Not me, I’ll be watching you on TV...)... Oops! got a bit carried away there... Can we call a rigged Election if National lose next time? The only GOOD thing about this is that the kind of behavior we watched in America, DIDN’T happen here. I guess we are more grown-up than the Trumpists. But I still want our Democracy back.

Open up the back door and let the backroom deals begin. Anyone who believes that the best person for the job will be elected doesn’t understand honest democracy or the power of a surname.