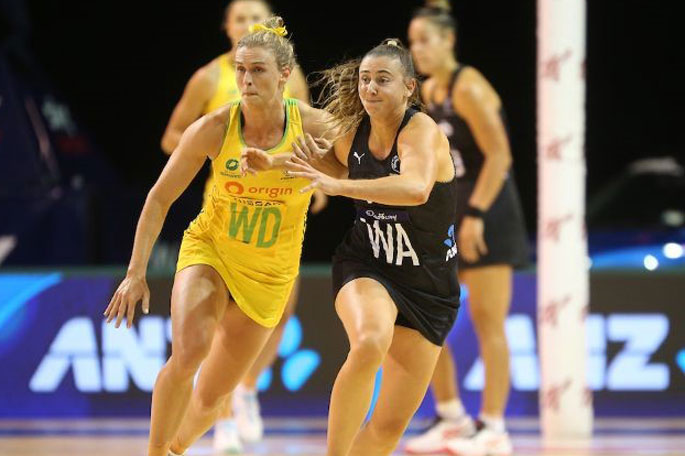 Captain Ameliaranne Ekenasio kept her 100 per cent winning record intact as the Silver Ferns delivered a well-crafted 49-44 win over Australia in the opening Constellation Cup match in Christchurch on Tuesday.

Played in front of an almost empty house due to the current Level 2 Covid-19 restrictions, the situation did not deter from a typically willing and hard-fought trans-Tasman contest.

The Silver Ferns are keen to get their hands on the Constellation Cup for just the second time since its inception in 2010, having won it just the once in 2012.

Both teams had their moments, neither with much preparation under their belts but it was the Silver Ferns who held the edge through much of the match.

But in winning the final quarter, the Diamonds showed they were finding their feet after being hotel-bound for the past two weeks and will be out for a lift in tomorrow night’s rematch.

With a wealth of midcourt talent on hand, the Silver Ferns opted for the well-performed trio of Gina Crampton, Claire Kersten and Sam Winders to start the opening clash while ever-improving shooter Maia Wilson got the nod for her first start against Australia.

For the Diamonds, goal attack Kiera Austin was given the opportunity to make her debut in a balanced Australian line-up, partnering the prolific Magic-bound Caitlin Bassett, who will turn out in the ANZ Premiership later this year. Dynamic wing defence Gabi Simpson also marked her return to international netball after time on the outer.

It was a measured start by both, the respective midcourts getting through a mountain of work to create openings before the Silvers Ferns broke the impasse halfway through the first stanza.

Kersten and Winders highlighted the combined Silver Ferns defensive efforts through the first half to keep Australia on the back foot.

Just out of managed isolation yesterday, and in their first international fixture in over a year, the Diamonds were laboured on attack and struggled against the constant attention of the Silver Ferns smothering defence.

Showing good structure on attack and strong ball retention, a string of five straight goals pushed the Silver Ferns out to a 14-10 lead at the first break.

The introduction of 1.9m defender Sarah Klau gave Australia the early impetus on the resumption but the Silver Ferns were able to absorb, repel and strike again.

While Australia kept pushing, some rustiness was evident, the Silver Ferns constant defensive pressure and calmness on attack giving the home side the edge heading into halftime with a handy 28-21 buffer.

In her first Test in charge, coach Stacey Marinkovich rung the changes for the second half with Verity Charles making her Diamonds debut at wing attack, the ever-busy Liz Watson moving into centre and the rangy Jo Weston going to wing defence.

With more ball finding its way into the dangerous Bassett’s hands, Charles adding quick release and speed to the equation and goal defence Courtney Bruce providing the spark with turnover opportunities, a five-goal unanswered scoring surge had the resurgent Diamonds well placed.

However, the injection of athletic defender Karin Burger for Sulu Fitzpatrick resulted in another momentum swing, the Silver Ferns consistent contesting keeping the pressure on the Diamonds, who struggled with consistency.

A late burst pushed the Silver Ferns out to a 40-31 lead at the last turn.