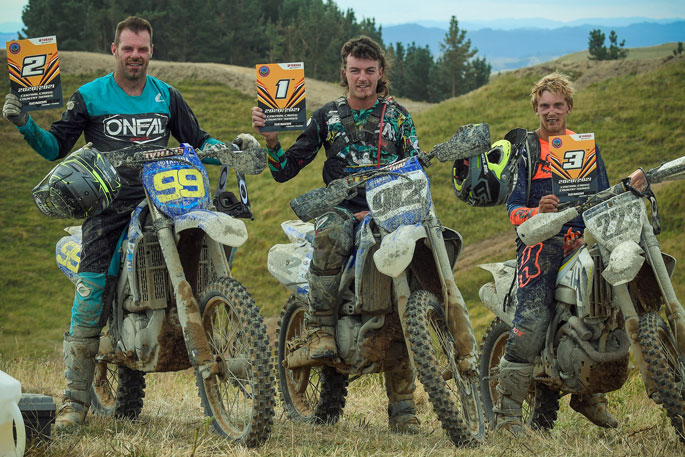 The Covid-19 pandemic continues to wreak havoc around the world, but the hardiest of Kiwis have once again knuckled down to find a way to carry on with their lives.

The 2020 New Zealand Cross-country Championships were abandoned when the virus first impacted on sports in New Zealand in March last year and, almost exactly 12 months later, a fresh outbreak again threatened to end the competition before it had really begun.

As Auckland was put on Level 3 alert and the rest of the country set at Level Two conditions at midnight on Saturday, plans to run the opening round of the Yamaha-sponsored 2021 New Zealand Cross-country Championships near Marton on Sunday was thrown a curve ball.

At virtually the last minute, organisers were told that medics would no longer be available to attend the event and a mad scramble followed to find an alternative or no racing could take place.

Right up until about half an hour before the racing was due to begin at Marton on Sunday morning, event organisers were considering an abandonment.

Fortunately a paramedic made themselves available and racing could finally go ahead, many of the riders having already arrived in the region well before the pandemic restrictions had been announced and comfortable in the knowledge that racing could continue without flouting the fresh Level Two restrictions for the region.

"It was a bit of a drama for us to get this happening," says Motorcycling New Zealand cross-country commissioner Chris Smyth.

"We spent a couple of hours ringing around medics between 11.30pm and midnight, but thanks to help from (MNZ national series steward) Lauren Stockley we got it all organised and we were only half an hour late getting started.

"As for the racing, this track was probably a bit more demanding for the junior riders than is generally the case, but this is meant to be a test for them. It wasn't impossible for them anywhere."

Taupo's Wil Yeoman led from start to finish to dominate the 90-minute junior grade race overall (and in his premier up-to-300cc four-stroke class) on Sunday morning, crossing the finish line half a minute ahead of runner-up rider Luke Brown, from Eketahuna.

Rotorua's Daniel Bates was fourth overall and was best of the junior up to 200cc two-stroke class riders, while Masterton's Max Williams (eighth overall) claimed the 85cc junior class win.

The three-hour senior race in the afternoon was less cut-and-dried.

Taupo's Wyatt Chase led from the start but he soon had Napier-based former Wairoa rider Tommy Watts nipping at his rear wheel.

Watts took the lead and never looked back, while behind him it was fierce battle for the top spots between Chase, another Napier-based former Wairoa rider in the shape of Reece Lister, Raglan's Brandon Given, Hamilton's Sam "Charlie" Brown and a hard-charging Paul Whibley.

Palmerston North's Whibley had be trapped in traffic at the start but was quickly moving forward from the back of the pack and, by the halfway stage of the race, he was up to fifth.

It ended up with Watts taking the outright win by just 20 seconds from Whibley, with Lister claiming the third podium spot, crossing the line three minutes later.

"I had a terrible start and it was so dusty and hard to pass in that first lap," said the 19-year-old Watts afterwards.

"I was back in about 15th position, but I just chipped away and then took the lead on lap two (of seven). I knew Paul (Whibley) was coming and I had a crash on the last lap. That rattled me and he caught right up, but I held on until the end."

Round two is expected to go ahead near Dannevirke on Sunday, March 14, before the riders head to the two South Island events that will wrap up the series, at Gore on April 17 and at Mosgiel the following day.

Points from only the best three results from the four rounds will be counted towards the championship titles, with riders to discard their worst result. This also allows competitors the option of having to make only one trip across Cook Strait.