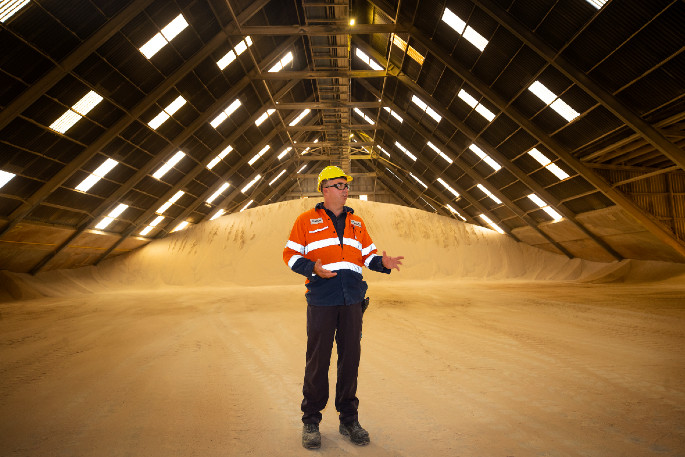 Mount Maunganui site operations manager Charlie Bourne standing where the shipment will be stored once it arrives in Tauranga. Photo. John Borren.

The latest in a controversial shipment of phosphate rock from Western Sahara is set to arrive in Tauranga this weekend.

The IVS Phoenix is scheduled to arrive at the Port of Tauranga on February 27. The vessel is carrying approximately 56,000 metric tonnes of phosphate rock mined in the disputed territory of Western Sahara in North Africa.

Mount Maunganui-based Ballance Agri-Nutrients, who have sourced the material from the region since 1989, chartered the impending cargo. It is their first arrival of 2021 with an expected annual amount between 150,000 and 200,000 metric tonnes.

Previous shipments of phosphate rock from the area have been met with protests in Tauranga due its origin.

Western Sahara is a disputed territory in Northern Africa. Morocco has governed the territory since 1975 when Spain gave up colonial rule. The Polisario Front, a national liberation movement representing the indigenous Saharawi people, are seeking independence and consider Moroccan rule an invasion of their territory.

The United Nations established a mission toward a referendum regarding independence in 1991, but that is yet to materialise. A ceasefire between Morocco and the Polisario Front that had existed since 1991 ended in November.

This conflict and the disputed sovereignty of the area in which the phosphate rock has been mined has led to the popularisation of the term ‘blood phosphate’.

Ballance strongly oppose this phraseology, labelling it highly emotive and disrespectful. They insist the terminology oversimplifies a complex topic. However, Mike Barton, of Western Sahara Campaign New Zealand (WSC-NZ), stands by the term.

“We said plunder and war booty - that is the reality,” says Barton. “I think the companies involved have always had a bit of a corporate guilt about things. I think they know they are on shaky ground.”

Phosphate rock is used in superphosphate fertiliser and is considered crucial to New Zealand’s agricultural needs. Ballance suggest agricultural production would be halved without it. Due to its physical and chemical properties, no other alternative is said to offer the same performance as Western Sahara rock.

“It’s got a high phosphorous content, which is what is desired,” explains Mount Maunganui site operations manager Charlie Bourne.

“The super phosphate, what we produce, is best for New Zealand. It’s also really low in cadmium. There are other sources of phosphate but they have a high cadmium count.

“We could source from other sources but what would end up happening is we would poison the soil. We would not see an immediate impact now, but 300 years from now you have pretty much killed all your kids and grandkids.”

Kamal Fadel is the Polisario Front representative to Australia and New Zealand. He suggests the claim New Zealand cannot source from elsewhere is baseless, citing an example of three Australian companies who stepped away from phosphate rock originating from the Western Sahara region.

“They have been really intransigent and strong-headed,” claims Fadel. “These companies are just looking at it from a profit point of view and have not taken into consideration the legal aspects or the moral, ethical aspects of this trade.”

It is a claim disputed by Bourne.

“We pay a premium for the Boucra rock because of the low cadmium. So we could bring in something with a high phosphate content, but it would have that hike in cadmium.”

Megan Clarkin, communications advisor for Balance, reaffirms that the cadmium issues remain a key reason behind their continued use of rock sourced in Western Sahara.

“That’s the difference,” says Clarkin. “Cadmium builds up over time. It doesn’t go away. That’s what is unique about New Zealand.

“It is a tricky thing to get across because other places don’t have the cadmium issue New Zealand has, so for them they can change their source. We’re always looking at other sources and other ways from around the world but that cadmium content is an issue.”

Ballance ensure they are working in conjunction with a United Nations framework for operating economic natural resources activities in a non-self-governing territory, such as Western Sahara.

The framework insists that operations should provide direct and indirect benefits to inhabitants of said territory, including economic advancement.

Ballance are keen to point out that there are thousands of Saharawi who live and work in Moroccan-administered Western Sahara.

“While all parties seek a solution, the protestors don't appear to consider the risk of ceasing trade to the livelihoods of the Saharawi who are employed by OCP,” says Ballance head of communications Aimee Driscoll.

“It is not clear how the loss of jobs in a volatile part of the world would progress the issue of Western Sahara's political status.”

Ballance currently source their phosphate rock from mining company Phosboucraa, a subsidiary of Moroccan fertiliser company OCP. OCP claim all profits from the operation supplying New Zealand’s phosphate are reinvested in the region.

But Fadel disputes that claim, suggesting money will go toward the Moroccan treasury and does not benefit locals.

“If you talk to people inside Western Sahara itself, they will tell you they have no benefit - they live in poverty,” Fadel continues. “It is white-washing, window dressing, and not based on reality. It is propaganda. The Saharawi do not benefit.”

It is a claim Ballance CEO Mark Wynne strongly denies.

“Ballance absolutely refutes the suggestion that any money received from the sale and purchase of phosphate rock from Phosboucraa is returned to Moroccan authorities, the parent company, OCP, or any other entity.”

Fadel is now imploring the government in New Zealand to intervene and take a stronger stance.

A spokesperson for the Ministry of Foreign Affairs and Trade say they are supportive of the United Nations process in Western Sahara, including the exercise of the principle of self-determination by the Saharawi people. They continue to monitor the situation in Western Sahara and call on both parties to return to the ceasefire.

“Companies importing from Western Sahara must comply with relevant legal obligations and import at their own risk,” says the MFAT spokesperson.

“Companies have been encouraged to look for alternative sources, as well as to continue to develop and invest in technology that would make importation from a range of sources more viable.”

WSC-NZ head Mike Barton has confirmed protest action is being planned for the latest shipment’s arrival. Ballance are keen to point out that the right to peaceful protest was an innately Kiwi right. Any protests at the plant would be accommodated as long as they remained peaceful.

Bourne says that people with questions should contact the company, whilst remaining understanding of peoples concerns.

“It is just trying to get the understanding out there,” says Bourne, “to educate people on what we do, why we do it and the steps we take to do it properly in with the best interests of everyone, not just us and our shareholders.”

Fadel, however, suggests the nation’s reputation is being harmed by the continued use of resources mined in Western Sahara. He has a message for ordinary Kiwi citizens.

“Our people have suffered a great deal from oppression, occupation and they live in refugee camps in dire conditions while you benefit from our resources.

“These companies are not listening and they are putting no effort into stopping this illegal importation of stolen goods. It’s why we call it ‘blood phosphate’.”

@morepork & dumbkof2. Yeah...It’s this sort of thing that creates terrorists/ill feelings towards our comparatively wealthy nation. This phosphate issue is causing substantial problems for the people where it’s being sourced as I understand. Compassion required urgently to help them or change our ways/practices to help them. No compassion and working together on a way forward. Terrorists will be created. Not their fault either. Ours.

You are right, of course, but when it is people being forced by War to live in horrendous conditions, we can cut them more slack...I’d moan and grizzle if I had their life (even though I’d be trying to do something about it...). The obvious answer here is for us to seek alternative low-cadmium phosphate sources. Meanwhile, we need to stay out of the Politics (today’s rebels, could be tomorrow’s Government... and I’m sure the issues are not just black & white...) , and we have little option but to continue sourcing from there if that is the only current source available. (Single supplier is ALWAYS a bad position for any business. It needs to be looked at with more seriousness...)

there is always someone moaning and grizzling about something