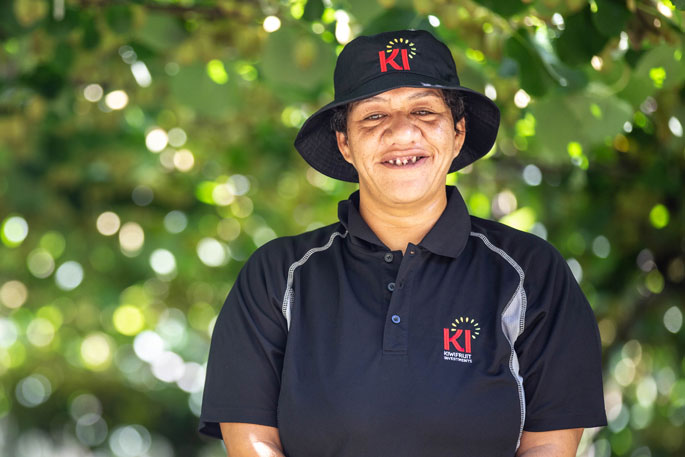 Stacey Marino is a perfect example of how finding your ideal career can materialise when you least expect it.

The 38-year-old mum of three from the Eastern Bay of Plenty area is a full-time orchard supervisor. But she’s worked her way up the kiwifruit ladder, starting as a seasonal kiwifruit contractor and upskilling herself along the way.

Prior to working in the industry, Stacey was an apprentice chef at a restaurant in Paengaroa, and before that was working as a wool handler at Mt Ida Shearing in Central Otago. However, it wasn’t until she was living in Te Puke in 2015 that kiwifruit caught her eye.

“I kept getting asked if I worked in kiwifruit because you can’t live in Te Puke and not have worked in the industry,” Stacey laughs. “So, I thought I’d go into the packhouse and see what it was like. I loved it, and it grew from there.”

Starting as a packer, Stacey quickly grew fond of the variety of jobs on offer and the diverse people she was getting to work alongside.

“I love the way so many cultures end up working in the kiwifruit industry,” she says. “You get to learn about where they’re from, their countries and a little bit of their language too.”

In her first season, Stacey went from packing to grading the kiwifruit.

“Then I was asked if I wanted to stay on when the kiwifruit season finished, so I did the re-pack season, going back through all the pallets and checking over the fruit before it ships out,” she says.

“The following season, I got asked to be a packaging supervisor, teaching others the skills I learnt in packing and grading.”

Stacey initially thought working in the kiwifruit business would be a linear job. Yet, she says she’s been pleasantly surprised by the work, support and growth the industry offers.

“I honestly never thought I’d rise that fast within the packhouse,” she says. “The industry has an array of jobs and so many areas to branch off in, whether it’s in the packhouse or the orchard.”

Curious and eager to learn the ropes, Stacey headed outside to the orchard the following season to try her hand at fruit thinning.

“I decided I loved it more than being in the packhouse because I enjoy being outdoors,” Stacey says. That was two years ago.

Along the way, Stacey has taken the initiative to develop her skills and further her on-the-job training with a Level 3 certificate in horticulture at the Open Polytechnic. She’s also about to start her Level 4 in horticulture production at Toi Ohomai Institute of Technology, and recently completed a winter pruning course, developed by New Zealand Kiwifruit Growers Incorporated.

“Winter pruning is a tricky task because you’ve got to make sure you’re picking the right canes and don’t cut too much,” Stacey says of the five-day initiative, as funded by the Ministry for Primary Industries.

“It’s one of the hardest things to pick up in the kiwifruit orchards,” she says. “Growers don’t take just anyone on for the job because it’s high risk and you can do a lot of damage to the crop.”

By attending the course, Stacey learnt how to prune and what to look for. “It gave me a piece of orchard production that I was missing,” she says. “I’ve gained a lot of confidence from the course and recommended it to a lot of people.”

It was during the programme that Stacey got chatting with a worker from Kiwifruit Investments. Encouraged by the positive feedback, she met with the kiwifruit management company, and another door opened.

Today, Stacey works as an orchard supervisor for Kiwifruit Investments, despite having a fear of bugs.

“I heard rumours it was hard work, and it is, but with good techniques and training it makes the job a lot easier,” Stacey says.

“Even though I’m getting older, I’m always upskilling, going forward, learning and being rewarded for it,” she says. “Supervisors and managers will spot you out and advance you. They put a lot into helping people, and giving them different skills and areas to work in.”

While her mentors help her, Stacey supervises 12 to 18 workers, including backpackers, New Zealanders and Recognised Seasonal Employer (RSE) workers from the Pacific Islands.

Stacey’s 17-year-old son is currently part of her team, earning some money over summer before heading off to study at the polytechnic himself.

“I work with so many different people and help them find their talent. If there’s an area in the kiwifruit industry that I can help them go into then I’ll speak to somebody who can help them get into things like forklift driving or the laboratories,” Stacey says. “Watching somebody learn and love the job is the most rewarding.”

For Stacey, it’s every part of the job that gets her motivated for work every day.

“I really enjoy the work because it’s always changing, and I enjoy teaching people,” she says. “I love learning new things, and the industry is always evolving.”