National: Gang numbers of the rise in the BOP 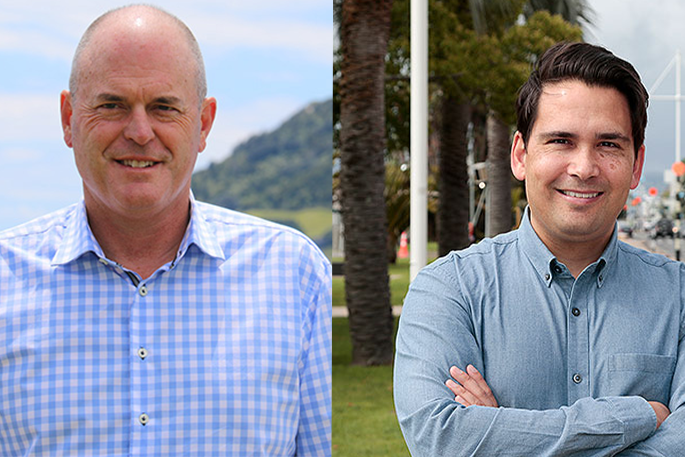 There has been a spike in gang numbers in the Bay of Plenty, according to National MPs Simon Bridges and Todd Muller.

Tauranga MP Simon Bridges and Bay of Plenty MP Todd Muller say the spike in gang numbers is a result of the government's "soft on crime approach".

Figures released to National show gang numbers have grown to almost 8000 nationwide, with a four per cent increase in patched members in the Bay of Plenty police district in 2020 and a 41 per cent increase since the Labour Government came into office in late 2017.

Bridges says it is time for action.

"The Government needs to acknowledge the gang problem in the Bay of Plenty and get tougher on crime.

"Gangs do nothing but peddle misery, inflicting violence and harm on the good people in our communities.

“It is concerning they are gaining such a foothold in the Bay of Plenty. I worry that good people in our communities are becoming targets of their illegal drug trade and other serious crimes."

Last year, 798 people joined gangs across New Zealand, with many hundreds more potential members being prospected, according to figures released by National.

To combat this, Labour must deliver on its 2017 promise of 1800 new frontline police and urgently adopt National’s draft legislation to make Firearm Prohibition Orders legal so Police have the powers they need to seize guns from gangs, says Muller.

“As gang numbers continue to rise, so will the amount of serious crime and violence in our neighbourhoods, where people have a right to feel safe," says Muller.

“The Government can’t continue to pretend this isn’t a problem. Urgent action is needed to strengthen our laws and give Police tools they need to combat gangs before it’s too late."

SunLive has contacted Labour for a response and will publish their reply as soon as we can.

It’s good to see, and extremely rare, to see an MP say what they think and what needs to be said. The vast majority are more interested in themselves and getting up the greasy pole and their only role seems to be to stand behind the leaders nodding like a plastic toy.

It’s extremely difficult to fight with both hands tied behind your back, blindfolded and without the ability to gain intelligence without going to the courts on bended knee, asking nicely if they will give you permission to carry out an operation. About time we instituted new laws that allow and encourage draconian measures towards the organisations that are highly involved in antisocial and criminal activities... JUST AS LONG AS WE’RE ALL KIND TO ONE ANOTHER.... Tui advert material

Good money in putting people in prison these days. (Serco) Could be why our social/economic system produces more and more every day. Should be more focus on prevention. Solve the reason why the gangs exist. Money problems is one major factor for example. People being labelled at school as going to succeed/not going to succeed. No trust or faith in the govt. etc etc etc Thanks

The underlying causes need to be addressed. Disillusioned young people see easy money and a bad reputation, as being something that gives them identity. There needs to be more positive alternatives to channel their energy into. (Sport, Community service (not as a punishment, but actually helping people...) But, at the moment, the best we can do is clamp down on illegal gang activities. I see school programs like Kiwi Can as being a positive and effective way to combat gang recruitment and it deserves more support.

Merlin you are probably quite right, but I wonder just how much influence is put on the soft NZ judiciary. I certainly agree Yadick’s comments re Labour’s slack approach to the gang problem.

This isnt NZ police or labours fault its that catch and send to NZ at fault . As for Bridges it all started when he was on the government of the day .... Lest I also say that same with the housing.

I’ve never been a big fan but he has gone up in my estimation recently. He is bang on about the wet lettuce in charge of Police. Bang on about wokesters. And calling that buffoon who is Speaker of the House a “tw@t” was also bang on. Well done Simon.

And of course Arderns lot are repealing three strikes so that violent thugs will get out early. Labour’s catch and release policy.

Get up to date`

Get up to date head of Comancheros 10 years jail ,guns,assetts and cash forfieted.A Nation wide operation currently going and in the last few days another bust gang related with guns ,assetts and cash forfeited.The Police are doing a good job even if Simon does not think so.

The NZ Police are doing a great job hammering these scum at present and seizing assets of crime. I do wonder though if pressure needs to be put on the smaller members before their status grows. These fortified gang pads such as in Birch Ave need dealing to. The obnoxious motorbikes need dealing to. They need a total wipe out and I agree with National that Labors softly, softly approach needs canning and they need to take reality onboard and deal to the gangs. GO HARD, GO STRONG - Seems to have worked for other diseases that tried to rear their ugly head and intimidate us all . . . Send the Aussie ones back too.