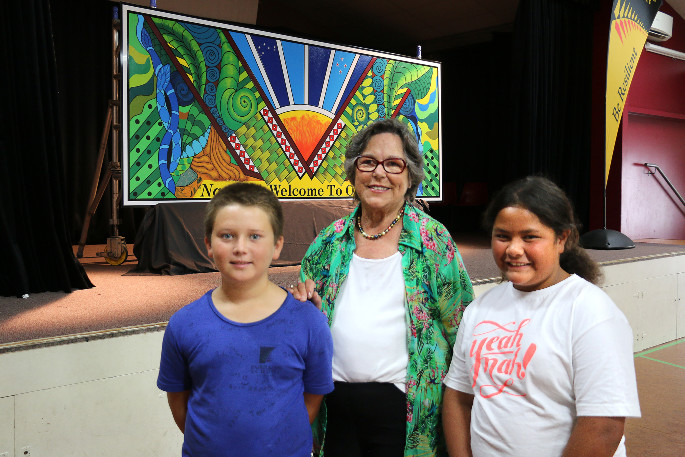 The students of Fairhaven School gasped in awe as the new mural that will welcome people to the school was unveiled.

Every facet of the artwork tells a story; the green and gold woven in the centre represents the kiwifruit orchards, the four bold brown lines show No, 1, 2, 3 and 4 Roads that divide the school catchment and the Kaituna and Rarapahoe Rivers are depicted with multiple shades of cascading blue.

Named ‘Our Place – Our People’, it will be mounted at the front of the school and celebrates the establishment’s 65th anniversary.

The bold mural is the labour of love of Tricia Haine, who sketched the design on a sheet of paper using coloured pencils from a classroom before enlisting the help of Jason Gibney at Evocom Signs to scale up the size.

Tricia volunteers in a classroom two days a week and took on the challenge of bringing the mural to life.

Around 20 students, as well as principal Paul Hunt and deputy principal Vicki Hiini, have also painted a part of it.

Tricia says it is special to think that children can look back years from now and say they were involved.

“The heritage is lovely,” she says. “What an opportunity for them, as eight and nine year olds, when they're 10 years older, they can still drive past and say: ‘I did that bit’.

“The students did a great job and it was a challenge because they had to be very precise and learn to use a paint roller.”

Paul says the mural draws together all aspects of the people that come to the school, have been there and will go there.

With a government initiative focusing on teaching local history, the mural and the story it tells will be part of curriculum.

“In the past, it would be more a mural that we maybe would talk about occasionally, whereas now it'll become an integral part.”

It will also have a QR Code that can be scanned to tell the story in Te Reo and English.

Tricia didn’t realise quite how big the project would be, but she has enjoyed working through different challenges and spent countless hours painting. She started work in November and finished in mid-January.

“I’ve had a big bucket list, but this wasn't on it!” says Tricia, who now has plans to get students involved in restoring some of the other artworks in the school.