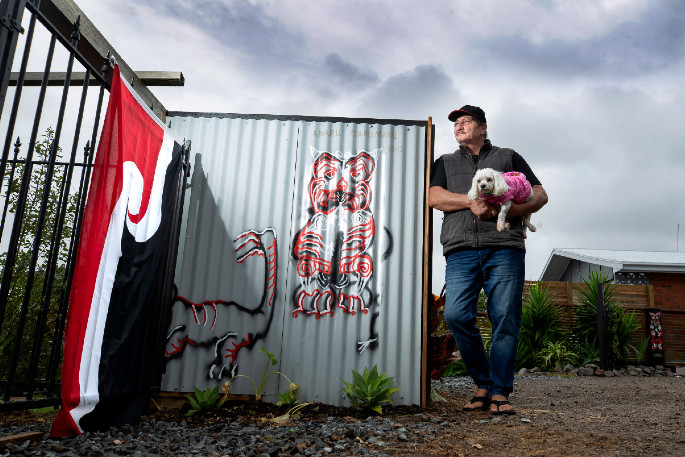 James Parker is disheartened by his artworks being regularly vandalised. Photo: John Borren.

“Heart breaking” is how a Tauranga man describes the regular defacing of his cultural artworks.

James Parker has painted Maori designs on panels of his fence, inside his property, and claims a neighbour is rubbing dirt on them when he’s not at home.

The first time it happened the neighbour allegedly painted over the designs at his Welcome Bay property, but James re-painted them. One of the works honours his great, great, great grandfather Anaru Marumaru.

The dirt is being rubbed on them about once a fortnight claims James, who says it is disrespectful and like “rubbing dirt” in his and his relatives’ faces. His iwi are Nga Puhi and Tainui.

The most recent incident was around two weeks ago when he went out for an hour to get groceries.

“I don’t feel safe, but more than anything, it's very, very disheartening,” he adds.

“The neighbours are building a house next door and they think the artworks will devalue the sale of their property.

“It’s all money generated, there’s no other reason.”

James also says he has video of the neighbour saying: “I’ll see you in hell” to him.

They have both owned their land for four years and James subdivided his section and sold it to the neighbour.

He painted the artwork around a year ago when he was building as a form of protection for him and his land.

James has filed three complaints with the police but has not made any progress with them yet.

“The lack of response from the police is upsetting as well,” he says.

A police spokesperson has confirmed three complaints of willful damage have been made, with the most recent being on January 31.

The spokesperson says the officer in charge isn’t able to provide any further information, but police are asking anyone with any new information in relation to the incidents to call 105.

A police spokesperson said: “If there is any new information that comes to light, that will be assessed.”

SunLive has tried to make contact with James’ neighbour, but has so far been unsuccessful.