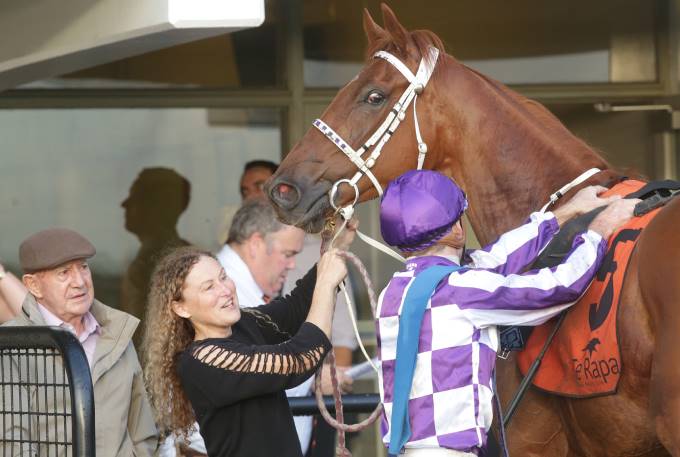 In form Tauranga trained horse Gold Watch has one jockey effusive in praise.

Gold Watch is trained and owned by Tauranga based Cliff Goss. The 89-year-old retiree has hit the jackpot with the four-year-old, who has now won all four of his races in the 2020-21 season.

Goss bought Gold Watch off the farm at Trelawney Stud, which is run by his daughter Cherry Taylor and his son-in-law Brent Taylor.

Gold Watch showed promise in training as a three-year-old, but he finished a long last at his first start in November 2019.

After a suspensory ligament injury was discovered Gold Watch underwent shockwave treatment and was given a rest period.

Upon returning this season he has won a 1200m maiden at Tauranga and then 1400m events at Te Rapa and Ellerslie.

Jockey Jonathan Riddell guided the gelding to his most recent win over 1400m in a Rating 74 contest at Te Rapa.

"He excites me. He’s the bee’s knees," says Riddell.

"He takes a bit to get around the corners, and then on Saturday I was actually going quite well and then he got a bump from Acutus, which put me off stride a bit and made it a bit tougher."

Riddell has now ridden Gold Watch to four successive victories, and is clearly hopeful he can get to ride the in-form horse again soon.

The horse has generally been given four to five weeks between races and Riddell is unsure of the future plans of Goss and his prized winner. However, wherever the exciting Gold Watch crops up next Riddell will be hoping for another win.

"I’ve ridden him four times now, and it’s like he knows where the winning post is,” Riddell says. “I think he’s pretty special."