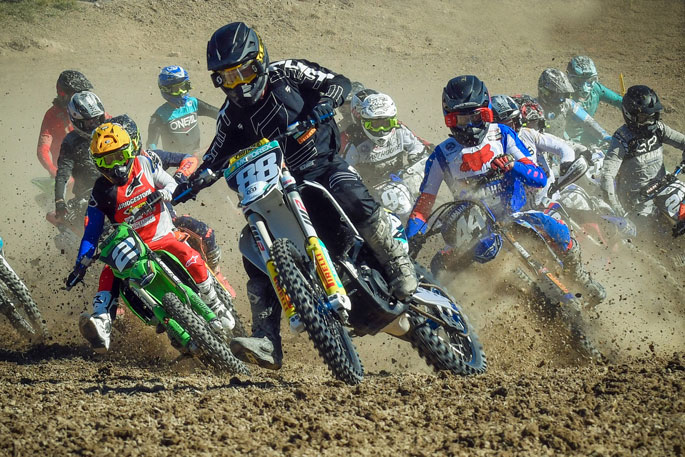 Expect more close racing like this when the gates drop in Rotorua on Sunday. Photo by Andy McGechan, BikesportNZ.com

It's all systems go for more of the same at the second round of the 2021 New Zealand Motocross Championships, near Rotorua this coming Sunday.

Initially there had been fears that last Sunday's announcement by the Government of enhanced Covid-19 pandemic control levels, following concerns over a community outbreak of the virus in Auckland last week, would impact drastically on this weekend's event.

However, those fears evaporated yesterday afternoon, when restrictions were eased and, with the Auckland region at Level Two and the rest of New Zealand at Level One, Sunday's racing can now go ahead as planned.

"We remind all to sign in and scan, and that includes mechanics and supporters. We all need to do our part and also support the host Rotorua Motorcycle Club."

Bragging rights in the premier MX1 class were shared at Woodville, West Auckland's Hamish Harwood declared overall winner of the class but, with a different scoring format used to decide the winner of the coveted Woodville GP title, it was Taupo's Wyatt Chase who took that trophy.

It matters not, however, because there is really nothing between these two riders and they are separated by just six points at the top of the championship standings.

In fact, there are only seven points between the top four in this class, with multi-time former national MX1 champion Cody Cooper, from Mount Maunganui, and Hamilton's Kayne Lamont breathing down their necks.

No matter what happens on Sunday, those gaps are all likely to change, the steep course at Rotorua always offering up surprises.

And this means nobody can take anything for granted and this weekend's showdown at Phillips' farm property, just 20 kilometres south-west of Rotorua, on State Highway 30 at Horohoro, could be pivotal in terms of eventual title winners.

It's a little more clear-cut in the MX2 (250cc) class, with Mangakino's Maximus Purvis unbeaten in the 250cc races at Woodville. Even so, he is only six points clear of his nearest challenger, Oparau's James Scott, with fellow former Kiwi international Josiah Natzke, from Mount Maunganui, just four points further back.

In third overall after round one, and just five points adrift, is Clevedon-based former Rangiora rider Cobie Bourke.

After Rotorua, the championships continue on at Pukekohe on Saturday, March 20, and the final round at Taupo will go ahead the following weekend, on Sunday, March 28.

Senior NZ Motocross Champs points after round one: