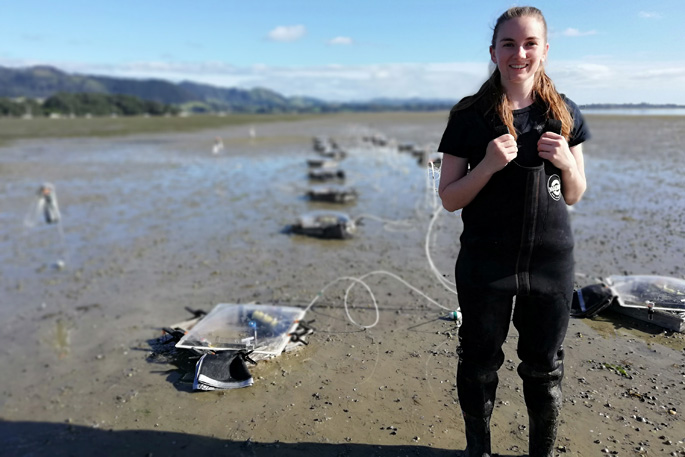 Georgina Flowers’ doctorate research, funded by the University and the Bay of Plenty Regional Council, focuses on the effects of land-based sediment coming into the estuary. Photo: Supplied.

The group of 15 PHD students hope their findings will contribute to national and worldwide efforts to monitor and improve estuary health.

Estuaries are where freshwater rivers meet the ocean, and where people live and visit.

The estuaries dotted along New Zealand’s coastline provide many economic and recreational opportunities like swimming, boating, sightseeing and collecting kaimoana.

“Estuaries are fascinating places to study scientifically because they are so complicated,” says Professor Pilditch.

“There are a lot of different habitats and different things happening.”

But they are also difficult to manage.

“Because estuaries lie between the interface of the coast and the sea, they gain pressures from both areas, but they also slip between the gap of marine and freshwater management.

The problem with sediment

Last year, a Parliamentary Commission for the Environment released a report on the state of estuaries in New Zealand. It did not paint a very rosy picture.

One of the main culprits is nutrient rich sediment running off the land, often due to human activities like earthworks for new subdivisions or intensification of land use.

Georgina Flowers’ doctorate research, funded by the University and the Bay of Plenty Regional Council, focuses on the effects of land-based sediment coming into the estuary and how they impact the ecosystem.

Her fieldwork, carried out at 11 sites across Tauranga Harbour, looks at how increased inputs of sediment into the estuary leads to an increase in the mud content of the sediment and how that affects the oxygen production, or productivity, of organisms such as seagrass and microalgae.

Over the course of two years, Georgina also seasonally measured the effects of decreased light availability at one site in particular, Tuapiro Point about 50km north of Tauranga.

“Terrestrial sediment is a lot finer than normal marine sand, so it stays in the water column a lot longer, before it settles and decides where it wants to go,” she says.

“This means that the amount of light that is getting through the water column is being reduced especially in areas that do not have much of a current.”

International PhD student Natalie Prinz arrived last year from Germany and works as a doctoral assistant at the University of Waikato Tauranga campus. The University and the Sustainable Seas National Science Challenge jointly fund the first part of her PhD project.

Natalie’s fieldwork site is also at Tuapiro Point. Her focus is to aid the recovery of degraded estuaries and her tools are the natural habits of the New Zealand cockle and wedge shell - two unsung heroes of our shellfish species.

Although they live largely under the visible surface of sand flats, it is here that both species do valuable work, distributing oxygen and nutrients. This may help the ecosystem to regenerate faster after a disturbance event.

“We want to try to support the system and aid the recovery by using the endemic, or local, species in the estuary sediment,” says Natalie.

Jack Hamilton is interested in the processes that affect how much carbon is buried in unvegetated estuary sediments.

His research, funded by the University and the Waikato Regional Council, was undertaken at six estuaries between Tairua in the south and Whangateau in the north.

“I’m looking at the balance between how much carbon is buried versus how much is released as greenhouse gases to the atmosphere each year from these habitats to get an idea of how this may change with sea level rise and other environmental stressors.”

All going to plan, Jack expects this research will help provide information of where New Zealand is placed to meet its 2050 carbon neutral goals.

“There’s a lot of value in keeping our estuaries healthy and it has high cultural significance for tangata whenua.”

“Estuaries are under stress globally and many of the pressures are similar - increased sediment and nutrient inputs from land and climate change.

“Our research at the University of Waikato will not only inform estuary management here, but is relevant internationally too.”